Twelve Rookie Writer Mistakes and How to Mend Them 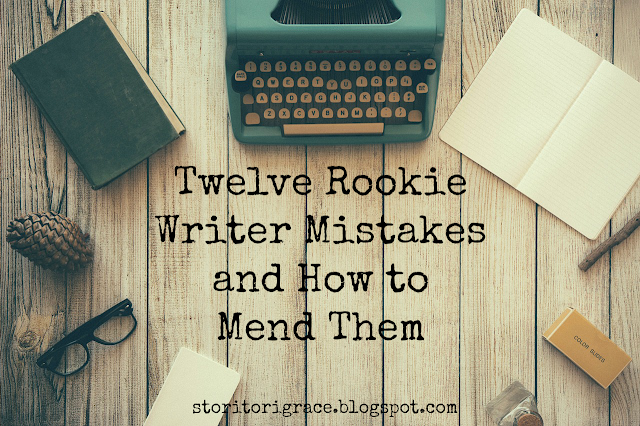 For the past couple of weeks I've been critiquing several young writers' works. I like helping them out, and it helps sharpen my eyes for critiquing my own works. But while I was doing it, I noticed some errors common in all of them and were also very common in my own past writing.

I'm not a professional or anything, but I've been seriously studying writing for four years, including attending four writers conferences. I hope these tips can be helpful. :)

1.) Telling of the Senses: Saw, See, Look, Heard, Listen, Felt, Knew - These words are cumbersome to sentences. They slow down pacing. 90% of the time they can be cut. There are a few instances where they are necessary, but if you use them over and over they get repetitive. They're an easy fix and they make the point of view deeper.

2.) Telling Emotions - I see this a lot. Telling emotions doesn't allow the reader to be as immersed in the story as much as she/he could be. A lot of common ones I've seen are: sadly, angrily, and surprised. This is a little bit tougher to fix. You have to think of how to show the emotion, but it's possible and your reader will feel more connected with your characters. Sprinkle in some interior monologue if you have to.

3.) Crowding the Dialogue - A lot of times I see a line of dialogue with someone else's action at the end or even more than one action. That's incorrect. Every character needs his own line for speech. Sometimes it gets very confusing especially when there are a lot of pronouns and the reader doesn't know who is doing or saying what.

4.) Comma-ing Action Beats - This error is very easy to fix, but a tough habit to break. I know I did this one a lot when I was younger. An action beat is an action placed next to dialog to define the speaker and to show emotion. When you connect the dialog and the action beat with a comma that's incorrect. You can't "throw the ball" your words. Let me show you.

5.) Action & Reaction -  This is a writing technique error. Action and reaction means when you sense something then you react to it. You can't react to something then see it/hear it/sense it and neither can your characters. It's out of order. These are a little harder to root out, but you'll get the hang of it. :)

6.) Massive Paragraphs -  I used to do this so bad. I'd have massive paragraphs ten lines long. I know we've seen it done in old books or we just do it because ... well we don't really know why it just kind of happened ...

But for modern day writing it's a lot better on the eyes if you trim these big babies down especially when there's a lot of them in one place. I like keeping mine to an average of four or five lines. I've seen some people go a little bit longer. But if you make one that's half of the page use your enter key a lot.

7.) Caps -  Using caps in blog posts and chatting and texting is fine, but using them in writing looks amateur. I've seen them used on rare occasions, but using them too much makes you look less professional and sometimes it just gets annoying. :P Italics can easily be used to replace caps if you want to emphasize a word (but don't go crazy with them like I'll discuss in the next tip), but using them for yelling is unnecessary.

8.) Overuse of Italics -
Italics are used for letters or writing like that in books and also for emphasizing a word, but if you emphasize every other word italics lose their power.

9.) Which & That - These words have their use as with any word, but a lot of times they're not needed and just bog down sentences. They often lead to long sentences that'd be better off chopped in half or thirds even. Do a word search for these as with some of the previous words I'm mentioned to see how often you use them. You can be amazed how many will show up.


11.) Was, Were, and Went - These are weak and vague verbs. If you can avoid using them do so. Omitting them as much as possible also allows for stronger verbs. These words are sometimes the only words that can do the job, but if another one can do it better, type in that one. Sometimes you'll have to consult a thesaurus, but it'll make your writing much more powerful.

12.) Passive Writing -  This is another place where "Was" likes to crash the paragraph party. Passive writing slows down the pacing. of your story and gets tedious.

Do you catch yourself doing any of these? Do you have any questions about them? What are some other common writing errors you've noticed?