How Can Characters be Powerful If They're Not Real? 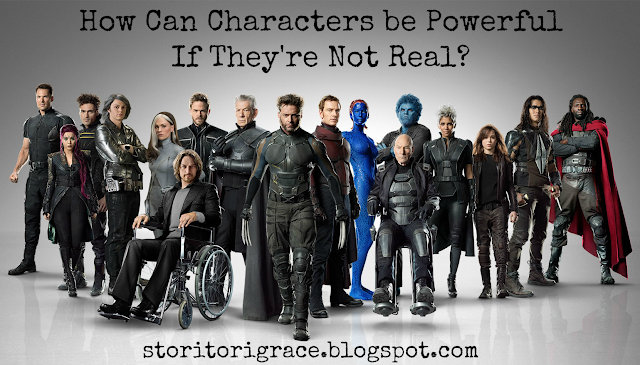 "You know they're not real, right?" "Why do you care about them so much? They're fake." "Historical people are better. They're actually real. I only read real stuff." "Loving fictional characters like they're people? That's stupid." That look like you're a crazy person when you squee over fictional characters.


Every geek has experienced a phrase like this or something along the lines. I was spurred to write this post because of the comments section on this image in a Facebook group: 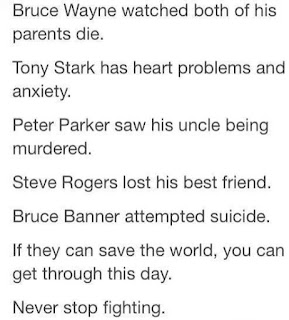 A bunch of people loved this post (me included) then one person felt the need to say, "You know they're not real, right?" This phrase and those like I've listed above bother me. Characters have changed my life in so many ways, whether in books or TV shows. As a geek, characters are just part of who I am. They've inspired me. They've urged me to be kind, selfless, brave, intelligent, and honest. I would be a different person if I didn't have them in my life. It's one reason I write, so I can create characters to inspire.

Therefore, today I'd like to talk about how characters can be powerful even if they don't exist in the physical world. Maybe you feel the same way. Maybe I can convince you to change your opinion if you believe fictional characters are pointless. Either way this is a matter I'm very passionate about.

1.) Writers Draw From Others for Characters - Authors are inspired by reality. Though dragons and magic may not exist, characters are often inspired by people the author has had experience with. Suzanne Collins drew much experience for the Hunger Games from her grandfather's PTSD from fighting in the Vietnam War. PTSD is a real issue. Though Katniss may not be a real person, she deals with something real that thousands deal with in real life.

I know I've taken events from people I know to put it books. I see what's around me and want to portray it in a realistic way for others to understand. I may not know what it's like to lose a parent, but I know people who have and I've used from what I've observed with them for my stories, because I know others can relate to that. That pain. That sort of loss. That's real.

2.) Writers Draw From Themselves for Characters - I believe a good writer puts a little piece of his or herself into their stories. When you read a really good book you can sense that essence in it. Often writers put many of their aspects, struggles, and experiences into their stories. J.R.R. Tolkien fought in World War I. He lost many of his war buddies during that dark time in his life. One of the biggest themes of the Lord of the Rings is death. Many comrades die in the struggle against darkness. Though the men in Middle Earth weren't real, those men in Europe were, and Tolkien keeps them preserved in his stories.

I'm adopted. I've often have characters who are adopted or who didn't know their parents, because for the longest time I didn't know my birth dad. This is a close matter to me and I write it from experience in my stories. Maybe those adopted characters aren't real, but I am, and I put that in my stories.

3 .) In Fictional Stories You Can Get to Know Characters More Intimately Than You Can Most People - It is not often when you come to know someone so well you know everything about them. We maybe come to know a handful of people like that in our life time. In fiction, we can come to know hundreds of characters like they are our best friends, depending on how many shows, books, and movies we watch. We come to know someone in ways, we never thought we could. We see parts of this person we often don't see in real life. We get to know characters like Katniss (The Hunger Games), Tris (Divergent), Thomas (The Maze Runner), and Celaena (Throne of Glass) in an intimate way.

In turn, we often become more empathetic toward people like the ones we read and watch, because we've seen their struggles. We've seen the days when they're vulnerable, happy, or angry. We see the parts of them that we like to hide. It creates a unique bond that can only be gained by honesty and clarity. A bond that's, though hard to attain, possible in real life with a bosom friend. 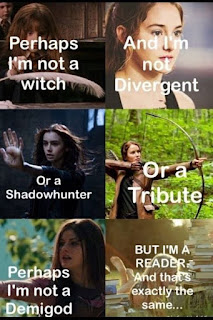 4.) Maybe the Character Isn't Real but Their Struggles Are - Depression. Anxiety. Cancer. Loss. Guilt. Poverty. Stress. A tough job. A seemingly impossible dream. These are all struggles that we deal with in reality and are often portrayed in fiction. We watch characters go through tough times, and sometimes we've gone through similar things as well. When we see a character conquering something we are struggling with, we can be inspired to conquer it ourselves.

When I listen to Sam's speech in the Two Towers, I cry and I've often repeated this both to myself and others in dark times. It has kept me going. When I watch Katniss stand up to the Capitol, it inspires me to be brave. When I read Rob still trusting God even through immense suffering in Failstate: Nemesis, I was inspired to strengthen my faith in God's plan. When I watched Magneto conquer his powers only fueled by rage in X-Men: First Class, I was inspired to let go of held up bitterness inside me.

5.) The Character's Virtues Are Real - Faith. Friendship. Love. Bravery. Sacrifice. Self-Control. Kindness. Forgiveness. Compassion. These are very real virtues portrayed by the best of characters in fiction. Showing these virtues is often difficult given many of the circumstances, but if we are to live lives in Christ's image, they are essential. So many stories show these virtues in a bright light. Author Bryan Davis once told me the two most powerful scenes often come from forgiveness and sacrifice, which I personally believe is because they both show true humility and rejection of self for another.

When Sam picks up Frodo and carries him to Mount Doom, it shows a friendship I think we should all aspire to. When Iroh forgives Zuko for rejecting him, it's a scene that brings me to tears every time. (In fact, I'm tearing up a bit writing this post.) When Katniss is heartbroken by wounded District 8 citizens in the Mockingjay, she shows a compassion we should have for others. When Steve Rogers drives the bombed plane into the ice in Captain America: The First Avenger, he gives up everything and shows us the meaning of sacrifice.

Conclusion - Though I can't physically go trekking through Middle Earth with Frodo nor go hunting with Katniss or attend a party in Asgard with Thor, what these characters stand for, their struggles, their virtues, their sacrifices, their inspiration, are very real.

How have characters inspired you? Who are your favorite characters? How have you seen God through stories?