Hey, all! Today on the blog I'm hosting a blog tour stop for young author, S.J. Aisling for her debut fantasy novel, Becoming the Chateran, coming out December 2013 by Life Sentence/Aniko Press. ^ ^ It is the first book of The Chateran series and a good fit for young adult readers. :)

There a bunch of goodies in this post including an interview with her, an excerpt of the book, a giveaway and a unique image from her the book. The book has over forty visuals and illustrations that she drew herself and she even designed the cover. ^ ^ 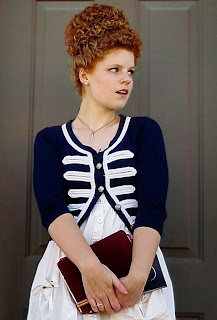 Stacia Joy has always loved to tell stories and invent fictional lands and characters. But she never considered becoming a writer herself until age thirteen, when, inspired by a pretend play she invented with a friend, she wrote the first draft of Becoming the Chateran. The story has since expanded into what will become The Chateran Series. Stacia Joy also writes in several other genres, including steampunk and paranormal/science fiction, and occasionally writes poems about buffalo.

Wanting to be able to show others what her imagined universe looks like, Stacia Joy taught herself to draw by studying the work of illustrators like Alphonse Mucha, Arthur Rackham, Kate Seredy, and Jan Brett. She also received training in illustration and graphic design at Madison Area Technical College, and plans to become a full-fledged freelance illustrator before long.

When not immersed in writing or art, Stacia Joy spends her time playing the piano and folk harp, composing music, Irish dancing, singing at the top of her lungs, and learning new things. She also enjoys helping with children's ministry at her church, and currently resides in the Madison, Wisconsin area with a kitten named Lord Peter Whimsey.

And here is a back cover copy of the book:

When Princess Rhea’s actions inadvertently condemn two innocent knights to death, she wakes to the hard reality that not even nobility is above the law. All her attempts to remedy the situation only complicate it, however, until she finds herself a fugitive in her own kingdom, having dragged her best friend into the trouble, as well. Their only hope for pardon? To accompany Sir Paladin and Sir Zephen in their sentence:

Slay, or be slain by, two legendary Dragons.

Travelling incognito, they meet with more malicious Phoenixes than could be coincidental, discover the mysterious disappearance of numerous citizens, and come face to face with a reawakened evil power. With the kingdom oblivious to the connection of these dangers, it’s up to Rhea and her outlaw companions to stop the rising threat and redeem their names – if they can survive their quest.

As the rest of The Chateran Series progresses, the affect of Rhea’s actions and the battle with the Dragons of Sama-Ael-Fen reaches beyond Gemworthy’s borders. The Dragons’ mistress seeks revenge for the damage done to her plans of conquest. Amidst the chaos, Rhea and her companions join forces with a motley troop of other brave men and women, all united by their call to protect their countries and their loved ones. They must learn to overcome their differences, pasts, and fears, and take up the quest of the Scintillatearian Swords to answer the challenge of evil as the Order of the Chateran.
An encouraging tale of friendship, true nobility, and coming of age that young adult readers can relate to, Becoming the Chateran also features over forty illustrations created by the author. 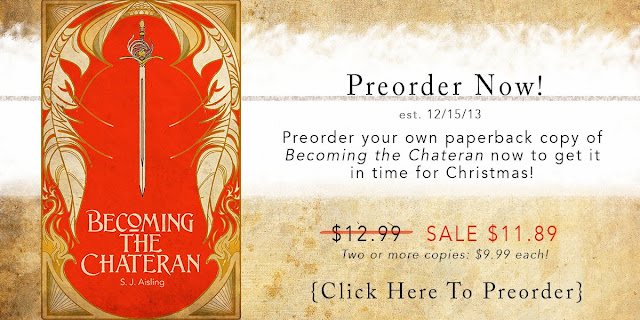 Now to the interview:

When will Becoming the Chateran be available for purchase, and where can I get it?

Stacia: Becoming the Chateran will be available this December as an ebook and a paperback, and you can buy it via Amazon, Barnes & Noble, and the website of my publisher, Life Sentence/Aniko Press. In fact, you can preorder your own paperback copy now from the latter location - preordering it will up your chances of getting it in time for Christmas!

Where did you find inspiration to write Becoming the Chateran?

Stacia: Years ago while studying medieval history in school, a friend of mine and I pretended we were knightesses (prince/princess, knight/knightess, right?). I was Rhea, and my friend was Hiylienea. We had so much fun with our fantastical adventures that I decided to write everything down so we could remember it all, and so doing created the first draft of Becoming the Chateran. The story has expanded and matured a lot since then, but all the major elements and characters of the original make-believe are still there.

Any hints as to what awaits in the rest of The Chateran Series?

Stacia: Most of the characters from Becoming the Chateran will reappear throughout the rest of the series, as well as many new ones. I'm personally really excited for this second book of the series to come out, as it will tie up a several loose ends/foreshadowed events from Becoming the Chateran… as well as introducing new conundrums to tease you with. This second book features a shy minstrel girl, an awkward archer, a talking White Stag, revengeful Sídhe, enchained jewelry, and a civil war.

The Chateran Series is medieval fantasy. Have you been doing much research for writing it?

Stacia: For the past seven years and counting I have lived half in this world, and half in that of this series. I've been walking around with a notebook all but attached to me, stuffed with notes about food, geography, clothing, character sketches, scene descriptions, and snatches of poetry and ballads.

Tailoring myself costumes based off those my characters wear was one of the most amusing and insightful things I did, as I'd dress up in full rig to act scenes out in my back yard or parks before I wrote them, to make the action and descriptions as accurate as possible. I also tried my hand at archery and horseback riding, proudly became the owner of several encyclopedias on world costume and armor, and studied heraldry and the cultures of multiple medieval cultures. My father is a research scientist. I think it rubbed off on me.

Do you have any tips for fellow writers on staying focused on a story?

Stacia: To me, staying driven to write a book depends on finding the happy medium between planning out what will happen and what the characters are like so you start out with good solid ground under you, and leaving enough out so that even you, the writer, is chaffing at the bit to find out what happens next.

Also, I feel too many writers start out by trying to write what they don't know about, and their lack of knowledge and interest is crippling. But do more than simply write what you know. Write what you are passionate about – readers are smart people, and they'll notice the conviction ringing through your story, and it will touch them as only fervent honesty can. And as a side perk, you're more likely to actually WANT to write, as it will be something you feel/believe strongly about. This automatically makes the whole process a lot easier.

What got you started writing?

Stacia: I've always enjoyed storytelling, so I think it was just a matter of time before I discovered writing. I didn't seriously start writing down the stories I made up until after I'd recorded the imaginary adventures that inspired Becoming the Chateran, and found out how fun it was, though.

When did you start drawing?

Stacia: I started drawing the same time I started writing, and for the same reason - to get down on paper the characters I'd made up for what turned into Becoming the Chateran. I've pretty much taught myself how to draw over the past seven years, by studying art, collecting picture books by my favorite illustrators, going to museums, and practicing every spare moment. It's very rare for me to go anywhere without my sketchbook.

Do you have any advice for young writers pursuing publication?

Stacia: Don't write what's popular now just to try and get published. For one thing, by the time you finish your book and have it publication-ready, the trends will have moved on to something else - be that something else, come up with a new idea or a fresh take on a classic theme! Also, writing to be cool is just like acting a specific way to be cool. Chances are, it isn't really you. When you write the story that only you can write, using your own life experiences and knowledge as tools, you are writing the best you possibly could, because you are the expert.

Another thing: Getting a foot into the publication business is as much who you know as what you know. Join writers' groups, find an editor or beta readers, or contact your favorite authors to see if they'd be willing to share some tips. (I personally love to help others in their writing endeavors, and I've found many, if not most, writing and illustration professionals to be the same.)

The more people involved with writing you know, the more likely you are to get connected with those who can get you going on the path to publication. I'm a member of the groups Go Teen Writers (GTW) and it's unofficial alumni group Young Adult Writers Alumni (YAWA), both of which have wonderful, active group pages on Facebook, and I've found them to be very helpful both in general support during writing and in getting me connections.

And lastly, here is the original image and excerpt below! 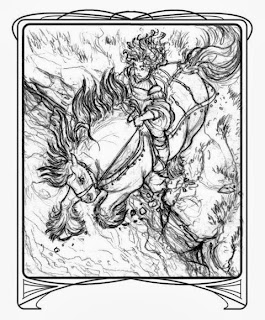 With shrill yells, several of the Royal Centrinels swung into the saddles of their own mounts and spurred in pursuit. Rhea turned about and crouched over Britnya’s neck, “Fly, beautiful!”

Several hundred yards down the wash, the fleeing three turned, and the horses plunged up through a narrow deer track onto the raised bank. The woods surrounded them, and Rhea clung to Britnya’s mane as they dodged low branches and cleared fallen logs and more small gullies. After one particularly close jump, she glanced under her arm to see one of the pursuing five centrinels fall short. His horse’s hind legs buckled beneath it and slid the both of them into the ditch. When Rhea faced forward again, she noticed flickering glimpses of light through the close-set cedars ahead, remembered Paladin’s mentioning a Griffin being among the centrinels, and assumed with dread that a clearing was coming up.

It’ll pluck us out of the saddle like so many conies off a mountainside!

She opened her mouth to shout to the others, but it was too late. Britnya burst into the light.

And last lastly the giveaway! :) 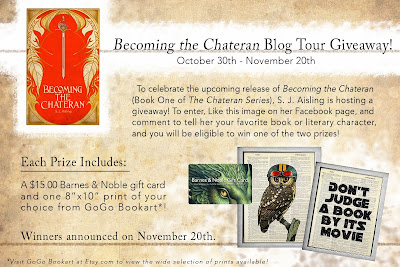 I'm excited about this book! Show S.J. some love and give her some likes and follows and purchase the book! I definitely am! :) Thanks, S.J. for letting me host you here! :)