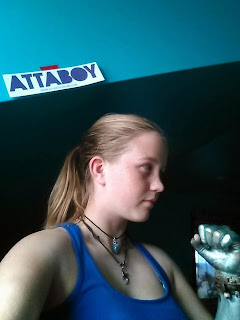 This month I'm participating in young author Gillian Bronte Adam's Of Battles, Swords and Dragons of Adamant's Characters in Costume Challenge! December's Challenge is Sidekicks! My bestie, Cassidy, has let me use her Halloween Pro costume pics for it because she's awesome. ^ ^

Pro Jamerson is from my YA futuristic science-fiction series, Subsapien. She grew up in a bad part of the capital city in the Prime Dome and works for the world's leading scientific company to support her family. She is a biomechanical subsapien meaning she's half human and half robot--sort of like a cyborg--hence the metal arm. Biomech for short.

For a few years now her biomech parts have made her smart, fast, and strong. Her arm can shoot out her fist attached to a long cable like a harpoon gun. She uses her ability to punch enemies from afar or as a grappling hook. Magnetism in her hand allows her to have a firm grip on metal for grappling. 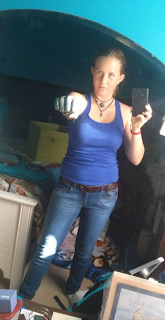 She loves to wear jeans or basketball shorts since she is a tomboy. Her hair is nearly always in a ponytail. Though she wears t-shirts, she likes showing off her tightened muscles in a tank top. She also enjoys sneakers and multiple necklaces and bracelets as her personal fashion statement and her glimmer of girlishness.

She's spunky and a wizard at martial arts. Laced with a Southern accent she has a quick wit, and she's a frequent user of sarcasm. She shows my main characters Bryce and Caleb the ropes in their new home at Rota's Laboratory of Technological Research or L.T.R. Though she likes to pick on her boys a lot, she is a faithful friend and definitely a wanted ally in a fight.

If you'd like to learn more about her, check out her book description in Current Projects, her profile in Characters or some of my drawings of her in the Art Gallery. ^ ^

Thanks for letting me participate, Gillian! :)

Have you done Characters in Costume before? Have you ever dressed up as a character of yours before? Has anyone else?