How to Write A Good Character Interview 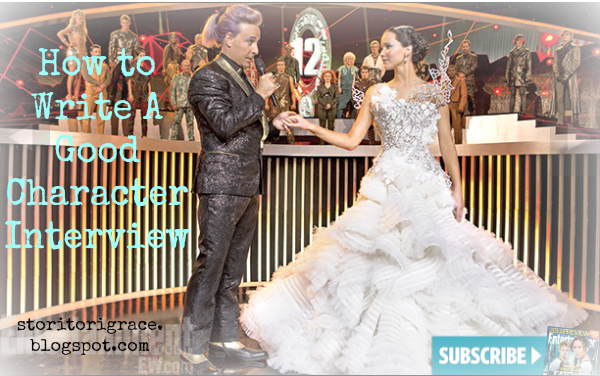 Hey, guys! Today I'm talking about how to write character interviews and the benefits of them. :) Whether you have a blog of your own or if you just want to do them privately, character interviews are a great writing tool. Though this is mostly geared for blog post ready interviews the basic principle can apply to a private one too.


So what's a character interview?

I like to think of my interviews like cast interviews of movie actors on talk shows and such. Sort of like Katniss and Peeta with Caesar Flickerman. ;) In the interview you want your readers to get a basic idea of your character without giving away any big spoilers in the story. Their personality and such. The better you know your character the easier they are to write especially if he/she is one of your main characters, but this also assists with side characters that don’t have point of view roles in your novel. There are several ways to acquire questions. 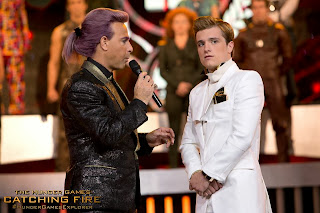 1.) Yourself – You can either think up questions or use some of the loads of character development charts you can find on the internet.

2.)  Friend – Getting a friend to ask the questions in better than yourself usually because they usually think of questions you wouldn’t. That makes you think a little bit more and tap into parts of your character that your own questions wouldn’t.

3.) Multiple People – Asking multiple people is the best because you get a wide variety of questions. Ask your group of writing buddies, friends and family or do what I do—post a character interview prompt on your blog.

Character interviews help your blog because your readers get to have a taste of your characters, and you get good amount of reader interaction. I’ve been doing character interviews for a while now, and I’ve always gotten great response and lots of views especially with my enhanced method.

These are the steps I take:

1.) Bio – I prepare a bio of the character. I keep it to only two paragraphs in length. I include six things in it: the character’s age and position in the book (main character, side character, villain, ect.), his/her’s goal, he/she’s personality, he/she’s setting and a few unusual facts about him/her. This way the readers get a good idea of who they are. Most of the time I include a picture of a celebrity look alike or a photo I found on Pinterest to go along with it so the readers know how I imagine they look like.

Mor is a seventeen-year old aspiring red hood or werewolf huntress.  She lives at the red hood manor positioned near silver mines on the west side of the Queendom of Silfurlund. Half-mechanical werewolves have plagued her country for three hundred years and only women with the hereditary Spirit of Silver can keep these enemies at bay. When she was very young, her father went missing in the war which has given her extra drive toward the defeat of the beasts. Both Mor's mother and granny have been legendary huntresses, saving hundreds of lives and becoming great legends. It is Mor's dream to continue this legacy.

As is tradition, she owns a wolfhound to assist her in her missions to protect the nearby villagers. He is her constant companion and named Sielgair. Claes and Dina, a silver miner's son and a fellow red hood to-be, are her two best friends and perfect opposites to her plucky personality. Though at times Mor can be hot-headed, her bravery and tactical abilities are unquestioned by her fellow red hoods in training. Her skills with double silver axes and black powder pistols have put her at the top of her class. At eighteen Mor will be able to graduate and become a full-fledged Red Hood. That day couldn't come soon enough.

3. Format the Post – I like to collect the questions as they come and then format the post the day before posting. This way I have all the questions together and can arrange them in a good order. If I get doubles of a question I just pick the first person’s question or if that’s another person’s only question, I pick that one. I like to format the post in a clear way with lots of white space. Another thing that’s fun to do is to have me and the character do actions within the interview like smiling, shifting, etcetera to make it feel more real. I put all actions between asterisks.

Here’s an excerpt from the interview with my fantasy character Mor for an example of formatting:

Mor:
I like roast goose and mince pies, but I can't get enough of tarts. Black currant, raspberry ... Any tart I will eat it.

Me:
I like them too. And Jedi Kyra's last question: And one more; what are you most looking forward to about becoming a Red Hood?

Mor:
It's a tie between the travel and no more lessons to be frank. *laughs a little*

For the full interview you can check it out here.

Be sure to answer all of the readers’ questions – Unless it’s a big spoiler answer all their questions. The reader took the time to comment so make sure to include them.

Thank the Commenters – Thank the people who left the questions within the post. They took the time think up questions for you. Acknowledge their effort.

Character interviews are also engaging for the readers if you ask them to ask the characters questions. You can do follow-up interviews later and include those questions and some of them can make you think out of the box.

You can also interview someone else's characters for your blog. It's fun being on the other side and plus you can help a friend out. :) If you don't have a blog, then you can do this on your own and still benefit. The point is to help you get to know your characters.

If you really like acting as your character, there's this thing called Character Chatting. It has immensely helped me with getting deep into my characters.

And there you have it! That’s how to do a character interview. I hope it helps your writing. ^ ^


Update: I've improved my method of character interviewing. There are a few updates to this post and I've combined some content from the guest post I wrote on Meek Geek.