A Book Review of Glass Sword by Victoria Aveyard

Mare Barrow's blood is red—the color of common folk—but her Silver ability, the power to control lightning, has turned her into a weapon that the royal court tries to control. The crown calls her an impossibility, a fake, but as she makes her escape from Maven, the prince—the friend—who betrayed her, Mare uncovers something startling: she is not the only one of her kind.

Pursued by Maven, now a vindictive king, Mare sets out to find and recruit other Red-and-Silver fighters to join in the struggle against her oppressors. But Mare finds herself on a deadly path, at risk of becoming exactly the kind of monster she is trying to defeat. Will she shatter under the weight of the lives that are the cost of rebellion? Or have treachery and betrayal hardened her forever?

After reading and enjoying the first book, I knew I just had to get a hold of the sequel!


The Plot: The storyline reminded me a lot of X-Men: First Class. Mare and her comrades are scouring the globe for more newbloods. I feel like she and Cal are like Charles and Eric. However, unlike X-Men: First Class, there's a villain coming behind her and trying to kill them before she can get to them. This adds a lot of tension, especially when Mare is becoming afraid that she's creating an army just like the one she wants to defeat. 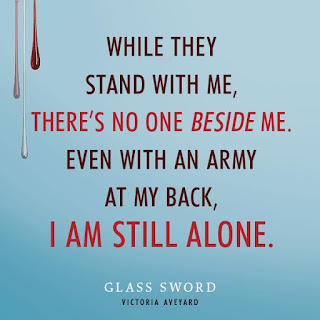 The Characters: Mare definitely has her share of development. She's still recovering from Maven's horrible betrayal and this haunts her nearly every waking moment, especially when Maven keeps trying to creep into her life and foil all of her good efforts. I'm really enjoying her as a character.

I also really like all of the newblood characters coming in, though my least favorite has to be Cameron. I'm just not a fan of obnoxious teenagers.

Maven is just evil. Later, it's explained why, but he's just a sick person.

The Setting: I really like seeing more of this storyworld and because of the plot, the characters travel to many different regions and we see more of this creative universe.

Epic Things: So many superpowers! I love how the newblood powers are basically enhanced versions of silverblood powers. Nix has an ability like stoneskin but his skin doesn't need to look like stone. It's very cool and creative. 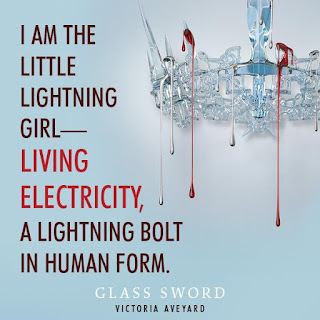 The Theme: Mare is beginning to realize she's more than just a thief in the Stilts. She's always thought very lowly of herself, like she's the bottom of the barrel, but now she's growing to love herself and that's an important thing.

Content Cautions: The content definitely jumps in this book. Some of the imagery was a bit disturbing in areas. There is a dead and decayed infant, a horribly mangled lightning-scorched body, and a severed head. Some blood and torture. There's an instance of premarital sex. D*** is used six times, bi***h three times, ba****d three times, h*** twice, and a *** three times.

What We Can Take Away For Our Writing:
1.) A Villain from a Distance -  Maven doesn't have much of a physical presence in this book, but there is always a reminder that he's around and he is a problem. This is seen in evidence of the villain's work and notes that he's left.

How this can be applied to writing: Do you have a villain who's at a distance in your story? 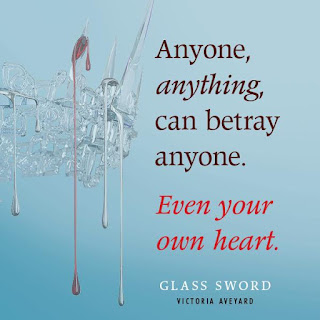 Conclusion: Though I didn't love this book as much as the first one, this book landed on a cliffhanger so I had to read the next one!

About the Author:
I'm a screenwriter/YA author who likes books and lists. This site is the nexus of my universe.
My book RED QUEEN will be published Winter 2015 from HarperTeen at HarperCollins. I'm repped by the incomparable Suzie Townsend at New Leaf Literary & Media, Inc.
The genres I'm into include YA, Fantasy, Historical, Adventure, Apocalyptic - if people are dying, I'm buying.
Blog//Twitter//Goodreads

Other Books I've reviewed by this author:
Red Queen
Posted by Victoria Grace Howell at 1:00:00 PM