How to Be a Proper Brainstorm Buddy 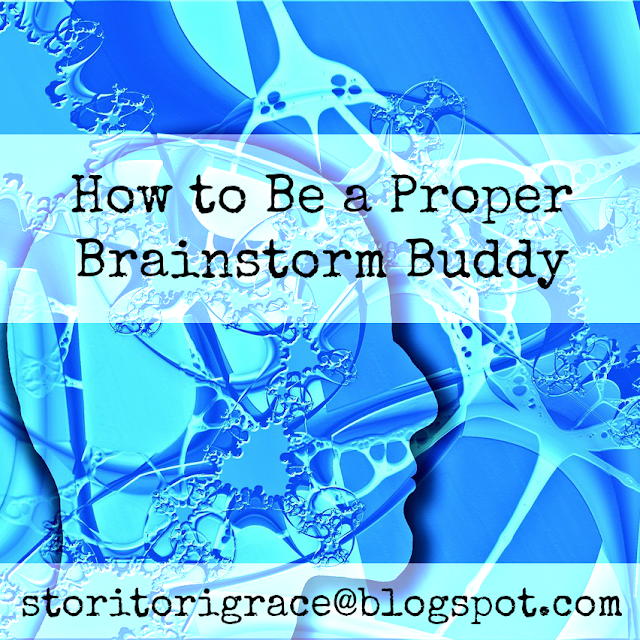 Hello. So you are someone who has been bestowed upon the esteemed position of being the all-hallowed brainstorm buddy. This means you have the privilege of getting insight on a writer's books that no one else can have. You will be a part of the creation of their magnum opus. When one is chosen for this elite status a writer is saying:

Therefore here is a brief guide on how to be a proper brainstorm buddy so you and your writer may get maximum production out of your partnership. I may have gotten a little gif-happy with this post, but hopefully these visual aids will be of assistance.

1.) Accept the Fact That They are Going to Talk to You About A Lot of Weird Stuff - Writers a weird. It's the truth, so accept they are going to talk to you about weird things like gunshot wounds, what the toilets are like in Russia, and, "Should I make this race's skin purple or vermilion?" Also just because they talk about building bombs and where to bury bodies this does not mean they are terrorists or psychopaths. This is perfectly normal writer behavior, and remember it's all for the books.


2.) Accept the Fact and Be Willing to Possibly to Do Weird Stuff For/To Them - Your writer may ask you to do strange things in the name of book research such as duct tape their hands (I've done it), ask you to get into a certain sitting position so they can describe it (I've done it.), or try weird foods at certain restaurants so they can describe exact tastes. Writers want to make their books as realistic as possible (Yes, even speculative fiction has to be realistic to a degree) and we'll do a lot to make sure we can get that realism.


3.) Accept the Fact They May Ask You About Said Things At Weird Times of the Day or Night - The muse will hit the writer at any time of the day or night, so you may get a text a two a.m. when the writer is trying to fan a flame of an idea that just hit them in a dream or they may call you up randomly to talk about another idea. Some writers get their ideas in the shower or while washing dishes, some have their juices flow in the day or night. It varies, but it's common behavior.
4.) Know that They Are Sharing Something with You that is Dear to Them - Keep in mind all the book ideas the writer shows you is toward a project that reflects their soul. They take part of their lives and put it into a story that they spend hours and hours working on. They're very passionate about their stories and sometimes sensitive. Now they're sharing it with you, because they trust you enough to know parts of their inner self.

5.) It's Okay If You Get A Little Confused - Writers will sometimes just spout ideas and you'll think, "Wait what book is this? What's going on?" As a brainstorm buddy you're also their anchor, so if they're getting carried away tell them politely to slow down. Another good practice for if this is your first time being their brainstorm buddy or if this is a new book is to ask them to tell you about their book's premise. It's good practice for them even if they do groan a little bit. If they want to be published, they have to get in the habit of telling people about their book at the drop of a hat.

6.) Ask Them A lot of Questions - When a writer comes to you with another idea, ask them about the idea like, "So what are her parents like?" or "Where does he work?" or "So is the environment snowy or a warmer climate?" Questions really help get the juices flowing especially when they're coming up with a new concept or if they're really stuck. Just ask them any question that comes to mind

7.) And Sometimes Just Shut Up and Let them Talk - In other cases you just have to be quiet and listen and just let them talk out their idea or problem. They just need a living human being that's not their cat to voice their idea to.

8.) Be Their Voice of Reason - If an idea totally doesn't make sense say so nicely. Don't totally shut down their idea or you'll get a depressed writer on your hands. Trust me, you don't want that. But kindly point out those flaws and plot holes you see in it so they don't write a whole book with that huge massive problem and then they have to spend another rewrite fixing it. You are saving them from hours of extra work.
9.) But Also Be Their Fangirl/Fanboy - If there's something about their stories that you just absolutely love don't be quiet about it! If there's an adorable couple, squee about it. If there's a super cool power, oooo and ahhhh about it. If there's a scene that just hits you in the feels, tell them how much it does. Writers love to know that they're doing their job right. It also encourages them if they're feeling like their story is stupid or somebody says something mean about it or they just got rejected.

10.) Know That They May Not Say it Enough But They Really Do Appreciate You - Writers may ask you about weird things or ask you to do other weird things or ramble on for hours about an idea, but they do love you and appreciate you. They think you're amazing and have a special connection with you and they will probably put you in the acknowledgments of their books when they get published or even dedicate it to you and/or give you a free copy!