Writing Lessons from Movies: the Lord of the Rings 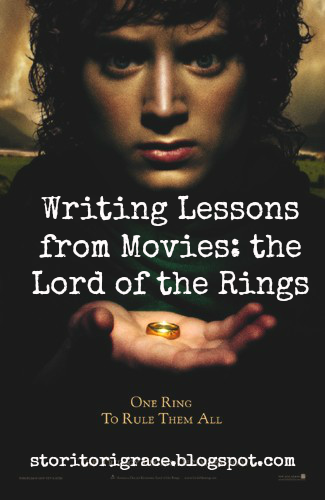 Tolkien's works have been close to my heart since childhood. They're one of the reason I've become a writer and one of the reasons I'm the woman I am today. I'd give a synopsis for this trilogy but every self-respecting geek knows about LOTR. If you need one, just Google it or ask me in the comments. Middle Earth and its characters have inspired me deeply and there is much to glean about writing from this magnum opus of Mr. Tolkien's. As always this writing lessons post shall be filled with gifs!

1.) Cultures With Races -  One of the biggest standouts of Middle Earth is the vast varieties of races: Men, Elves, Dwarves, Hobbits, Orcs, Uruk-hai, Ents, and wizards, to name the basics. One thing Tolkien and Peter Jackson (Director of the Lord of the Rings) took into account was that there are cultures within each race. Humans aren't all the same in culture neither should any other race be.

Rivendell elves live in an environment with a lot of water, their hair is commonly brown, they're generally hospitable, and they speak Common Eldarin elvish. On the other hand Lothlorien elves live in giant trees, commonly have blonde or white hair, are inhospitable, and speak Quenya elvish or High elvish. Mirkwood elves live in a dark forest, their hair is either blonde or red, their speak both languages, and can almost be considered an evil kingdom of elves with Thranduil as their ruler. They are the same race yet their cultures are vastly different in environment, looks, and attitude.

How this can be applied to writing: When creating a world in your story, think of how cultures within races can vary, not just by look and where they live but how they act and how their language varies as well. Doing this adds more realism to your story and can create some interesting conflicts and elements for your plot.


2.) Languages - If anyone knows anything about Tolkien and his works, they know about the multiple languages he created. Elvish, Black Speech, Dwarvish, and Ancient Rohan are but a few. He took care to make each one appropriate for each race. Elvish is smooth, Dwarvish is rough, Black Speech is dark and evil sounding, and Ancient Rohan has Celtic bases, though Elvish is also taken partially from Finnish. Each language reflects the character of each race. He even made written languages for them as well!

How this can be applied to writing: Though no one expects you to come up with multiple languages for your books, it's a good thing to keep in mind the languages of your storyworld especially when naming characters. David would be an odd name for alien who comes from the planet Venus where they speak Venusian. You may even want to make up a few words or use a base language for your world to give it a different feel. Play around with it.


3.) Each Point of View Had a Part to Play in the Grand Scheme - The Lord of the Rings has many storylines, beginning with only a few in the Fellowship of the Ring and branching to many in Two Towers (my favorite) and the Return of the King. Each point of view eventually weaves into the main plot which is to destroy the One Ring. The main point of view is of course Frodo, but there is also Sam, Saruman, Gandalf, Merry & Pippin, Aragorn, Arwen, Elrond, and Faramir. This is quite a large cast and having so many POVs can be disastrous, but they were pulled off quite well as they all tied together in the end.

How this can be applied to writing: Often in stories we can see point of views put in solely to have an interesting subplot, but it has nothing to do with the main point of the story. Though this can be interesting, it can often divert too much from the plot or be too confusing for the reader. Keep this in mind when using many point of views. They can be a great tool, but a tricky one to handle.


4.) Internal Struggles - The Ring brings out the worst in anyone who wields it and often anyone who is around it. This presented so many internal struggles: Boromir's desperation to protect his country, Faramir's desire to win his father's favor, Galadriel's lust for power ... Everyone has darkness inside them and it's up to the characters to choose to let it take hold. Even without the Ring there is Gandalf's dread that he's killed Frodo by sending him to find the Ring or Frodo's fear that he can't complete the quest.

How this can be applied to writing: You don't need a ring to bring out the inner struggles of your character. What do they battle with? Doubt? Fear? Cowardice? Greed? Hate? What are the dark parts in your characters' hearts? Will they let it consume them or will they conquer it? This is what makes character arcs which are how your character will change during their journey.


5.) Great Death Scenes - I don't know about you guys but I cry nearly every time at the big death scenes in the Lord of the Rings films (Hush, people who are against Haldir's death). Even some of the minor deaths like Theodred and some of the peasant soldiers in Helm's Deep can make my eyes glass up. Every good character's death is done in such a way that you really empathize with the characters. Sometimes you even go into the POV of the character before he dies. When Theodin is killed by the Witch King he watches as the dragon swipes its head to grab him and knows in that moment his time has come.

When a character dies, the living characters grieve. Even the men cry which is what I think brings out the waterworks the most for me. They weren't melodramatic, but they felt deep pain. The characters are often killed in places where there lives are about to get better. Theoden was repairing his relationship with his niece and nephew, and Boromir was trying to redeem himself after betraying Frodo. Sometimes we didn't feel the brunt of a death until we saw someone else mourning for the character like when Theoden began to mourn for his son with the heartstabbing line, "The young perish and the old linger ... No parent should have to bury their child." (My eyes just watered even thinking about that line.)

How this can be applied to writing: When you kill off a character, their death should hit the readers. They should feel the characters' grief. Maybe it won't be until they see the characters grieve that it hurts them. Kill characters in such a way that it impacts the readers. Perhaps like Theoden and Boromir have them at a point where they are about to be redeemed. Perhaps have a character die suddenly and you didn't expect it. There are many ways to make a character's death resonate.


I don't recommend killing sprees though or those can just get irritating and be very careful which character you kill or that can put off readers well. When considering a character death, put a lot of thought into it. Will it progress the story? If Boromir hadn't died then the necessary plot with Lord Denethor and Faramir wouldn't have happened.

6.) The Black Moment - The Black Moment is the part of your story where all hope seems lost, where everything is going wrong before the ending comes. The Lord of the Rings had some really great black moments that really made you doubt if the characters were ever going to succeed.

In the Two Towers during the Battle of Helm's Deep when the Uruk-hai were streaming into the fortress to wipe out Rohan, and Sam and Frodo were trapped in Osgiliath during the dragon raid, it seemed like nothing could be done to stop the enemy. In the Return of the King when the armies of men were fighting at the Black Gates and were sorely outnumbered and when Frodo refused to cast the Ring into the fire, it felt like everything would fail. All that the characters fought to achieve seemed lost. In the words of Sam, "How could the end be happy after so much bad happened?"

How this can be applied to writing: When you write your stories you want to make your readers believe the goal your character is trying to achieve is very difficult. It shouldn't be a cakewalk. At the Black Moment is where you make your readers doubt that achieving that goal is possible. Raise the stakes in any way you can to make this effect work.


7.) Skillfully Woven-In Themes - J.R.R. Tolkien was a Christian man and he wove many Christian themes into his stories. Some of the themes he chose for Lord of the Rings were death, perseverance, and brotherly devotion. He did this in such a way that they didn't seem preachy, but they were clearly there. In the end, the themes of the Lord of the Rings are what has captivated audiences to this epic fantasy series. Themes that touched their hearts and made this fantasy world real for them.

How this can be applied to writing: Every good story needs a theme. It is what makes a story last with the readers. When you put a theme into your story, you don't want to shove it down their throats nor make it so vague that nobody can pick up on it. This is probably one of the most difficult parts of writing, but it can be done and maybe that message will help someone who reads your work. 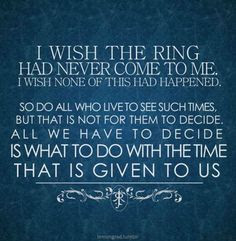 Yes, this post got long, but I'm covering a trilogy of movies with this one. I honestly almost cried a few times during writing this post because this series means so much to me. The Lord of the Rings are beautiful stories. Dare I say that anyone who finds them boring needs their head checked. (Diehard Tolkienite here. *coughs, coughs* I will defend this fandom to the bitter end above all others.) It has inspired thousands maybe even millions of people, including many writers. There is a reason why this film has become so timeless.