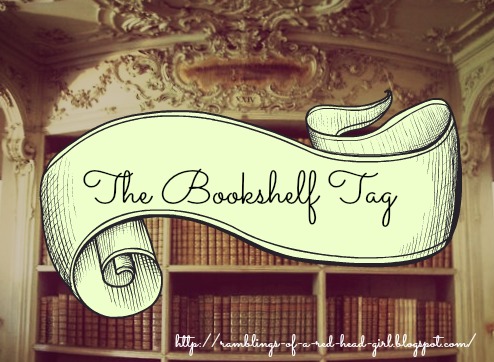 Though I didn't get tagged for this one Hayden over at Every Story Girl made this tag available to anyone so I'm doing it!

Some rules:
The book (s) you answer with must be from your bookshelf.
And include a picture of your bookshelf if you'd like to and if possible (if not, no big deal. Include pictures of your dream bookshelf, if you wish!)

1.) Describe your bookshelf (or wherever it is you keep your books-it doesn't actually have to be a shelf!)
My bookshelf is a motley conglomeration. It has a mix of fiction and non-fiction books plus I keep an assortment of trinkets from various things. It's a built-in shelf that faces my hallway so unfortunately that doesn't have the best lighting.

2.) What's the thickest (most amount of pages) book on your shelf?
My World Coin book. It's two almost three inches thick.

3.) What's the thinnest (least amount of pages) book on your shelf?
My Avatar: The Last Airbender comic books. They're maybe a centimeter or two.

4.) Is there a book you received as a birthday gift?
Oh yes, several. From my most recent birthday I received Failstate: Legends by John W. Otte and Omega Dragon by Bryan Davis.

5.) What's the smallest (height and width wise) book on your shelf?
A tiny, old Webster's dictionary that I read through as a child.

6.) What's the biggest (height and width wise) book on your shelf?
My Anatomy and Physiology book I still own from school because it's great for reference.

7.) Is there a book from a friend on your shelf?
Raising Dragons by Bryan Davis. It was birthday gift from a friend.

9.) The last book you read on your shelf?
The Judgment Stone by Robert Liparulo.

10.) Of all the books on your shelf, which was the first you read?
The Random House College Dictionary. I was huge nerd as a kid, okay?

11.) Do you have more than one copy of a book?
I did at one point, but not currently. I had two copies of Reapers by Bryan Davis on purpose, but I gave one away.

12.) Do you have the complete series of any book series?
Oh yes. Lots. The Dragons in Our Midst series and its sequel series, Chronicles of Narnia, The Safe Lands trilogy by Jill Williamson, most of the Avatar: The Last Airbender comics, the Hunger Games trilogy, Failstate series by John W. Otte, Blood of Kings by Jill Williamson, Tales of Starlight by Bryan Davis, Dragons of Starlight by Bryan Davis, and the Cantral Chronicles by Amanda L. Davis.

13.) What's the newest addition to your shelf?
A Time to Die by Nadine Brandes and Orphan's Song by Gillian Bronte Adams. I just got them at Realm Makers.

14.) What book has been on your shelf FOREVER?
The dictionaries.

15.) What's the most recently published book on your shelf?
Omega Dragon by Bryan Davis. It just came out in March.

17.) A book you won?
The 13th Tribe by Robert Liparulo I won at an online conference. I won Captives by Jill Williamson as well.

18.) A book you'd hate to let out of your sight (aka a book you never let someone borrow)?
The Emotion Thesaurus. I need it for my writing. It's very very very important. I even have an ebook copy just in case something should happen to it.

19.) Most beat up book?
The World Coin book. It got water on it, but I managed to save it narrowly with a hair dryer.

20.) Most pristine book?
A Time to Die by Nadine Brandes because I just got it.

21.) A book from your childhood?
The Usborne Illustrated Guide to the Greeks. Yes, I know. I'm an nerd! We established this!

22.) A book that's not actually your book?
My Warriors of the Indian Plains book is technically my parents', but I've kept it.

24.) A book that is your favorite color? But what if I don’t know what my favorite color is?
Throne of Glass by Sarah J. Maas. It's blue and purple and silver.

25.) Book that's been on your shelf the longest that you STILL haven't read?
Peril by Suzanne Hartmann. I've had the book for about five years now and still haven't read it. I won it in a drawing at a conference.

Phew! That was a long tag. I think I've officially established myself as a major nerd. XD

Now for tag victims (I'm keeping the list short this time because most of these tags have an insane number of people required to tag):

4.) Adrienne @ Roving Through the Glenn

Have you done the Bookshelf Tag before? If so, post a link in the comments? If not, what are some of your answers to these questions?

You may also like:
The Infinity Dream Award
The Real Neat Blog Award
30 Things You Might Not Have Known About Me
The 777 Writing Challenge
Favorite Screen Characters Tag!