Extending Your Novel: How to Make the Story Longer Without Just Adding Fluff 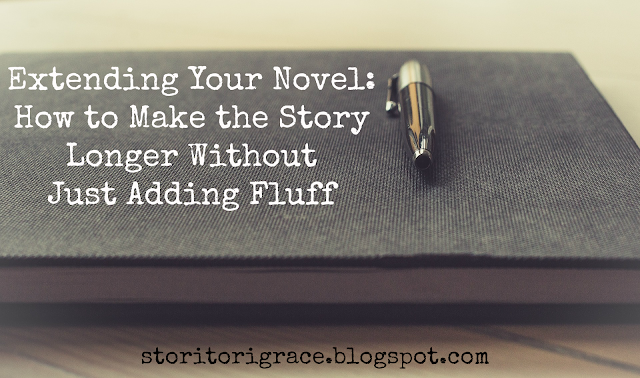 NaNo has just recently ended. You've written a 50K word novel. The thing is ... the normal novel length is around 70K. 50K is the bare minimum for a novel. What in the world are you going to do for that extra 20K that isn't going to be a lot of unnecessary fluff that's going to hurt the book? Maybe you're not doing NaNo, but you're just writing on your own and this problem happens or you wrote a short story and you'd like to make it into a full size novel. Whatever you issue is, I hope this post helps. Thank you Sara Letourneau for suggesting this post!

Recently (by the time this post was written anyway), I had to extend Red Hood by 20K, after shortening by 4K for one publisher then getting rejected then having another publisher want it longer. If it sounds frustrating, it kinda was. But ... this journey taught me a lot about cutting and a lot about extending, even though I wasted hours of my life and many tears cutting out that 4K.

1.) Description - One of the number one things that gets neglected, especially when you're speed writing is description. At least for me anyway. Oftentimes we lack description in the first draft. We just give a basic idea then move on when we need more to get a decent picture of the scene. Look for areas in your story lacking description. Sometimes this alone can extend your novel by 10K to 20K. If you need more tips on description I wrote a post about it.

2.) Can You Enhance an Existing Scene? - Are there any scenes you can extend? Think like in the Lord of the Rings where they added scenes that included more character development and backstory and such. I've seen both the theatrical version and the extended version and the extended version is so much better because you get the know the characters and understand the world more because of those new and extended scenes. You want to have this kind of mindset. Can you make a scene a tad longer to show more dynamics between two characters? Can you weave in some worldbuilding? Can you add more action?
3.) Look at Places You Sped Through - When I was reading over Red Hood to extend it, I looked at all of the spots in my books where I sped a few days. The book contains a lot of travel and I found many places where I could add in some scenes that added more conflict, more action, more character development, and more ... more. Writing out a timeline was extremely helpful for this so I didn't get the days mixed up.

4.) Subplots - When you're writing a short story, there often are no subplots. Sometimes when you're first drafting, you may not think of subplots. Sometimes when you have to write short, you have to cull or keep the subplots to a minimum, but when you're extending your book, you can add more. As I extended Red Hood, I added a subplot about Claes's downward character arc. My poor baby ... Why must you turn toward the dark side and why won't you tell me if you come back or not? *clears throat*

5.) Other POVs - Can you add another point of view? This is something to put a lot of thought into before doing, because it is a big undertaking and you don't want the new point of view to hinder the plot. I added Claes's point of view into Red Hood, because number one, I love Claes, and number two, he has his own little subplot that will transition into the next books of the series. I've often read books where I'm thinking, "Why do you even have that POV?" If the person is only going to have one scene in their point of view out of the entire book and it's really random and unnecessary, it's probably not a good idea to add it.


Conclusion - Extending your book can be a daunting task, but it's not impossible and it's worth it when you're done! You can do it!

Have you had to extend your novel? What are some tricks you used? Did you participate in NaNo?

You may also like:
Description: It's Gotta Be Just Right
Inciting Incidents 101
Writing Lessons from Anime: Interior Monologue and Thoughts
Six Tips For Line Editing
How Sentence & Paragraph Structure Can Boost Your Book