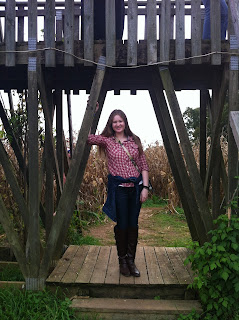 Since it is the last month of the year (Still in shock about that), I've decided to shake things up a bit for this month's character interview which isn't going to be with a character. It's going to be with me! I've seen some bloggers do these Q & A things and I thought I'd give it a shot. So you can ask me any question you want whether it be about my life, my writing, drawing, tips about writing, whatever.

If it's too much of an eyestrain to flick your eyes to the left to the short bio or if it's a danger to break your forefinger to click on the about me page, I'll go ahead and give another bio right here.

I'm Victoria Grace Howell and I live in the Atlanta, Georgia area and I'm twenty-two year old Christian homeschool graduate. No, I don't have a Southern accent. I'm actively pursuing my dream to become a published author by submitting like crazy and writing even "like crazier." I've won Teen Writer of the Year at the Florida Christian Writers Conference and the Believer's Trust's (now SON Studios) Beyond the Steeple Award for my book Red Hood. I'm also the movie editor for the site Geeks Under Grace where I spit and polish reviews and articles about movies over my six or so writers. On the side, I do some freelance editing.

I've wanted to write since I was very little, but I actively started pursuing it at sixteen after I attended my first writers conference. It's a tough career path, but I feel like this is what God's calling me to do. I've written six books and around half a million words including rewrites and submitted to many agents and editors during my pursuit of my dream. I'm determined to get there.

Career aside, I love drawing my characters. It's one way I get to know them by making them come to life in my sketchbook. I play the piano and I've even tried to write music for my books. I'm also absolutely obsessed with tea. I'm a humongous geek. I've been to conventions, met celebrities, I've cosplayed, and I'm part of countless fandoms, including The Lord of the Rings, The Hunger Games, The Chronicles of Narnia, Avatar: The Last Airbender, Castle, Sherlock, and Doctor Who.

That's a bit about me. It's always awkward writing bios, but there you are!

Leave your questions in the comments or in the google form (trying this out) and I'll answer your questions on the 18th! Have you ever done a Q & A before? Thank you!