A Book Review of Illuminae by Amie Kaufman and Jay Kristoff 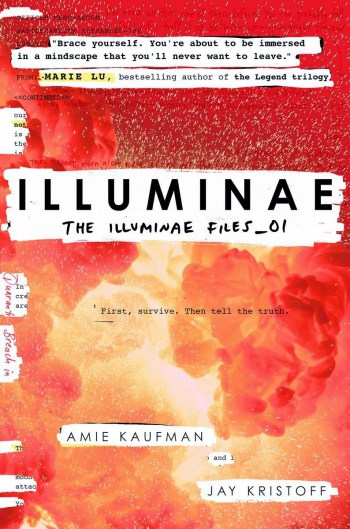 This morning, Kady thought breaking up with Ezra was the hardest thing she’d have to do. This afternoon, her planet was invaded.
The year is 2575, and two rival megacorporations are at war over a planet that’s little more than a speck at the edge of the universe. Now with enemy fire raining down on them, Kady and Ezra—who are barely even talking to each other—are forced to evacuate with a hostile warship in hot pursuit.
But their problems are just getting started. A plague has broken out and is mutating with terrifying results; the fleet’s AI may actually be their enemy; and nobody in charge will say what’s really going on. As Kady hacks into a web of data to find the truth, it’s clear the only person who can help her is the ex-boyfriend she swore she’d never speak to again.
Told through a fascinating dossier of hacked documents—including emails, maps, files, IMs, medical reports, interviews, and more—Illuminae is the first book in a heart-stopping trilogy about lives interrupted, the price of truth, and the courage of everyday heroes.

I've heard about Illuminae for some time and though I was skeptical about the format being a compilation of documents, I was also intrigued by the idea, since I really liked how Ransom Riggs told part of Miss Peregrine's Home for Peculiar Children with pictures. Now I've finally given it a shot.

The Plot: The plot was a bit difficult to follow at first because the book starts out with audio transcripts from interviews with two teens that survived an attack on their space colony. The book has a sort of omniscient point of view as you looked at the emails, documents, surveillance reports, private chats, etc. of at least ten people. It involved a lot of space travel, evading an evil battle ship, and surviving a deadly virus that turns people into crazy monsters. It was pretty interesting, but because this is a bunch of documents, I found myself not as engaged in the plot as I'd like to be. Because it's a group of documents it automatically feels like you're reading it in the past not engaging in it in the here and now like a book written traditionally.


The Characters: Ezra and Kady are the main characters. They're sassy and spunky, but geez do they have mouths on them. It got really annoying dealing with their potty mouths. Ezra was my favorite out of the two, though Kady's hacking was pretty fun. The book also goes into a lot of officers' and scientists' points of view. My favorite had to be the insane AI AIDAN's point of view, because his was the most unusual and with the least cursing. But it was cool being in the AI's point of view, because it was the closest point of view out of the others and it was neat seeing the thought process of an artificial intelligence.

The Setting: The setting is mostly two space ships the Alexander and the Hypatia. You don't get a ton of description because of the book formatting, but it also has some diagrams of the lay out of the ships which help one get a better idea. The descriptions of outer space are pretty cool though. It was interesting how on pages involving space the text was floating in a black void, but it was also confusing sometimes, because it was hard to follow the order of the sentences. The culture was also interesting with their own slang like "dusted" and "chum."

Epic Things: I guess the most epic thing was AIDAN. Having the ship as his body was pretty cool.

The Theme: One theme that stuck out with Kady was her seeking a normal. And I found that interesting. At one point in her personal diary, she talks about how she misses her stuff, because they were something to hold onto, because they were hers and they were normal. I really related to that because most of the reason why I hold onto things is because they have some attachment to a memory or something I love.

Content Cautions: The thing that miffed me about this book the most is the amount of profanity, sexual innuendo, and pornography references. I know this book involves military and military swear, but there's a point of overkill. Also the sexual innuendo and pornography references were totally unnecessary. Some were supposed to be humorous, but I found them off putting. Obscene amounts of f***, sh**, and a** were redacted, but apparently godd***, d***, and h*** are acceptable enough swear words to not be redacted and there were twenty-eight usages of h***, nineteen usages of godd***, and six uses of d***. There are also usages of the bird.

There's a good bit of violence, especially involving the Phobos virus, including decapitation, bludgeoning, scratching out eyes, slitting throats, and on one document in the book there's fake blood splatter across the page. There's also mention of naked decapitated bodies.

1.) Telling a Story Through Documents - This was certainly a unique novel experience and not like anything I'd read before. I believe telling a story like this has its ups and downs. It can feel like you're uncovering something secret, but at the same time it distanced me as a reader. Personally I'd prefer a book that had the occasional document mixed with traditional storytelling. Some of the reports I suppose gave a bit of that, but I would prefer more of that and less documents and chat records.

How this can be applied to writing: This is an interesting format of storytelling to consider. Have you ever thought of this?

Conclusion: I found the idea of this book very creative, but I'm not sure I could do another book like this, especially with this much profanity. Three stars. 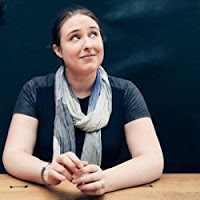 Amie Kaufman is the New York Times and internationally bestselling co-author of The Illuminae Files (Illuminae, Gemina) and the Starbound Trilogy (These Broken Stars, This Shattered World, Their Fractured Light.) Her award-winning books are published in almost 30 countries, and she is based in Melbourne, Australia, where she lives with her husband, their rescue dog, and an extremely large personal library. To learn about her latest releases or be notified about events and signings in your area, you can sign up for her newsletter at www.amiekaufman.com.

Jay Kristoff is the New York Times and internationally bestselling author of THE LOTUS WAR, THE ILLUMINAE FILES and THE NEVERNIGHT CHRONICLE. He is the winner of two Aurealis Awards, an ABIA, nominee for the David Gemmell Morningstar and Legend awards, named multiple times in the Kirkus and Amazon Best Teen Books list and published in over twenty-five countries, most of which he has never visited. He is as surprised about all of this as you are. He is 6’7 and has approximately 13030 days to live. He abides in Melbourne with his secret agent kung-fu assassin wife, and the world’s laziest Jack Russell. He does not believe in happy endings.