Writing Lessons from Video Games: Conquest of the Longbow 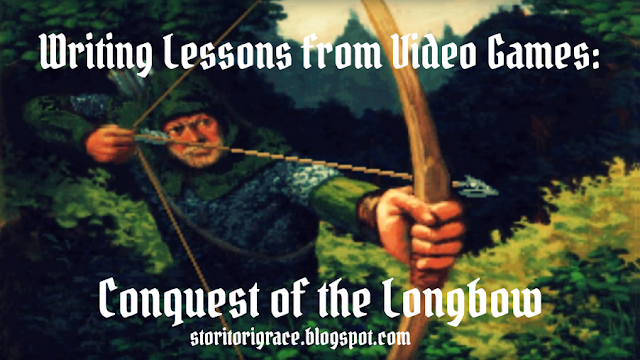 If you've been reading my blog for any amount of time you know I'm very into classic PC adventure games from the 80s and 90s. Thanks to a legal website called Classic Reload that has archived dozens of my favorite classic PC games, I've been able to replay some of my favorites including Conquest of the Longbow, which is my favorite version of the Robin Hood version (Yes, even more than BBC Robin Hood).

In this game, King Richard the Lionheart has been captured by King Leopold in Europe and the evil king is asking for a hefty ransom for him. Prince John and all of his minions are doing everything they can to keep King Richard from ever reaching British soil again while Robin Hood and his Merry Men are trying everything in their power to raise the money for the ransom and bring King Richard back to England to end the Sheriff of Nottingham's, The Prior of Fens, and Abbot of Saint Mary's oppressing grips over Nottingham. 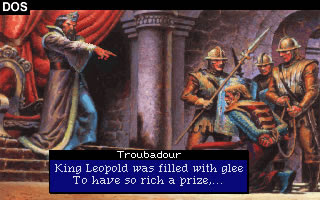 1.) Introducing Magic Into a Non-Magical Story - The biggest change this game has over any other version of Robin Hood I've seen is that this tale incorporates druidic legend. This worked seamlessly since Robin Hood is a legend himself and the magic originates in England as well. Why hasn't anyone else thought to do this?! During the game you encounter, the Green Man (a tree spirit), a pixie, and Wil'o'wisps.  This tied in really well with the mystery of Sherwood Forest and why the Sheriff's men hesitate to enter there. You also gain possession over rings that have sway over fire and water which ties into druid elemental magic.

How this can be applied to writing: Have you thought of taking a non-magical story and adding magic? Taking the magic from the origins of the same story can help the magic tie in well without making it feel out of place.

2.) Having Religious Villains Without Disrespecting the Religion - The Abbot of Saint Mary and the Prior of the Fens are two prominent villains of the story. The Prior of the Fens is actually an ex-military officer and the Fens monks use their monastery as a front to do whatever evil they want. The Abbot of Saint Mary uses charitable donations to help him live his life in the lap of luxury. These are both terrible representations of the Christian faith, but to counteract their terrible examples we have Friar Tuck, who is hardworking, generous, and caring toward others, including Robin and the Widow.

How this can be applied to writing: It's a reality that people use religion to their own gain, but having someone as a correct example of the religion can counteract a message that could say that the religion or all religions are bad entirely.

3.) Stringing Together An Assortment of Elements with One Goal - There are many legendary stories of Robin Hood like how he split an arrow in a tournament, how he had a band of Merry Men, how he fell in love with Maid Marien, how he foiled the Sheriff of Nottingham, and how he was the Earl of Huntington at one point. So how do you string all of these aspects of Robin Hood into one cohesive plot while still being true to the Legend? The biggest thing was giving them the overall goal of raising King Richard's ransom. Two examples in the game are that you win the Gold Arrow at the tournament by splitting an arrow so you can add the arrow to the ransom money and at the end, Robin is given the title of Earl of Huntington.

How this can be applied to writing: Do you ever have a bunch of scenes and bits you want to incorporate into a story? Try coming up with one goal then seeing how you can tie those elements into accomplishing that one goal.

4.) Turning a "Damsel In Distress" Into a Strong Female Character - With the exception of BBC Robin Hood, Marien has dominantly been a damsel in distress. Robin always saves her from whatever trouble she is in and Marien seems to just be there to give him a love interest. In this version, Marien is a priestess of forest and has a lot of important information and contacts that you need throughout the game, making her involvement essential to the plot. No, she's not swinging a sword, but she is awesome in her own way, which is why I love her so much in this version.

How this can be applied to writing: Have you thought of taking a stereotypical damsel in distress character and empowering her? 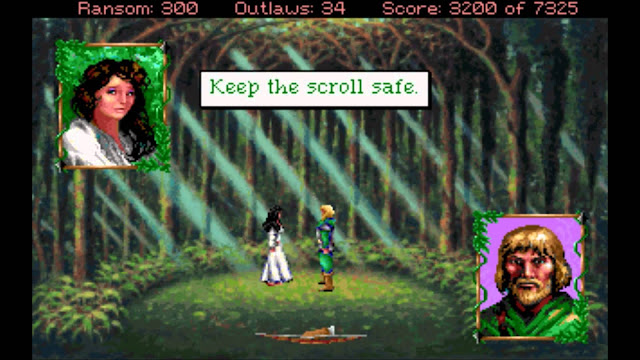 5.) Incorporating Secret Codes - The game's creator Christy Marx invented the druidic hand code for the game. Learning it becomes essential as it's used to communicate with trees and plants and it becomes a code between Robin and secret contacts. This is a really fun element of the game and it creates a neat lore unique to the story.

How this can be applied to writing: Have you thought of creating a code for your story? How can the code be used? How can you make it unique to your story world? 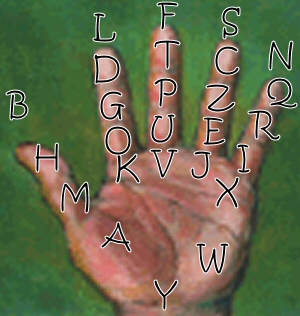 Conclusion - Can you see why I love this game? It's such a fun version of Robin Hood! If you hop over to Classic Reload to play it, let me know!

Have you played Conquest of the Longbow? Have you noticed these writing aspects? What movies have you noticed have good writing? Let's geek out together!