A Book Review of Green by Ted Dekker

As foretold by ancient prophets, an apocalypse destroyed Earth during the twenty-first century. But two thousand years later Elyon set upon the earth a new Adam. This time, however, he gave humanity an advantage. What was once unseen became seen. It was good and it was called...Green.

But the evil Teeleh bided his time in a Black Forest. Then, when least expected, a twenty-four year old named Thomas Hunter fell asleep in our world and woke up in that future Black Forest. A gateway was opened for Teeleh to ravage the land. Devastated by the ruin, Thomas Hunter and his Circle swore to fight the dark scourge until their dying death.


That was then. Now the Circle has lost all hope. And Samuel, Thomas Hunter's cherished son, has turned his back on his father and is aligning dark forces to wage the final war. Thomas is crushed--but determined to rescue the Circle and his son even if he has to cross two worlds to do so.
Series: The Circle Series (Book 4)
Genre: Adult Fantasy
Publisher: Thomas Nelson Inc; Reprint edition (June 1, 2010)
Page Count: 392 pages

After reading White I honestly didn't know what else there was for the Circle Series to tell. This book felt like an afterthought and it definitely went into a direction I didn't expect.

The Plot: This plot takes place about twenty years after White and allegories a lot of End Times events such as the antichrist and the Mark of the Beast, so this definitely gets into some dark content. The plot finally makes room for Thomas's progeny who play key roles in the plot, especially Samuel. The ending was very open-ended in my opinion, especially the roundabout alternate ending so I wasn't as satisfied as I was in the previous book.

The Characters: Maybe it's just me but I had trouble relating to sixty-year-old Thomas. I'm just not in that place in my life. I related to feeling like God is leaving you hanging and He doesn't feel like he's there at times, but it was hard to relate to his place in life if that makes sense. I've read books with characters who are way older than me and still found a way to relate but here I just felt a disconnect.

Chelise was an interesting character, especially after coming from a very different lifestyle and dealing with her parents not being in the faith. I feel like that's a very relatable struggle for a lot of people.

Any characters that were close to my age were either misguided or well evil. Samuel had good intentions but his ideals were skewed, but Billy and Janae were nutcases. They talk about embracing the evil within them and falling in love with Marsuuv (who's a demon). Both of them also have some interesting ... powers that I'll talk more about later, but they reallly seemed to come out of left field.

The Setting: Pretty much the same places we've seen in the previous books. The desert, the forest, and Bangkok.

Epic Things: I liked that the Scabbing Disease was broken down scientifically. I found that really fascinating cause I'm a science nerd. XD Even though there was a lot of content in it, I liked the scene that mirrored the Prophet Elijah's battle with the priests of Baal cause I like Elijah's story a lot.

The Theme: The endurance of faith and the end times are primarily focused on.

Content Cautions: Out of the entire series, this book has the most content. There is a looot of violence, sexual content, and occult behavior. The violence includes severed heads and limbs, and lastly eyes being gouged out and then replaced with different eyes. Is this Itachi and Sasuke again? XD That show trades eyes like Pokemon cards. Anyway ...

The occult content includes multiple instances of animal sacrifice and human sacrifice, multiple instances of evil characters drinking blood both animal and human, mass bleeding out for ritualistic purposes, upside down crosses, getting naked during occult rituals, the mark of the beast, and even getting literally close and snuggly with demons.

What We Can Take Away For Our Writing:
*SPOILERS*
1.) Don't Introduce a Concept That Hasn't Been Foreshadowed Anywhere in the Whole Rest of the Series - I think Dekker slipped up a bit here. He introduces supernatural elements in the last book that were never mentioned in the first two: telepathy and vamparism. The telepathy is more excusable because Billy, who's the telepath, says how he got the ability from the power of the blank books of history. Okay I think I can swallow that, but the telepathy only works if he makes eye contact. That ability seems to fizzle out later on in the book so why did he have it in the first place?

The one that really threw me for a loop was at last minute Janae being revealed that she's half vampire. WHAT?! Where did that even come from? It turns out that Monique's one night stand was a vampire and that vampires come from a demon who lived on earth, but whoa whoa whoa there has been no mention in this entire four book series until now that earth has any supernatural beings.

How this can be applied to writing: I felt really cheated by these randomly introduced elements. If they were masterfully foreshadowed, you go dude, but they weren't and I believe they should have been left out.

Conclusion: This was my least favorite book of the series. It just didn't leave me satisfied. 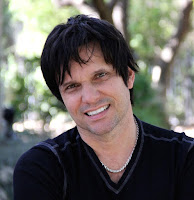 Ted's passion is simple: to explore truth through mind-bending stories that invite readers to see the world through a different lens. Story is the shortest distance between the human heart and truth, and to this he has devoted his life.

Check out my reviews of the previous books in the series, Black, Red, and White!