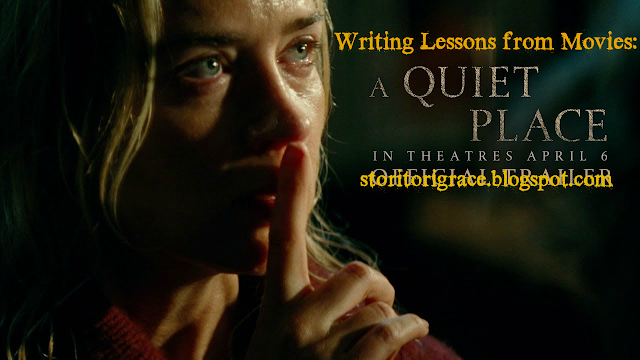 I don't do horror movies. I'm the one in the theater that puts my hoodie over my head and texts while the creepy horror trailers roll by. I don't do scary images. They creep me the heck out. NOPE NOPE NOPE. The only horror I've dabbled in is Supernatural, Grimm, and Stranger Things, but I don't look at the scary parts. I like suspense, but I don't do warped faces, demonic creepifying, rotting flesh crap.

A Quiet Place is the first horror movie I've ever been to in the theater and I was a little nervous, but I came out of the theater absolutely amazed. There are a lot of jump scares and it's very intense, but nothing scarred me in the slightest. I was absolutely blown away by the masterful storytelling, impressive acting, and awesome soundtrack. I adore its themes of unconditional love, loss, and its pro-life message. I've seen the movie three times and I haven't seen a movie that many times in theaters in years.

A Quiet Place is about a family who lives in a post-apocalyptic world with monsters that have extremely sensitive hearing. If they hear any loud sounds they hunt you. The family is struggling to survive while also preparing for the arrival of a new baby.

Warning Spoilers: The biggest ones are in point four and five. 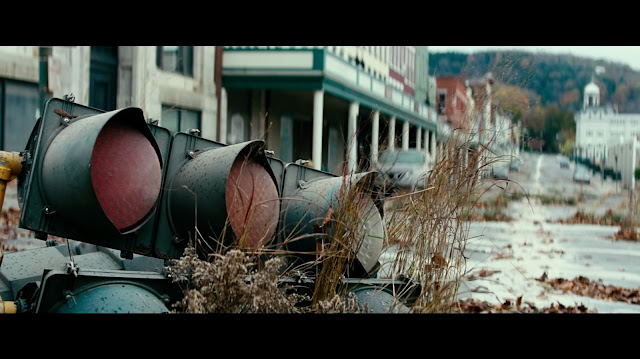 1.) A Deaf Main Character - Regan Abbott is deaf and so is the actress. She's a character who lives in silence on a daily basis. This poses as a danger for her in the film, but because of her disability, the Abbott family knows sign language, which is how they communicate in a world where they have to be as quiet as possible. Growing up I knew two families who grew up with deaf family members and the whole family had to learn sign language to communicate.

Also, Regan's deafness doesn't define her as a character. It's a big part of her life, but she's more than just the deaf girl in the story. She has a key role in the plot and has a beautiful character arc as she deals with the crushing regret and grief of losing a brother. I believe this is a fantastic portrayal of a deaf character. 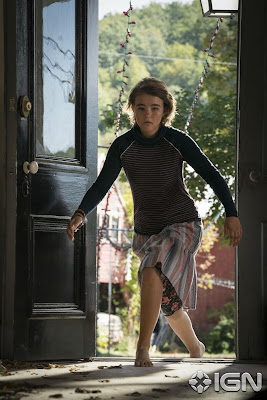 2.) A Story with Little to No Verbal Dialogue - Most of this movie's dialogue is in American Sign Language with subtitles. There's maybe a paragraph or two of verbal dialogue. This made for a totally unique theater experience and added more intricacy to how this family has had to live their lives for over a year. I took a semester of sign language and I had a deaf piano teacher so I've been around ASL a lot in my life, so it irks me when sign language isn't done right.

Actress Millicent Simmonds coached the cast on their sign language so it was done correctly. For example, there are no articles (the, a) or verbs such as "is" and "are" (any sign language you've seen with them is called pigeon sign language which isn't official ASL) and you also mouth the words as you speak them. It helps you get your sentences straight in your head and emphasize your point. Sign language is also very expressive since you don't have tone to convey what you mean, you have to express your tone in your facial expressions.

Having to use ASL nearly exclusively also meant that the characters couldn't shout for help and also to get someone's attention you have to see the person or wave.

How this can be applied to writing: If you want to see sign language done right this is an excellent film to watch. Literary sign is more difficult to portray, but seeing it done right can definitely be applied to a literary deaf character.

3.) Forcing the Characters to Reveal Themselves Without Feeling Cheap - It's very stereotypical for characters in horror movies to be complete morons and to hide in the worst places or run in heels or to give themselves away by stupid things such as a sneeze or coughing. Another thing I really liked about this movie is that any of their "slip-ups" were perfectly logical.

It's really hard to live a life completely quiet, especially when any loud noise could have a monster come straight for you. Some of the slip-ups including a baby crying, turning on a loud toy, stepping on a nail, knocking over a lantern, and shouting in panic.

Babies cry. They don't know any better. A young child doesn't always listen to parents and when he says a toy, he's going to be interested and sometimes he will disobey which in this child's case proved fatal. When you're in intense pain you're going to make noise, it's just what happens. It's involuntary. Two kids were playing a board game and one accidentally knocked over a lantern which made a loud crash. It was an accident. They weren't trying to be foolish. When you see someone you love being hurt right in front of you, a verbal reaction is often an instinct.

All of these slip-ups were just human and didn't make any of the characters look like complete idiots that made you roll your eyes. 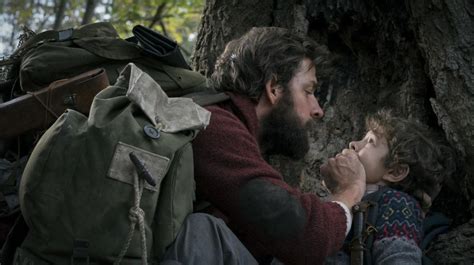 How this can be applied to writing: If you're writing a story and your characters are supposed to be quiet but you want to have the monster find them, have them slip up in a way that makes sense. Make it logical. Make it human. Make it not make the characters look like morons. 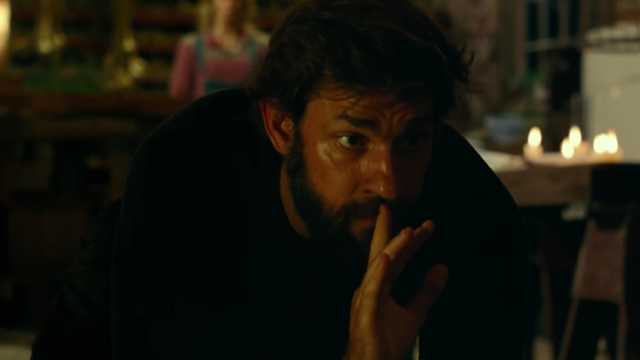 4.) Finding the Monster's Weakness - The biggest struggle in this film is that these sound-sensitive monsters or dark angels as shown in the news headlines in the film seem invincible. They're incredibly fast, they can hear noises from miles away, and their armor is bulletproof. This is what makes them be such formidable villains to the characters and why they were so devastating to society.

Lee Abbott is actively trying to find the dark angel's weakness, but it's really hard to do so when he can't communicate with anyone and he has to protect his young family. He inadvertently gives Regan the key to the monster's demise and by the conclusion, the family discovers what it is and you know they're going to be okay.

People could say, why didn't anyone else in this world figure this out? Number one it's very hard to experiment with anything when one sound could kill you. Number two if anyone did find this out how are they going to tell someone else? The movie did so well in filling in any plot holes. 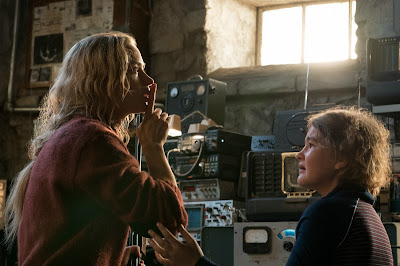 How this can be applied to writing: When you have a nearly invincible monster in a story make sure there's a good reason why no one has found a way to kill these things or why it's so difficult. Make finding the weakness logical. Attack on Titan does a good job at this. 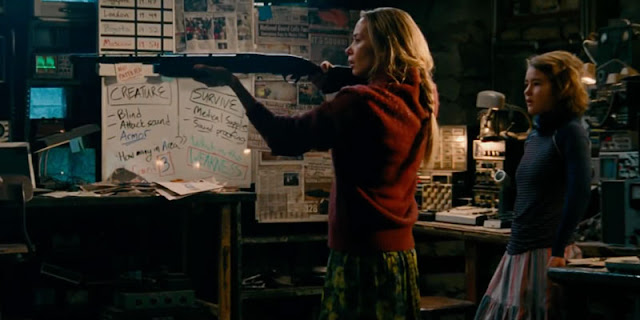 5.) The Unconditional Love of Two Parents - One of the biggest themes of this movie is parental love and I have not seen such an amazing portrayal of godly parents in a long time.


Ephesians 5:33 However, each one of you also must love his wife as he loves himself, and the wife must respect her husband.

Ephesians 5:25 ESVHusbands, love your wives, as Christ loved the church and gave himself up for her,

Lee and Evelyn Abbott love their children more than anything in the world. They respect each other and love each other deeply.


"Who are we? Who are we if we don't protect them?" ~ Evelyn Abbott

Lee is a father who leads his family with strength and sacrifice. Evelyn is a mother who respects her husband's leadership and loves her children so much that she would risk herself to bring new life into the world. They compliment each other. They live out as the spouses that Ephesians spoke of. In turn, the children respect their parents and know how much their parents love them even if for one that isn't until the end.

Lee ends up giving everything he has to protect his children because he truly loves them more than himself. 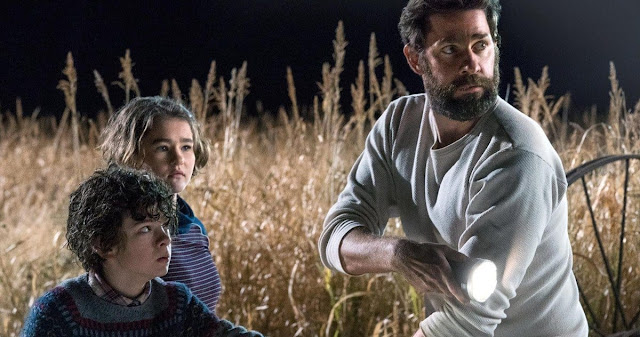 How this can be applied to writing: I know I've talked about this topic before, but it's never bad to write characters who can be role models. Evelyn and Lee Abbott are definitely role models for husbands and wives. I was so touched seeing them and their tenderness nearly made me cry. Small moments such as Lee kissing Marcus's forehead, Evelyn trying to make Marcus laugh, Evelyn protecting her babies from an evil monster, and Marcus carrying his son to safety were so powerful. 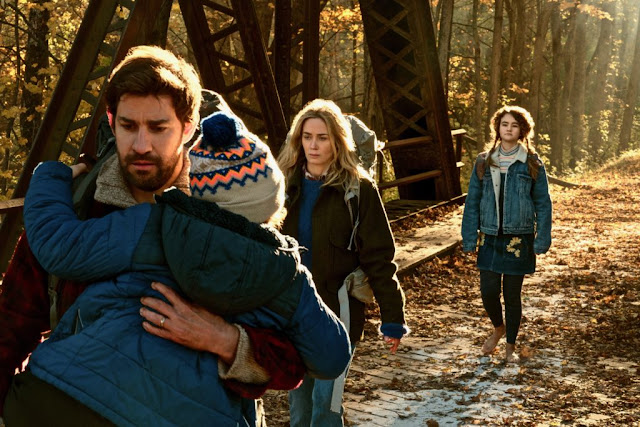 Conclusion - I could go on and on about A Quiet Place and the impact it's made on me, but the best thing I can say is to watch this film and watch in the theaters to support it. We need more films like this one. 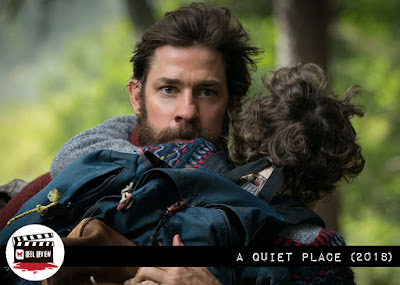