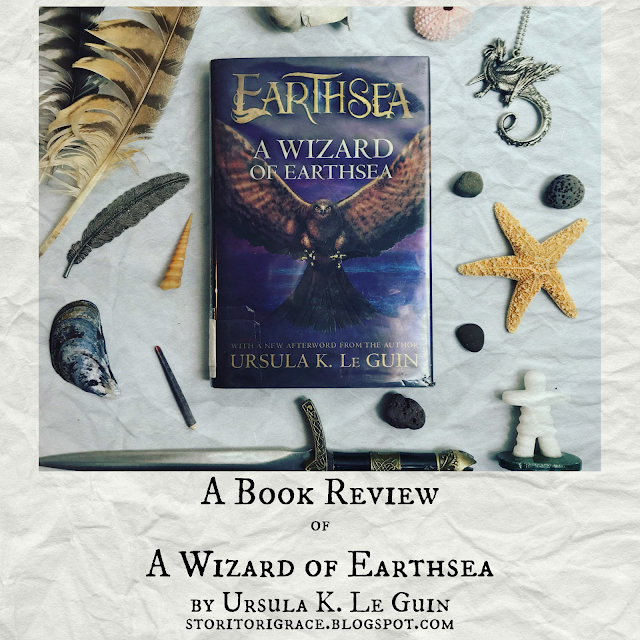 
The Plot: This tale takes place over years. It starts when Ged is very young and then the readers watch him grow up. Because of this timeline, the plot moves pretty slowly. It doesn't pick up until he's an adult, so I found myself going in and out from interest waiting for it to really hook me. I did enjoy sections including the climax but I had to slog through a lot of it. Also because of the older style of writing with a strong narrator voice as opposed to character voice I couldn't get as immersed as I wanted to. I guess I don't have the nostalgia to look past that like I do with The Lord of the Rings and The Chronicles of Narnia.

The Characters: Ged Sparrowhawk is the main character. Readers watch him grow up from a small child in a small town with a talent for magic into a powerful wizard. He definitely isn't the perfect hero. He deals with very human emotions like pride, resentment, and jealousy. The scars he gains during the story help define him as a character. He also has a long history for his magical education. He starts being taught by a relative then a master and then goes to a school.

Ged also acquires a familiar named Hoeg. He's a made-up creature called an otak. I thought he was super cute. I also like Ged's fellow wizard Vetch. I liked the villain as well, but for spoiler reasons I can't talk about her too much lol. Ged's main nameless foe is also very interesting and it was fun to find out its mysteries. The other characters didn't stick out as much to me.

The Setting: The most impressive part of this book is definitely the worldbuilding. It's very elaborate and detailed. During traveling almost every aspect of Earthsea's geography is described. It's also interesting that magic has more or less power or works differently in different countries.

The magic system is very fleshed out and unique with a good checks and balance system to keep characters from becoming over-powered. Magic works in a balance. I also like how it's connected to names.

Speaking of names I really like how because of the power of names that's incorporated into the culture. Telling someone your true name is very special and a huge sign of trust. I also like how in the Old Speech someone can't lie. I thought that was a neat trait of a language.

The Theme: Throughout the story Ged is chased by a shadow he summoned when incorrectly using a spell. He can't defeat the shadow because he doesn't know what it's named. It takes him until he has nowhere left to run that he can't find the name of the shadow because it's his name and it's a part of him. Until he can accept that dark part back into him he couldn't be whole. Like the magic he's learned, he also has a balance.

Content Cautions: There isn't a ton of questionable content. No swearing, but some violence and a lot of magic. If you have a problem with magic you won't enjoy this book since it is very centered on wizards and witches. There is some violence which includes most notably child abuse, enemies die by falling and being stabbed, a character is badly scarred by a monster, and children's corpses are mentioned.

Geographical Knowledge in a Disconnected Society - When Ged travels about the world of Earthsea, he encounters many people who haven't heard of things he's familiar with even vast countries. He even met two siblings marooned on an island who forgot that there was more beyond their small island home.

How this can be applied to writing: When we live in an age that it's just a few taps away to find out about anything we want, it's hard to imagine there was a time when information was difficult to come by. Because of education systems or lack of there of people didn't know that things existed beyond their small worlds. It's something to remember when writing about time periods before the Data Age.

Conclusion: There were a lot of things I liked about this book, but a lot I didn't. I'm willing to try another Le Guin book. Do you have any suggestions for me? 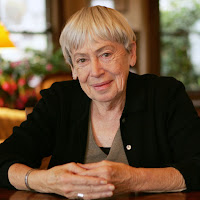 About the Author: Ursula K. Le Guin (1929-2018) has published twenty-one novels, eleven volumes of short stories, four collections of essays, twelve books for children, six volumes of poetry, and four of translation, and has received the Hugo, Nebula, Endeavor, Locus, Tiptree, Sturgeon, PEN-Malamud, and National Book Award and the Pushcart and Janet Heidinger Kafka prizes, among others. In recent years she has received lifetime achievement awards from World Fantasy Awards, Los Angeles Times, Pacific Northwest Booksellers Association, and Willamette Writers, as well as the Science Fiction and Fantasy Writers of America Grand Master Award and the Library of Congress Living Legends award. Le Guin was the recipient of the Association for Library Service to Children’s May Hill Arbuthnot Honor Lecture Award and the Margaret Edwards Award. Her recent publications include the novel Lavinia, Words Are My Matter, an essay collection, and Finding My Elegy, New and Selected Poems. Her website is UrsulaKLeGuin.com.