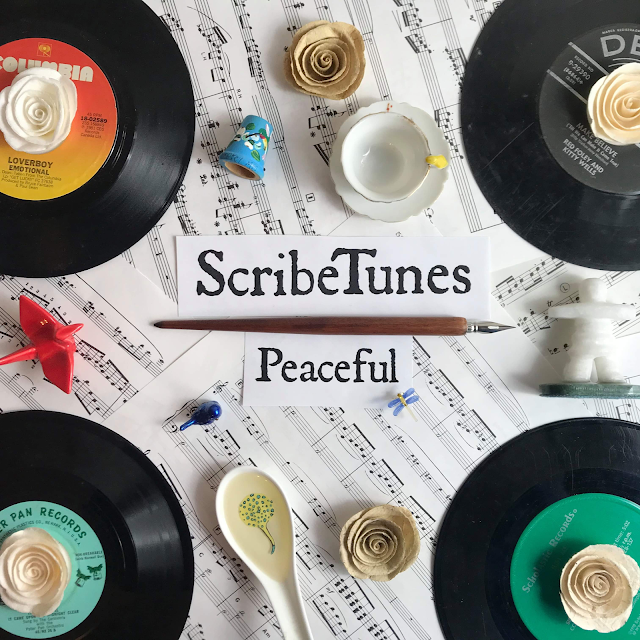 I’m excited to announce the launch of ScribeTunes! American and Canadian powers combine in a collaborative project between me and Cassia Schaar to help writers have the best music for their writing. Have you ever spent half an hour or more trying to find the right mood music when you should be writing? Then this project is for you! Every other week we will be releasing playlists on Spotify and Apple Music that are themed for any writing scene you can think of!

This week we’re releasing a playlist of Peaceful tracks. Not exactly happy or sad but everything is calm in the world right now for your character. Give the playlists a follow because we're adding new tracks as we find them!

We also want to talk a little about why we chose some of these tracks. These and more are included in our ultimate playlist!

“The Streets of Whiterun” by Jeremy Soul (The Elderscrolls IV: Skyrim)
Skyrim boasts one of the best video game soundtracks for its wide variety of tracks and especially peaceful ones. This is gentle piece with the lead in piano and strings is perfect for your characters walking through villages or forests on a sunny day. It keeps a consistent sweet tone throughout that pulls you into a serene mood.

"City on the Mesa - Part 3 - Onwards to Meridian” by Joris de Man (Horizon Zero Dawn)
This is a faster-paced piece with soft percussion, violin, and guitar. This has a great melody for walking down a long dirt road or perusing a busy marketplace. It maintains that pace throughout so it’s perfect for looping and though the instruments imply a bit of a western tone it still holds up for a variety of genres.

"Everywhere and Nowhere” by Junkie XL (Divergent)
Divergent has some of my favorite soundtrack pieces and though this film is science fiction its tracks work for background music across many genres. This quiet sample with guitar and piano has bittersweet undertones and it’s good for a scene where your character is at rest but has a lot on his or her mind.

"A Quiet Life” by Marco Beltrami (A Quiet Place)
Though this is a peaceful playlist that doesn’t mean your character is at peace. This track has a sullen tone with the music box and violins. This is good for scenes showing difficult lives and tough decisions ahead.

“Sun Inside” by Antonio Pinto (The Host)
This has a much happier tone than the previous two pieces. It reminds me of farms and family. I love the simplicity of the guitar with just a touch of strings. It puts me at ease whenever I listen to it.

"Take Her Down" by The Newton Brothers (Haunting of Hill House):
The name and the show may suggest otherwise, but this is actually a very relaxing piece lead by piano and supported by woodwinds and low strings. I love how the tone and pace don’t change throughout and how there’s an underlying element of mystery as if something COULD happen very soon. It’s perfect for an evening conversation, or for a walk through the old farm that leads to the discovery of something mysterious.

"Painted World" by Two Steps from Hell (Illumina Anthology):
The symphony and quiet choir in this one is GORGEOUS. It reminds me of something from Lord of the Rings or Avatar. When I play it during my DnD sessions, my players often ask if that’s where it’s from. "Painted World" could fit into TONS of genres and what makes it so perfect for this playlist is the persistent sense of innocent wonder, and the soft fade out at the end—perfect for looping.

"She’s Not a Mundane" by Atli Örvarsson (The Mortal Instruments: City of Bones):
"She’s Not Mundane" is an interesting one because it starts with a bit more tension than you’d expect from one on this track. That tension rises and falls at times but it mostly remains mellow. I like it for a peaceful scene though because it reminds my emotions that the characters aren’t done yet—they won’t be until the end of the book—or series. Sort of like telling me “this is nice but don’t get too comfortable.”

"We Could Go Home" by James Newton Howard (The Hunger Games):
It’s rare, in my opinion, for movie tracks to hold a steady emotion for the duration of the piece—that’s kinda more video game territory. But "We Could Go Home" is a beautiful exception. Both in and out of the context of the movie, the instruments blend together to create hope and respite. To me, it’s the sound of a sunrise.

"Chat with Chuck" by John Paesano (The Maze Runner):
Who said peaceful had to be happy the whole time? I love "Chat with Chuck" because it has an element of bittersweetness to it that I LOVE to weave into my stories. If you need a song that has a twinge of sorrow without diving into the drama, stick this one on repeat—It loops REALLY well because of its slow start.

"Á la Lumiére des Diamants" by M83 (You and the Night):
Hi, Canadian here. I come across and listen to a lot of French music. M83 is one of my FAVOURITES. This one has some light vocals and radiates a casual beauty that would be perfect for romantic scenes or just a quiet scene alone with an artistic character. P.S. Á la Lumiére des Diamants translates to “In the Light of Diamonds”.
Disclaimer—this movie is NOT PG in any way shape or form. I haven’t seen it but love M83 too much not to listen to the score.

"Sofia Sartor" by Lorne Balfe (Assassin’s Creed Revelations):
Another one I use at my DnD tables! Of all my track choices, this one is the shortest but I wish it were four times longer. Its tranquil melody could probably lull me to sleep. I can totally picture a character smiling at some point in this track—you’ll see what I mean when you listen to it!

These playlists are collaborative! We’d love to have your suggestions for new pieces to grow these music archives. We just have a few guidelines:

To thank you for helping grow this tool for writers and get the word out we’re doing a quarterly drawing for a three month Spotify or Apple Music subscription! Suggested tracks that are already in the playlist will not count as entries.

Leave your suggestions in the comments! And come back on January 31st for the Soft-Tension playlist! Happy writing!
Posted by Victoria Grace Howell at 1:00:00 PM