Book Review and Writing Lessons: The Son of Neptune by Rick Riordan 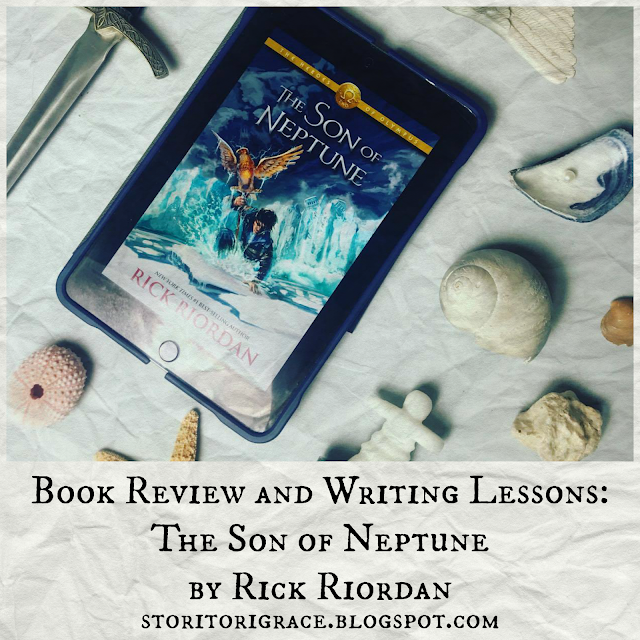 Percy is confused. When he awoke after his long sleep, he didn't know much more than his name. His brain-fuzz is lingering, even after the wolf Lupa told him he is a demigod and trained him to fight. Somehow Percy managed to make it to the camp for half-bloods, despite the fact that he had to continually kill monsters that, annoyingly, would not stay dead. But the camp doesn't ring any bells with him. Hazel is supposed to be dead. When she lived before, she didn't do a very good job of it. When the Voice took over her mother and commanded Hazel to use her "gift" for an evil purpose, Hazel couldn't say no. Now, because of her mistake, the future of the world is at risk.

I'm so happy to be back in the world of Percy Jackson! It's been a while, but from the first page, I was back to a happy place. This book was such a breath of fresh air for me during this time in my life.


The Plot: Like all the Rick Riordan books I've read this involves an epic quest to stop an evil mythological creature and I'm all in for it. Three kids battle monsters to save the world. So it's full of crazy monsters and gritty battles with a dash of comedy. BRING IT ON!

The Characters: Rick Riordan's character, in general, are just fantastic.

I'm so happy to be back in Percy's head! Percy helped me get through a dark time in my life ten years ago and I've missed him. I was so worried about him not remembering anything!

We've got so many new faces too! I loved the second and third POV characters Frank and Hazel. They're both such endearing and fleshed out characters. I love so much about Frank like that he's from Canada and his struggle with finding his talent and feeling out of place. He's very relatable. Hazel has just the coolest powers and backstory that I can't spoil here. But she's so selfless and amazing. I love her.

There are so many great side characters well, Ella and Arion being my favorites. Ella the red harpy is just so precious and you want to hug her and keep her and protect her. Arion is just hilarious. He's the most arrogant horse you will ever meet! Also, Tyson the Cyclops is a precious bean.

The Setting: I love seeing the Romanized Greek mythological figures and the differences between Camp Half-Blood and Camp Jupiter. It's a very unique experience. I was never crazy about Roman mythology as a kid because I thought they were being unjust to the Greeks haha. I was like, "YOU BUNCH OF PLAGERIZERS!" But now I'm more open to it. Even though the Roman camp is generally more strict, I also loved how Riordan satirized some more intense aspects of the Roman culture like making Octavian an augur who checks stuffed animal guts for divination.

I also just love seeing mythological characters modernized. I died when the kids found out the Amazons run Amazon.

It was also cool to briefly get glimpses of the Greek afterlife like Asphodel. And I loved that parts of the book were set in Alaska! You don't see that much!

Epic Things: One thing that Percy Jackson books do is always make me laugh. There were so many instances like Gorgons sampling cheesy weiners and cyclops mistaking a Ding Dong for a grenade that made me smile and chuckle and I needed that right now.

I also love the Pegasus and aure aka wind spirits mentioned in the book. And there were so many epic battles!

The Theme: Trust is a big one. Percy, Frank, and Hazel have to learn how to trust each other to succeed in their journey.

Content Cautions: This is a Percy Jackson book so it's very clean. There are very few things to note. A character drowns in oil, there is some blood from wounds but not a ton, and characters kiss. It's mentioned that someone smokes weed.  At one point someone says a** and it's implied that Arion has a major potty mouth.

1.) Distinctive Dialogue - Ella the Harpy speaks in a very specific way. Her sentences are choppy, she refers to herself in first person and she quotes books constantly. I always know when it's her dialogue without a speaker tag or action beat. Here's an excerpt so you get what I mean: 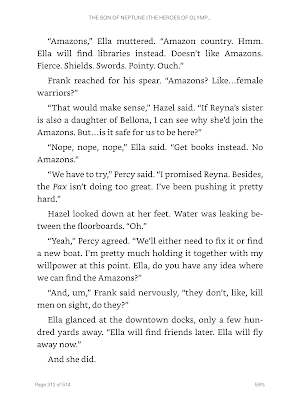 How this can be applied to writing: Giving a character a specific way of speaking can really bring them to life. Think characters like Gollum from The Lord of the Rings and Mrs. Who from A Wrinkle in Time.

2.) Implying Swearing - Arion the Horse is implied to have a potty mouth, but it's only mentioned by Percy from another point of view as he makes remarks because he understands horse. So Arion's profuse cursing is implied, but the book stays age-appropriate.

How this can be applied to writing: This is one way of keeping the cursing in a book to a minimum but another is just mentioning someone curses and then the reader can fill in what they said.

3.) Smooth Time Transitions - In a lot of scene transitions where time passed, Riordan first set the scene with something that ground the character in the present and then he had the character fill in what happened. This allowed the POV to stay intimate instead of giving a feeling of omniscience with a paragraph of catch-up. 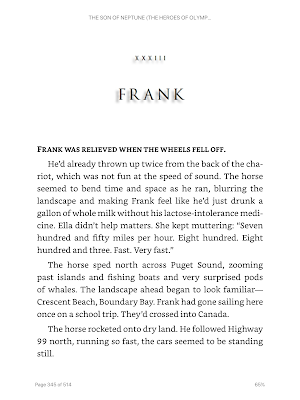 How this can be applied to writing: Shown in the image above, you can see how Riordan wrote an opening sentence and then did a recap. I've started doing this in my own writing but with my own style meaning I take a paragraph to set the scene and then go into flashback.

Conclusion: Loved this book! Definitely reading the next one!

Rick Riordan is the #1 New York Times bestselling author of the Percy Jackson and the Olympians series, the Kane Chronicles, and the Heroes of Olympus. He is also the author of the multi-award-winning Tres Navarre mystery series for adults.

For fifteen years, Rick taught English and history at public and private middle schools in the San Francisco Bay Area and in Texas. In 2002, Saint Mary's Hall honored him with the school's first Master Teacher Award.

While teaching full time, Riordan began writing mystery novels for grownups. His Tres Navarre series went on to win the top three national awards in the mystery genre - the Edgar, the Anthony and the Shamus. Riordan turned to children's fiction when he started The Lightning Thief as a bedtime story for his oldest son.

Today over 35 million copies of his Percy Jackson, Kane Chronicles, and Heroes of Olympus books are in print in the United States, and rights have been sold into more than 35 countries. Rick is also the author of The 39 Clues: The Maze of Bones, another #1 New York Times bestseller.

Rick Riordan now writes full-time. He lives in Boston with his wife and two sons.
Blog//Twitter//Goodreads

Other Books By This Author I've Reviewed:
A Book Review of the Lost Hero by Rick Riordan