Book Review and Writing Lessons: The Ballad of Songbirds and Snakes by Suzanne Collins 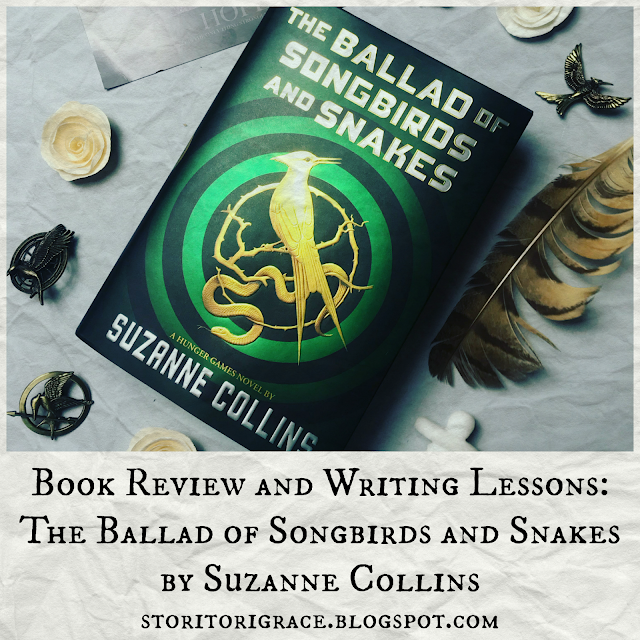 Ambition will fuel him.
Competition will drive him.
But power has its price.

It is the morning of the reaping that will kick off the tenth annual Hunger Games. In the Capitol, eighteen-year-old Coriolanus Snow is preparing for his one shot at glory as a mentor in the Games. The once-mighty house of Snow has fallen on hard times, its fate hanging on the slender chance that Coriolanus will be able to outcharm, outwit, and outmaneuver his fellow students to mentor the winning tribute.

The odds are against him. He’s been given the humiliating assignment of mentoring the female tribute from District 12, the lowest of the low. Their fates are now completely intertwined — every choice Coriolanus makes could lead to favor or failure, triumph or ruin. Inside the arena, it will be a fight to the death. Outside the arena, Coriolanus starts to feel for his doomed tribute . . . and must weigh his need to follow the rules against his desire to survive no matter what it takes.

I could hardly put this book down! So many things about Snow and the Hunger Games world make sense now! It was so cool to read about the history of Panem. Honestly, Katniss has it easy compared to the 10th Hunger Games.


The Plot: First of all, though this is a prequel, I recommend reading it after the other Hunger Games books. It will have more effect. It's best having the enigma that is Snow in Katniss's POV and then later unraveling him.

Second, the plot is divided into three sections: before the games, during the games, and a good chunk actually takes place after the games. So much happens before the games that it feels like the games started before they officially began. Suzanne Collins is great at making sure there are always stakes and tension even if that doesn't mean life and death peril. I never lost interest though during the latter half I got anxious as to what Snow's ultimate decision for his life would be so I found myself speed reading a little bit. But the ending was satisfying. My best way of saying it without getting spoilery is that it was good for Snow on the outside but not good for his soul.

The Characters: Snow is incredibly well-written. He's sympathetic enough so you care about him. At one point my heart just completely broke for him. He knows what it means to suffer, but as expected he has a downward character arc. It's masterfully done. I understand him so much more now and how he handles Katniss and how he justifies his behavior as President of Panem. Throughout the book, he teeters between choices of right and wrong as he forges his path. It's his choice in the end to become the chilling antagonist known in Katniss's story. I do think that Donald Sutherland's performance influenced this book though. A lot of his personality only revealed in the movies came into play in the book.

As is characteristic of Suzanne Collins, her side characters are just as vibrant as her protagonist. Lucy Gray is a treat. I love how Suzanne Collins gives her things that make her a signature character like her rainbow dress. She's drastically different from Katniss Everdeen so she can't at all be compared to our Girl on Fire. What they do have in common is song though. Lucy Gray loves to sing and she sings many songs throughout the book. Some old traditional songs and some we've come to know and love in Katniss's story. Lucy Gray is so full of life and at the same time so enduring and smart. You can't help but fall in love with her.

Snow's friend Sejanus is just too pure for this world and Dr. Gaul makes my skin crawl. She's an intimidating and devious villain. I loved seeing some great backstory about the mysterious Tigris as well. I love her connection to clothes and how she says that they tell her stories. There are also ancestors to familiar characters which are fun Easter Eggs to find. There are other characters I loved too but I feel like mentioning specifics would be spoilers!

The Setting: Panem at the time of the 10th Hunger Games was a very different world from the Panem of the 74th Hunger Games. The Hunger Games was far from perfection in Snow's younger years. Standard procedures in the 74th Games weren't even come up with yet sixty years prior. Panem and the Districts still have the war fresh on their minds. Many remember it vividly. It's also interesting seeing the psychology of trying to make people watch these brutal games because at first, even Capitol citizens weren't crazy about it. The way tributes were treated before, during, and after the tenth Hunger Games ... Well, let's just say that Katniss had it easy compared to this. Hunger had a way larger part to play.

A part of the book is set in District 12 and I love how vivid the setting is. As someone who's grown up in the south and was born in North Carolina, she did such a good job at describing. I love the details like the smothering humid summer heat, the muddy lakes full of fish, and even mentioning bug bites on people's legs. It just brings back a lot of memories. I also loved that Katniss aka Arrowroot flowers were mentioned.

I also love all of the songs! I can't wait for a wave of covers to come out!

The Theme: Snow mentions that Sejanus gets himself into multiple "ethical quagmire" and that describes also what Snow deals with. Throughout the book he's making formative decisions about his ideology of the world. Dr. Gaul wants to convince him that humanity is very evil and needs to be controlled and that's why it's the Capitol's duty is to keep control. She believes everyone is evil when it comes to fighting for their lives.

Sejanus presents arguments to the opposite. That there is still hope for humanity and it's worth the risk of being good in a world where everyone's pressuring you to do evil. Humanity makes mistakes but that doesn't mean that everyone is capable of great evil. Snow has to choose between these two perspectives or something in between.

Content Cautions: This is a Hunger Games book, so of course expect some violence.  There isn't any extremely graphic detail. Men hit women, a story of cannibalism is briefly described not in much detail, there's a scary mutated bunny (yeah you laugh now), human experimentation is briefly shown, someone's throat is slit, characters are shot, people bitten by snakes and wounds leak rainbow-colored pus, human-eating rat mentioned, a bullet-riddled corpse hanging from a crane, a person takes an ax to the neck, a person dies of tuberculosis, two characters openly mention suicidal thoughts, a character is beaten until dead with a board, people being dragged behind horses on display, characters get rabies and show advanced symptoms including foaming mouths, there's a good bit of blood in sections, characters die from bad falls, characters are stabbed with a trident, a character dies by a broken neck, children are badly beaten, a character dies by an ax to the head, people are mentioned to have been blown up, and three people are hanged.

There's a character mentioned to be a morphling addict. He self-medicates several times. There's a little kissing. A gay character and a lesbian character are very briefly mentioned. Some boys get very drunk and have hangovers.

There's some really minor swearing, including piss said four times and a** two or three times.

1.) Institutions Don't Start Out Perfect - The Hunger Games of Snow's youth was barely recognizable of the games we know. It was very imperfect. Lots of mistakes were made. It was also inefficient. But people just in the book start establishing new practices to make the games "better."

How this can be applied to writing: When an institution starts whether it be good or ill, there are going to be mistakes made along the way. When people try something new they're not going to get it right. In Gone, the kids' governing system is far from perfect as they try to create some semblance of order. In Queen's Resistance, establishing a new government after the fall of a previous one is a long difficult one with lots of mistakes along the way.

2.) Leave Your Chapters on a Cliffhanger - So many chapters in this book leave off on a cliffhanger that forces you to keep going, "One more chapter." Collins ends her chapters with sentences that both shocked and drew several gasps out of me.

How this can be applied to writing: There's a writing tip that says that you should start your scenes late and end them early. You want to keep your reader reading, so entice them with cliffhangers and even take it to a next level and add hooks to the beginning of each chapter.

3.) Symbolism in the Treatment of Objects - I know this is a spoiler but I had to mention this hence the warnings. Throughout the book Snow talks about how his mother's compact and rose-scented powder inside is one of his most precious possessions because he can still smell his mother with it. He loved his mother and she was very kind to him. One of his other special possessions is his father's compass. His father was a harsh and strict man.

Near the end of the book after Snow makes his decision to continue on a downward path, the powder from his mother's compact is soggy from the rain he was just in. Instead of trying to save it, he discards it, discarding one of the last tender parts of his life and instead keeps his father's compass, signifying him following in his father's footsteps.

How this can be applied to writing: Objects can be such powerful metaphors. How your character treats possessions can symbolize how they feel. When Werner smashes his radio in All the Light We Cannot See, it signifies how he's rejecting his independence for the Nazi idealism. Having characters do things like this strengthens your themes and their character development.

Conclusion: All in all this is one of the best books I've ever read. I aspire to write this well. 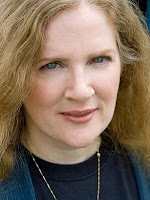 About the Author: Suzanne Collins has had a successful and prolific career writing for children's television. She has worked on the staffs of several Nickelodeon shows, including the Emmy-nominated hit Clarissa Explains It All and The Mystery Files of Shelby Woo. Collins made her mark in children's literature with the New York Times bestselling five-book series for middle-grade readers The Underland Chronicles, which has received numerous accolades in both the United States and abroad. In the award-winning The Hunger Games trilogy, Collins continues to explore the effects of war and violence on those coming of age. Collins lives with her family in Connecticut.