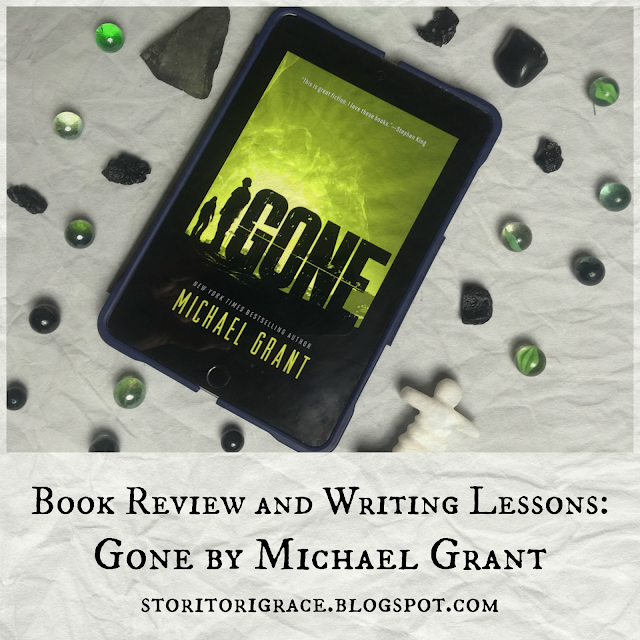 In the blink of an eye, everyone disappears. Gone. Except for the young. There are teens, but not one single adult. Just as suddenly, there are no phones, no internet, no television. No way to get help. And no way to figure out what's happened.

It's a terrifying new world. Sides are being chosen, a fight is shaping up. Townies against rich kids. Bullies against the weak. Powerful against powerless. And time is running out: on your birthday, you disappear just like everyone else. . . .

During this time of weird, I’ve been reading the Gone series with my lovely friend Cassia. This book originally came out in the mid-2000s so it’s a very nostalgic time for me and somehow this book slipped through my reading list. It’s been a blast reading this aloud with my good friend and of course doing all the voices. It reminds me of simpler times and I need that right now.

The Plot: First I must say the prose is real rough like real rough. Cassia and I were very often stumbling over long clunky sentences and rephrasing things as we read. It’s one reason I couldn’t give this book a full five Inukshuks but the plot is amazing as well as the dialogue. The latter felt very realistic and natural. There’s so much going on but it all weaves together nicely while hinting at much more to come. The inciting incident starts within the first few pages when a few hundred kids have their lives changed forever. It’s interesting to see how a bunch of kids 14 and under deal with losing all of their older siblings and parents in an instant and how they learn to survive—or don’t too late. Then there’s a whole supernatural element to worry about plus crazy kids with superpowers. On top of that, there’s a ticking clock at the beginning of every chapter and you have to figure out what that clock is counting down to. Furthermore, I kinda like that Grant mentions the gross details that other people don’t like trapped animals peeing on the floor or that a girl has her period or a girl is held hostage and has to pee so bad. It feels more real and human.

The Characters: There are a lot of characters in this book and a bunch of points of views. Sam is the main character and he has a really good character arc. I love his relationship with Astrid. It’s so cute! My favorite characters in this book have to be Astrid, Albert, Lana, and Mary. Taylor is also adorable and she made me laugh. I felt so bad for Lana. That girl had it so rough. None of the characters felt extraneous. All of them had things to do and move the story along. The author did a really good job to make sure that you remember these are kids not just adults in kid bodies in a book written for teens. Their actions made sense for young teens and children. It was also nice to see some positive portrayal of religion seeing as Astrid and Little Pete are catholic.

The villains are freaky between psychopathic kids and mutated talking coyotes these poor main characters had their hands full. Drake is just a freakazoid.

The Setting: The kids are trapped in a fictional domed off section of California called Perdido Beach. This area is a few miles in circumference but it has a lot in it like a beach, a creepy school for messed up rich kids, a desert, a nuclear power plant, and a mine. Even in the first book not everything is explored but there’s so much mystery just in the land including newly mutated freakish animals.

Epic Things: Kids with superpowers are always super fun. There’s a wide variety of different abilities. Some are more obvious to figure out than others.

The Theme: Unity is definitely a big theme. Some kids try to lord over other kids and some kids try to survive on their own but it isn’t until they band together that they have a chance of survival.

“Everyone was just killing time. But if all they did was kill time, then time would end up killing them.” ~Albert

Content Cautions: Now there’s very little swearing and sexual content besides a mention of sexual assault and characters giving the bird but the violence is a half step from an R-rating so take caution there and there is some blatant racism. Two characters were also pretty darn racist to a Hispanic kid which made me really mad at them. Gruesome wounds are described in pretty significant detail and there are a lot of disturbing scenes.

These include a badly broken gangrene arm, lots of blood mentioned, a little girl dies of inhaling too much smoke, a bulimic girl makes herself throw up, kids beat each other up with baseball bats to the point of killing another kid, a baby who died of neglect is mentioned to have been put in a garbage bag, a mutated cat is half stuck in a book and dies, kids getting torn up by coyotes, heavy bleeding from the nose and head, a boy slaps a girl across the face multiple times, kids have their hands encased in cement and are starving, kids hands are also hastily described after being in cement for days, kids threatening and attempting to kill other kids with guns, a boy whips other kids and draws blood, gross rocks fuse to skin to fill a wound, and lastly, the nastiest part is a boy gets a third-degree burn and his arm sawed off. I know this all sounds gross but trust me the book is worth it. 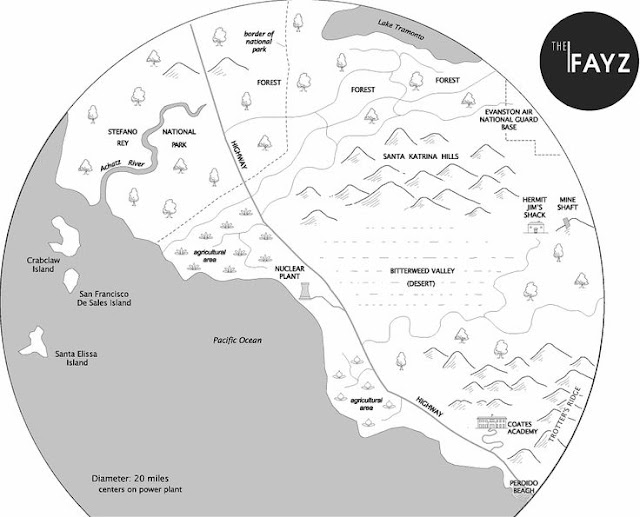 1.) Creating a Fictional Town - Perdido Beach is the fictional town of this book but there is so much detail put into it that it feels real. There’s a map in front of the book that shows details of the area. The author really put in a lot of time into it and at times, you forget this isn't a real town. It has a mix of actual stores like Ralph's and McDonald's and then fiction places like Coates Academy. It's a great setting.

How this can be applied to writing: Have you ever tried creating a fictional town in the real world? Creating a map, keeping environmental details close to the real world, and adding well-known things like stores and camps can really help make your town seem like it should be on the map!

2.)  Diversity Without Forcing It - This book has a lot of diversity and none of it feels forced. I feel like in a lot of media the show/book/movie has to have a certain amount of diverse characters and it feels like writers are just checking a box. In Gone, none of the diversity felt forced. It just felt like part of our world. Edilio is Hispanic, LP is autistic, and there are so many more.

How this can be applied to writing: When creating diverse characters let their identities be so much a part of them it's hard to see them as anyone different. Do what you feel is right for your story!

3.)  Foil Characters - Sam and Caine. Astrid and Diana. These characters have similarities but they have opposite characteristics. Sam and Astrid are a couple, so are Caine and Diana but where the former couple is healthy the latter is toxic. Sam and Caine are both leaders but they lead in very different ways. Astrid and Diana are both advisors but they advise in very different ways. And these characters butt heads in many ways because of their conflicting principles.

How this can be applied to writing: Foil characters can be very fascinating. Similar but opposites. It can make you wonder if your character had made different choices would they be like their foil?

Conclusion: If you can stick through the clunky prose, this is a must-read! 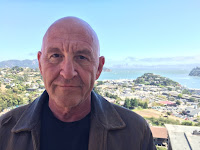 About the Author: Michael Grant was born in a manger.

Okay, no he wasn't. And that was a stupid thing to say. There was no manger. It was a log cabin. A log cabin in Los Angeles.

Or possibly a trailer.

And then while defending his country (technically it was his father, he was just an Army brat,) he moved all over the country and to France and became the incredibly well-educated, well-rounded, well-adjusted . . .

Yeah, okay that last part's a lie, too. The moving everywhere thing is true. But the sad reality is that Michael's a rootless, disconnected, indifferently-educated, sullen, obnoxious, disaffected misanthrope. With no hair. I mean seriously: look at the man's head. Do you see hair? No.

Michael Grant is married to Katherine (K.A.) Applegate. They've been together for 36 years. Which doesn't say much for Katherine's judgment does it? And they've been writing for 25ish years, sometimes as partners -- BOYFRIENDS/GIRLFRIENDS, ANIMORPHS, EVERWORLD -- and sometimes on their own.

Michael and Katherine have two kids, Jake 18 and Julia 16. (Feet tall. Get it? 16 feet tall? Ah hah hah. Yeah, okay: not funny.) Anyway, the point is that Michael Grant is the author or co-author of 150 books. Yeah: 150, including most recently the critically-acclaimed FRONT LINES, and of course the also critically acclaimed, New York Times bestselling, GONE series