A Book Review of Singularity by Steven James

Jevin Banks is searching for a killer--and answers to terrifying questions he never even thought to ask.

When his friend is murdered, illusionist Jevin Banks is determined to find out what really happened. Drawn deep into a web of conspiracy and top-secret research on human consciousness, Jevin won't stop digging until the truth is revealed. Soon he uncovers a dark secret that could change the very fabric--and future--of human life on the planet.

Based on frightening scientific realities and bristling with mystery, suspense, and intrigue, Singularity is the riveting sequel to Placebo.
Series: The Jevin Banks Experience (Book 2)
Genre: Christian Adult Fiction/Suspense
Publisher: Revell (November 5, 2013)
Page Count: 464
What I liked: This is one of the best books I've read in a long time. It's well-researched, well-paced with phenomenal characters, deep themes, and a gripping plot. From the very beginning the book was very intense and very creepy, starting out with the first victim to the villain's evil plans. Jevin search for his friend's killer is a thrilling and fascinating journey. I've read passages of it to my friends and family, because I was so obsessed with it and it is so quotable.

I fell in love with the characters even more than I did in the first book. They are all so developed and unique. Jevin is the world-traveling illusionist; Charlene is his kindhearted Christian assistant; Xavier is the humorous, conspiracy theorist special effects guy; Fiona the hacker homeschool mom; and Fiona's intelligent kids Lonnie, Donnie, Maddie, and Mandie. The bad guys are very well done as well. Akinsanya the ex-military assassin with a penchant for stitching his victims and Solomon the tattooed pimp are both terrifying.

Calista, a sociopathic twenty-something, has an excellent voice. You can tell she was young without even knowing her age at first. I forgot the book was written by a guy when it was in her POV. The book switches between many character's POVs so voice has to be strong for each character to know the difference and James pulled this off excellently. The switching POVs make the scenes even more tense.

There were many sections that made me smile or laugh. Xavier is really cute with Fiona's kids and at one point tells them a bed time story. It's adorable and it took me back to childhood. The kids joking about lighting each other on fire and when Fiona told Lonnie and Donnie to go play catch outside to get a closer look at two dirty cops surveying the house tickled me too. Also Xavier with his taser named Betty had me snickering like crazy especially the line from Page 241. Fiona's tendency to fuddle metaphors and idioms is hilarious. My favorite is, "The clot thickens." It's such a funny quirk.

The themes and philosophy in this book were astounding. They truly took me aback. The main theme is, "What is it to be human?" Since the book is about the conspiracy of a human consciousness being preserved in a machine. If that came to pass, would we be human anymore? On Page 57, the antagonist Akinsanya aka Derek mentally talks about how he is an agnostic because he feels like believing in God gives him too much constraint and not believing him Him was hopeless. But this line (Page 289) made me put down the book and think about it. My eyes watered at this gorgeous visual.


"'We live in a fallen, broken, stunning, and breathtaking world. We can tell we're from here but don't belong here. We're meant for more than this. We are dust and bones and blood and dreams, skin-covered spirits with hungry souls. We are nurses and terrorist, lovers and liars, suicide bombers and little grinning children with milk mustaches. We are both the thorns and the roses, the harlots and the children of the king.'
The paradox of life on this planet.
The paradox of the heart of human nature."

I love James' imagery. He makes such pretty pictures both in interior monologue and in description. I really enjoyed finally seeing Jevin perform a magic show and his house is really awesome. It plays a big role in the story. There is some fantastic foreshadowing and circularity (when one thing mentioned earlier comes back later on such as a theme). The climax is so exciting and intense I was gripping the book. Mind-blowing twists occur especially near the end, and the book leaves you with much to think about with this quote from page 448.


"Well," [Charlene] says," to create truly 'human machines', they'd need to be able to worship or rebel against their creators."
"You mean against us," [Jevin says.]
"Yes."
"But what kind of creator would ever be bold enough to give his creation free will and the opportunity to kill him off if they chose to?"
"The real one," she says softly. 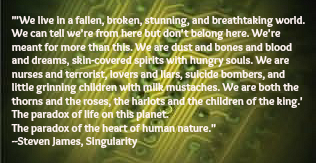 What I didn't like:  There were very few things I didn't like about this book, but nonetheless they were there. In a few areas I felt like there was too much research spiel. The first scene with Jevin felt like it had too much telling in areas in particular.

Content Cautions: I'd rate this book at PG-13. There are some scary images with reptiles and experimentation, some blood and gore with the worst near the end where a character's face is mangled. There is some implication of sexual activities since there is a sex trafficking character and Calista is a prostitute. But there are no sex scenes or swearing.

I loved this book. It was so good. ^ ^ I highly recommend reading this series.

Critically acclaimed author Steven James has written more than thirty books, including the bestselling Bower Files thriller series. He is a contributing editor to Writer's Digest and has taught writing and storytelling on three continents. Steven lives in Tennessee with his wife and three daughters. You can find him on Facebook, Twitter, Goodreads and his website.
Check out the first book, Placebo! I also have an interview with the author on the site.