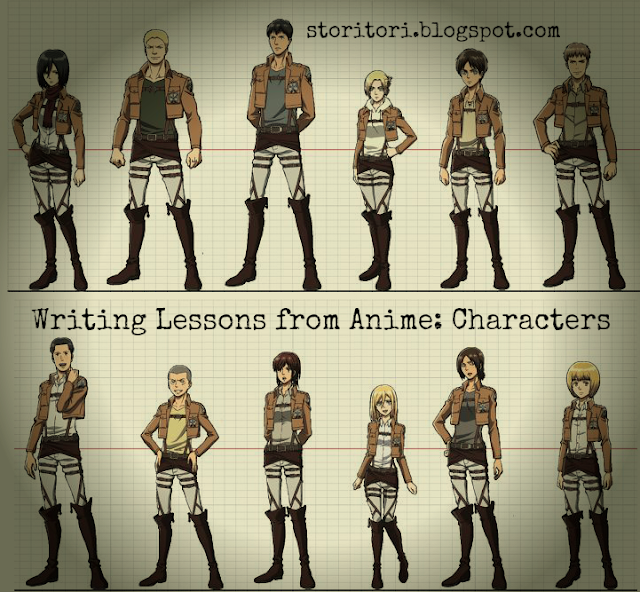 I decided to start the year with a bang and finally write a long-awaited post about anime characters. I've mentioned this in my popular post What Anime Can Teach Us About Writing, but for some reason I haven't gotten to it until now. Not sure why ... Well, without further ado, on to the post!

I have loved anime since I started watching it in my mid-teens. One of the biggest traits that struck me was the characters. They just have something about them you don't see in other forms of media. For the longest time I couldn't put my finger on what it was, but I've given it a lot of thought, and here are six things I see in anime characters we can apply to characters in novels.

1.) Outward appearance - One of the most noticeable aspects of anime characters is their appearance. Mangaka or manga artists are very creative with their designs, making each aspect of the character reflect on his/her personality and background.

For example: Naruto's (Naruto and Naruto: Shippuden) appearance and outfit expresses his personality and background very well. The bright orange jumpsuit reflects on his hyper side (in turn, when he grows up and gets more black in his outfit this shows his maturity seeping in), and his crazy, blonde hair and bright blue eyes connect to his lineage and reflect his energetic personality.

The shinobi sandals and headband show that he is a ninja, particularly a Village Hidden in the Leaves ninja by the marking on the headband. The whisker markings on his face allude to the connection to the Nine-Tailed Fox contained inside of him. From just his appearance you already know a lot about Naruto.

How it applies to writing: Your characters' appearances matter. As shown with Naruto, what a character looks like physically and what he/she wears can convey much about your character. Achieve this by amply describing them whether your main character, side characters or antagonist. Not only do you give your reader a better picture of your character physically, but it reveals many aspects about them internally. Whether your character has long or short hair, name brand clothing or clothes from Walmart, scars or no scars, and so on drops many hints on who their are.

2.) Inner appearance - The usage of thoughts in anime is one of my favorite aspects about Japanese animation. I rarely see it used in other movies or shows. Instead of just relying on dialogue, thoughts are used so you see the characters' interior monologue and true selves.

For example: Shu (Guilty Crown) is a very introverted character. He doesn't talk much which limits how well you can see his personality from the outside. He can look aloof, clumsy, and a bit dense, but through his thoughts, his intentions of desiring to please others and feeling drastically different from the rest of the world even before he receives his power become clear. By seeing into his head, we see the true him.

How it applies to writing: Everyone acts a least a little differently with the many people groups in their lives be it their family, their friends, their work, and others. Like people in real life our characters have many sides to themselves and often one they don't reveal to many others or not at all. Including this in your stories gives more humanity and life to your characters.

3.) Creativity - Anime is notorious for its creativity, and this is not only shown in the plots, but in the characters. They often have interesting powers or hairstyles or backstories that I've never seen anything remotely close to anywhere else.

For example: Kiba (Wolf's Rain) is a wolf in a post-apocalyptic world near the end of time. Wolves have been hunted to near extinction to prevent a prophecy from coming true, so now he makes himself look like a human to disguise himself. He is an orphaned wolf raised by a Native American shaman, takes much pride in his wolf heritage, and is determined to travel the world to find Paradise with some other surviving wolves. I don't know about you, but I have a hard time comparing this to anything I've read or seen.


How it applies to writing: Give your characters unique features, powers, and backstories. Think out of the box and search for ideas you've never seen before or take a unique twist on something old. You're the creator for your characters, go wild with ideas for them.

For example: Rin seems like a typical, obnoxious, and a bit dumb character, but he did a few things that made him different than others. Though he isn't the best at academics, he is a fantastic cook. The other characters joke about how that is the one thing he is really good at. He is very compassionate, especially to people or even creatures that feel like an outcast or misunderstood. In several instances during the anime, he helps encourage creatures to be better such as Kuro (the cat creature below).

Rin is also much wiser than I thought he would be. This is was the first thing and the biggest thing that made me astonished at his character. In one part of the anime, he is in class with a guy named Suguro who has been bullying him through out the school year. Sugoro dares him to come fight a captured demon inside a pit nearby while the teacher isn't looking. I expected Rin to do it and get in trouble like I've seen in most similar situations, but instead he refuses, because he knows he could get in trouble or even killed. Then saves Suguro from the demon. This unexpected action of restraint is what really made me fall in love with the character.


How it applies to writing: Give your characters unique features, break cliches, and let them do the unexpected. Not only does this make them standout among the crowd, but it makes your character more human. Everyone is different so should your characters be.

5.) Expressiveness - Everyone expresses themselves differently. This is especially true with the characters in anime. Anime does an awesome, if not hilarious job showing expressions.

For example: Ed (Fullmetal Alchemist and Fullmetal Alchemist: Brotherhood (the better one)) is very expressive. When he is happy, sad or mad, he is not afraid to show it. But there are things that particularly get up his grill such as being called short or his younger, taller brother, Al, being confused for him--because Ed is short. On the other hand, Winry is generally more composed and subtle--unless Ed gets on her nerves. But she gets extremely excited when she sees any cool automail.

Certain things can set off a character that won't set off another like something that makes them remember a painful event in their pasts or perhaps it's just something that's just plain irritating. How each expression is conveyed is different too, some people yell when their mad, while others just cry and their cheeks burn.

6.) Voice - Anime voices are very unique, not just in tone, but how they word their sentences and if they have catch phrases. How a character talks tells a lot about his/her personality.

For example: Kirito (Sword Art Online) is very good with computers and game terminology, but not so good with being social due to not having many friends in the real world. He has a soothing and calm voice. His famous catch phrase "Link start!" is his most well known line. Yoru (from Shugo Chara) says "nya" at the end of his sentences to accentuate his cat-like self and talks like a little kid, since "nya" is the Japanese equivalent for meow.

How it applies to writing: The best way to know if your character has a significant enough voice is if you can pick out his/her voice among a bunch of other lines that have no dialogue tags or actions beats. You want your character's voice to be distinctive. Do they have a large vocabulary? Do they have accent? Do they have unique slang words or phrases unique to them?

Conclusion - Anime characters have a lot of amazing characteristics, but so can yours. Be creative, look at your character from the inside out, and keep them human(ish. Depending on if yours is an alien or fairy or something ;) ). Happy writing!

Have you applied similar things to your characters? What are some of your favorite characters (anime or others) that show some of these features well?

You may also like:
What Anime Can Teach Us About Writing
Writing Lessons from Anime: Interior Monologue and Thoughts
MomoCon and Fans!
Tea Tuesday: I've Got the Moves Like Jeager
End of the Year Update 2014