A Book Review of Blood for Blood by Ben Wolf


What if a vampire got saved?

Calandra, an evangelist's daughter, is amazed to watch as Raven, a century-old vampire, develops faith. As Raven ceases to drink blood and becomes more human with each passing day, Calandra cannot deny her growing attraction to him even though she is being courted by another man.

Raven's newfound salvation is both a relief and a burden, as he encounters multiple vampire taboos and must overcome them. Just when Raven begins to get the hang of his new lifestyle, Calandra is attacked by bandits.

Will Raven revert to his old vampiric ways to save Calandra from certain death? Or will he rely on his faith in God to help him ransom Calandra from a new brand of evil more horrifying than he ever was as a vampire?

Genre: Adult Fantasy
Publisher: Splickety Publishing Group; 1 edition (October 30, 2014)
Page Count: 395 pages
What I liked: Honestly, I was really skeptical about this book. I'm not a vampire fan in the slightest.  I don't do Twilight or Vampire Diaries. I've always thought vampires are creepy, but I know the author of Blood for Blood and I thought I'd give it a shot. He was kind enough to give me a review copy (Thank you, Ben!), and I found myself pleasantly surprised.

The opening is very exciting. It definitely draws you in. The prose flows well for the most part and I like that the book is set in the 1800s as opposed to the common modern. There is a lot of vampire lore incorporated like vampires have an aversion to holy symbols, garlic, sunlight, wooden stakes, and they can't cross moving bodies of water or can't come into a house without being invited. The vampires have the abilities to seduce, transform into a variety of things and super strength which are all pretty cool and make the bad vampires formidable. I especially like that vampirism is portrayed as something evil as opposed to something someone wants to become like in Twilight. Drinking blood is not something to glorify (Leviticus 17:12).

I also enjoyed the cast of characters. The main character Raven is a vampire and hates it. Not in an Edward way like, "I hate it but I'm still going to seduce you into loving me like I am anyway." But an honest to goodness knowing that it is wrong. Despite his distrustful nature, he has a kind and noble spirit that comes out as the book goes and his heart starts to change after being saved. You really care for him as the story goes especially when you learn more about his intriguing and tragic backstory.

I like the Zambini family. It is a big family and reminded me of growing up around large families. I don't see them used much in books. Luco Zambini is an evangelical preacher and portrays Christianity in a realistic and non-cheesy way which was a great relief to me. The love interest Calandra is kind and sweet, but near the end she does something that made me temporarily hate her and she had to gain my liking again. Still, I liked her relationship with Raven. Some of the side characters, Marshal, his deputies, and Harry's bandits, were interesting, but they weren't expanded on too much.

The villains are definitely formidable. I like that there was one that could possibly be redeemed and another that was just pure evil. Garrett is a jerk and Harry is well scary. I almost liked Garrett a few times, but no I hated him by the end which is a good thing.

Some comedy between the Marshal and his boys and even Harry and his bandits made me laugh. What made me laugh the most was when Raven described Calandra as having "curves that could derail a steam engine."

There we many unique themes in this book. I liked how Raven's blood drinking was compared to Garrett's former alcohol addiction. It showed some neat parallels about battling addiction. I also liked the visualization of sanctification shown in the story as Raven changes from his vampiric ways. I don't see sanctification portrayed so clearly in many Christian stories.

Many times were very intense especially in the climax. The mega-villain reminded me a bit a superhero flick. I loved the circularity with earlier events and the triumph the characters have. It's uplifting and inspiring. There were many twists that really surprised me. The ending is very satisfying and I wish there was a sequel. 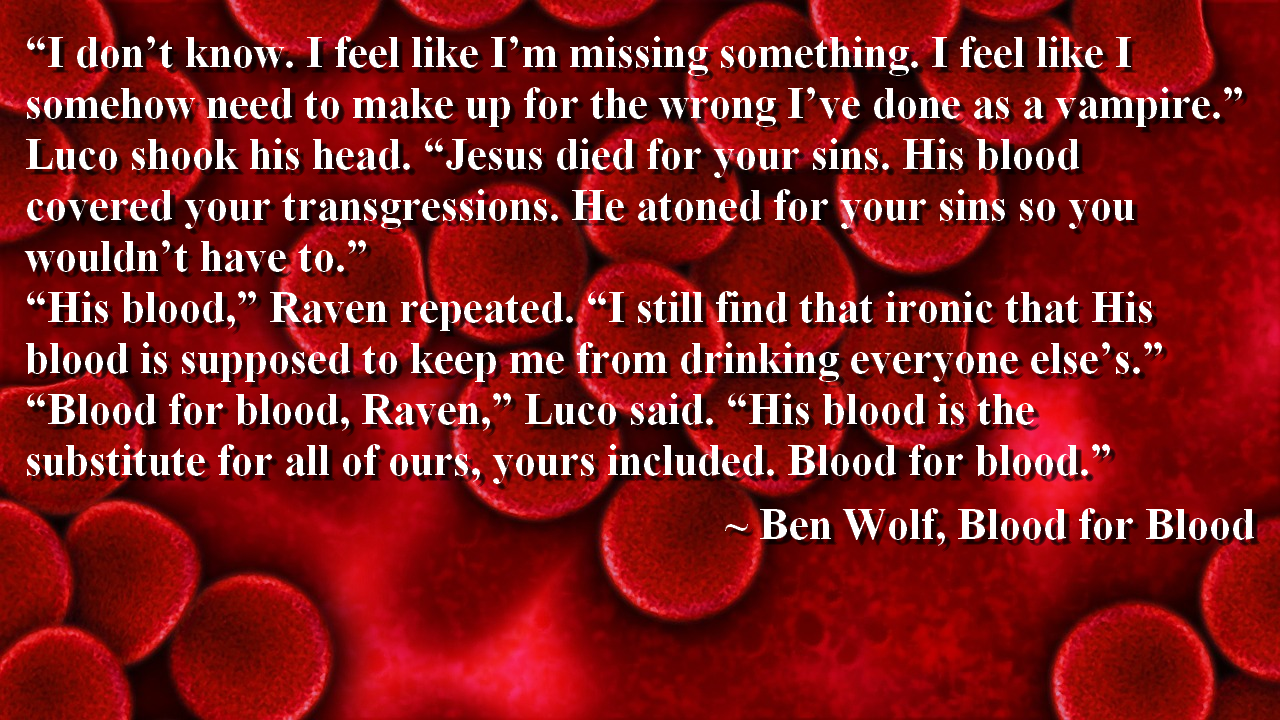 What I didn't like: There were a few writing technique errors such as some telling and action and reaction, but nothing too glaring. I feel like the hook could have been better. I didn't like "hell" used so much used in a Christian novel. There were a few scenes where I felt should have evoked more emotion from me, but they didn't. Also one of the characters said "too graphic" and it felt out of time period to me.

My biggest gripe was I felt like there were too many POV switches. I couldn't connect as deeply as I felt I should have with the main characters. Some of the voices weren't distinctive enough and I got confused sometimes. I've read books like Steven James' Placebo where multiple POV switches were done very well, but I felt there were a few too many in this book.

Content Cautions: Characteristic to vampire media it does have some gore including people being shot, stabbed through with stakes, skewered on a branch, blood drained from them, and their heads chopped off. There is a rotting corpse at one point that is pretty nasty. Some of the characters drink (mostly baddies). Hell is used profusely as in, "Go to hell." for the most part. A character attempts to rape another character, but doesn't get too far, and there is some kissing.

Overall this was a very creative, thrilling tale and the best vampire story I've read or watched. 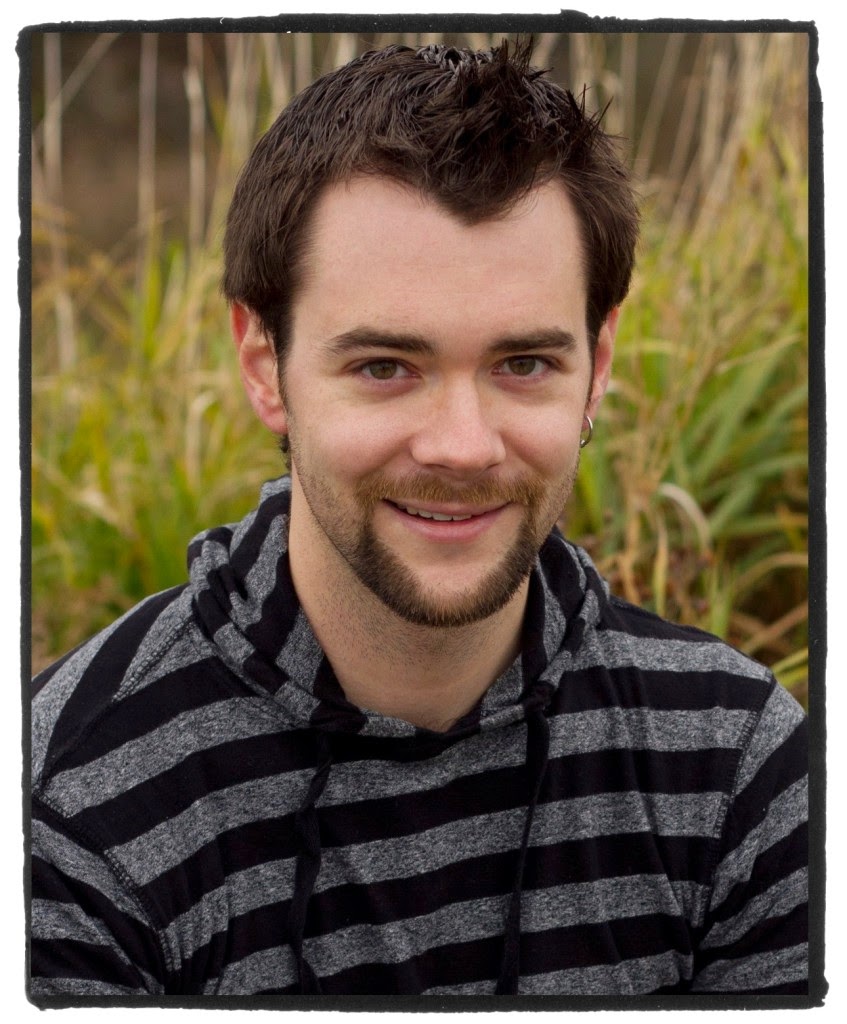 In 7th grade Ben Wolf saw the movie Congo on TV. It was so bad that he wrote a parody of it that was set in Australia and featured murderous kangaroos instead of gorillas. So began his writing career.As someone who knows how hectic life can get, Ben founded Splickety Publishing Group to meet the needs of busy folks like him: people who appreciate great fiction but don’t have a lot of time to read. Ben has written six action/adventure novels (five of which are good) and has multiple other projects in the works. His first novel, Blood for Blood, debuted in September of 2014 and has been characterized as "bold...with nonstop tension" and "hard to put down." It examines the question of whether or not God can redeem anyone—even a vampire. Check out his website at www.benwolf.com, Facebook, and Twitter.