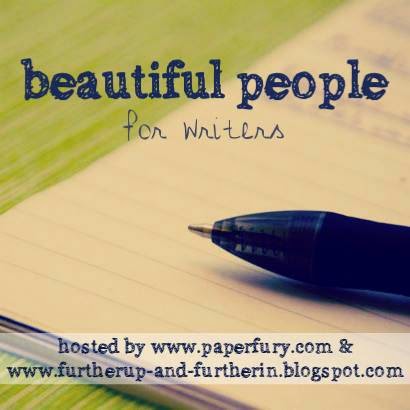 This month's post is really sprucing up my Valentine's Day. Since I'm single I can at least squee over my character relationships lol. Today we're going to talk about Matt and Ingrid from Subsapien. ^ ^ If you'd like to participate in this link-up yourself, check out either Paperfury or Further Up and Further In to see how. Here we go!

1. How long have they been a couple?
They've had a crush on each other for years now, but not until a few months ago have they gotten together officially. It was a long time coming. Their friends said, "Finally!" when they made it official.

2. How did they first meet?
Matt and Ingrid are both laboratory experiments in a lab about eighty years into the future. While Matt was seven and in gym training his physical abilities, he spotted Ingrid being beaten by one of the guards of the lab. He ran to her aid and thrust himself over her to protect her, taking her beatings for her.

4. What do they do that most annoys each other?
Ingrid sometimes is annoyed when she feels like she's put in the back seat by Matt, because Matt has to attend to his brother Bryce. She tries to be understanding, because Bryce is Matt's only family, but she can't help feeling a little irritated when Matt drops everything including her for Bryce.

Ingrid always tries to find the good in people and sometimes Matt feels like that puts her in danger with her child-like trust. He gets annoyed that she's jeopardizing her safety being too friendly.

5. Are their personalities opposite or similar?
They have similar personalities. Matt is a little more artistic than Ingrid is, but they both have kind dispositions and servants' hearts. He tends to be a little more fiery than Ingrid, a trait he and his brother Bryce share. Though Matt is slower to anger, Ingrid still needs to be his calm at times.

6. How would their lives be different without each other?
Matt and Ingrid have been each other's support especially when Bryce's older brother was sent away for punishment for eight months. They have helped each other get through many hardships and I think Matt would have become a more bitter person if it wasn't for Ingrid.

7. Are they ever embarrassed of each other?
Matt used to be a bit embarrassed of Ingrid's faith in God. He used to think it was a silly fairy tale that she needed to grow out of, until she led him to Christ. Ingrid would sometimes get embarrassed if Matt did something silly in front of other people, but nothing detrimental.

8. Does anyone disapprove of their relationship?
The scientists that own them don't entirely approve of the cross-species relationship. They will sometimes use them against one another to get them to do what they want or to just get an emotional reaction for experimentation.

9. Do they see their relationship as long-term/leading to marriage?
Yes, definitely. They are both very committed to each other.

10. If they could plan the “perfect outing” together, where would they go?
Probably a concert or a movie. Matt and Ingrid both love music. Matt plays the guitar and they'll sing duets sometimes.

Well, that's Matt and Ingrid. They're so cute. ^ ^ If you'd like to know a little more about them, check out their character interviews. Here's Matt's and here's Ingrid's. Thanks for reading!


What do you think of Mingrid? Did you do Beautiful People this month? Show me your links in the comments!