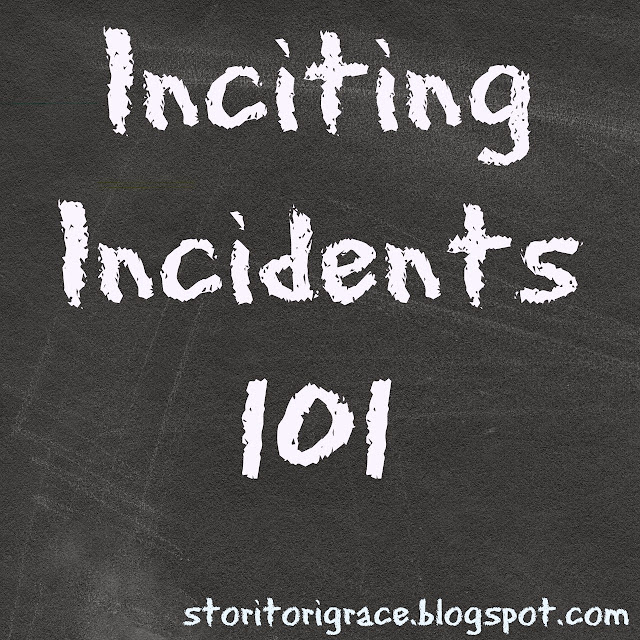 Inciting Incidents or the Disaster is the part of your story where the plot really gets started, like in Star Wars: Episode IV when the Storm Troopers killed Luke's aunt and uncle, forcing him to go on his journey on becoming a Jedi. It is a fundamental part of a novel. While at a conference a while back, I discovered there are a few more tricks to this important part of your novel than most people have pointed out.

1.) The Character Has a Choice - In the Hunger Games, the inciting incident is when Prim is picked at the Reaping and Katniss volunteers. Katniss had a choice whether or not she would speak up, but she chose to go into the Games, which is one reason I love her so much. I glass up at that part every time. Her choice is what started the story.

2.) The Character Doesn't Have a Choice - On the other hand, in the Lord of the Rings: The Fellowship of the Ring, Gandalf warns Frodo of the coming of the Nazgul. Frodo had no choice but to flee or he'd be Nazgul bait. This is when the story started and Frodo had to go on the journey.

3.) The Character Causes the Incident - Sometimes the character himself will make the inciting incident happen. In How to Train Your Dragon, Hiccup gets the story started when he shoots down Toothless with his machine. Because he did that, he meets Toothless, and their friendship begins, thus starting the story.

4.) Outside Forces Cause the Incident - Then at other times, outside circumstances cause the story to start. In The Hobbit: The Unexpected Journey, Gandalf, someone not the main character, volunteers Bilbo for the position as burglar for the dwarves and this gets the plot going.

Bonus: Combination of 2 and 4 - Now we get to a combination of two of those inciting incidents. In Attack on Titan, Titans (outside forces) murder Erin's mother, giving him no choice but to flee his home. This in turn begins his determination to eliminate the vile Titans to avenge his mother and save humanity from extinction.

Every story has an inciting incident. The plot can't start without one! Try picking out the inciting incidents while watching movies and reading books to research. When plotting out your story, keep these elements in mind. I hope this helps you pick the best incident to jump start your story!

You may also like:
Reeling In Your Reader: A Guest Post by Lauren Claire
Six Tips For Line Editing
Twelve Rookie Writer Mistakes and How to Mend Them
Writing Humor Into Your Story
A Dragon and Roadmapping Your Tales