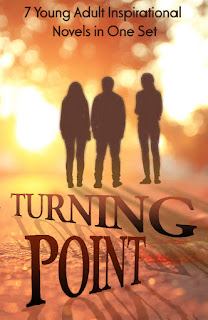 Hey, all! For today's Fun Friday I'm here to tell you about this awesome project perfect for your summer reading needs. For a limited time, the Turning Point collection is featuring seven full length young adult novels for only 99 cents available at Amazon, Barnes & Noble, iTunes, and Kobo! You heard right! 99 cents! I've already picked up my copy. I can't wait to read some of these!

Here are the titles in the set! 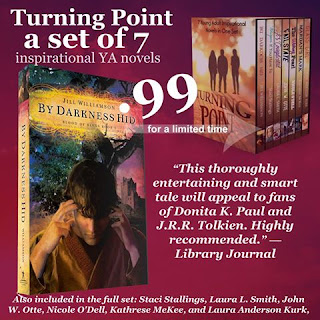 By Darkness Hid by Jill Williamson
Given the chance to train as a squire, kitchen servant Achan Cham hopes to pull himself out of his pitiful life and become a Kingsguard Knight. When Achan’s owner learns of his training, he forces Achan to spar with the Crown Prince–more of a death sentence than an honor. Meanwhile, strange voices in Achan’s head cause him to fear he’s going mad. While escorting the prince to a council presentation, their convoy is attacked. Achan is wounded and arrested, but escapes from prison–only to discover a secret about himself he never believed possible.

Check out my interview with the author! 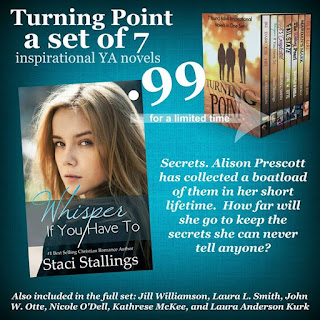 Whisper If You Have To by Staci Stallings Secrets
Alison Prescott has collected a boatload of them in her short lifetime. Moving to a new school in a new town was supposed to fix everything; however, when she meets a new set of friends, keeping those secrets might just ruin everything including her fledgling relationship with the school’s basketball star, Chad Dourozette. How far will Allison go to keep the secrets she can never tell anyone? 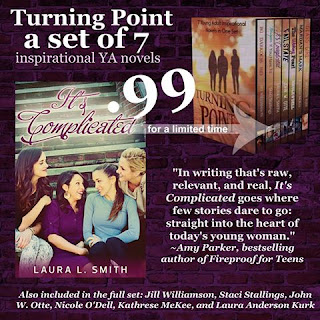 It’s Complicated by Laura L. Smith
There’s a reason Facebook has the Status Update, It’s Complicated. Follow four college roommates, Claire, Palmer, Hannah, and Kat as they maneuver crushes, confusion, and the crisis when pushy boys go too far. Complicated as it is, these four friends will pull through, guided by the strength of their friendship and the power of God’s love. 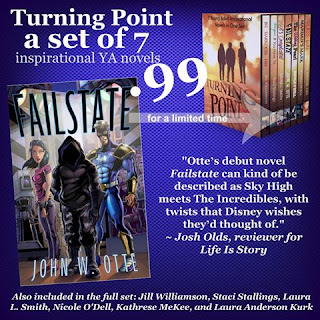 Failstate by John W. Otte
A fledgling teenage superhero competes on a reality TV show for a government vigilante license. When one of his competitors is murdered, Failstate sets out on a quest to avenge her death. But will his superpowered lunk of a big brother ruin everything?

Check out my review! 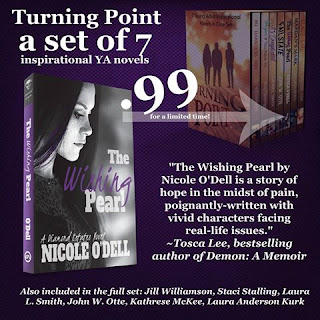 The Wishing Pearl by Nicole O’Dell
Sixteen-year-old Olivia Mansfield can’t wait to escape the confines of her home, which promises nothing but perpetual torment and abuse from her stepfather. When poor choices lead her to the brink of a complete breakdown, Olivia comes to a crossroads. Will she find the path to ultimate hope and healing that her heart longs for? 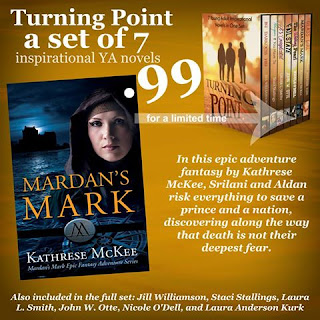 Mardan’s Mark by Kathrese McKee
Abducted by pirates and taken behind enemy lines across the Great Gulf, Princess Srilani is determined to save her sisters and younger brother, the crown prince, from captivity. She convinces their caretaker, Aldan, and his brother slaves to share the perilous journey home. This ragtag group of unlikely heroes sets out on a quest — pursued by cutthroat pirates, merciless priests, and marauding soldiers — to return the heir to his kingdom before war breaks out. In this epic adventure fantasy, Srilani and Aldan risk everything to save a prince and a nation, discovering along the way that death is not their deepest fear. 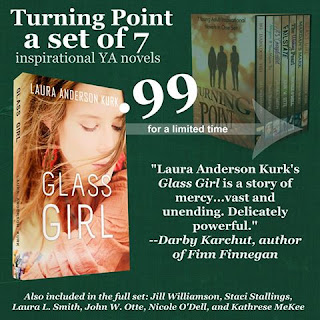 Glass Girl by Laura Anderson
Kurk After her older brother Wyatt is killed in a jealousy-fueled incident and her mother disappears, Meg Kavanagh decides surviving is easy—it’s living that takes guts. She believes she’s to blame for Wyatt’s death, but when Henry Whitmire steps in with a secret, will Meg forgive herself enough to accept the good things in life like the rush of first love and the power of mercy?

These are some pretty awesome titles, huh? Get reading! :D

Purchase your copy on Amazon! 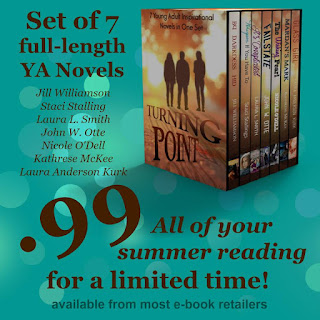 Have you read any of these books before? Which one is your favorite? Which one do you want to read the most?