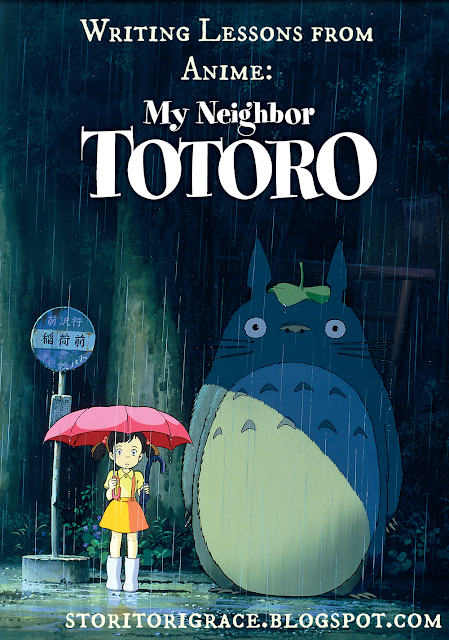 Though I didn't grow up with this film like many people have I've been touched by this Japanese Narnia story (Don't believe me? Mei = Lucy Pevensie). I've watched this film three times now and cried each time. Just recently I watched My Neighbor Totoro with my best friend and during this watch, I realized there are some great writing aspects to be gleaned from this movie.

1.) There Was No Info Dumping - In many kids films, it seems as if the writers think the audience is solely children and not very bright children, at that so often lazy writing is implicated. One of the biggest writing sins committed in those situations is info dumping which is when the writers spell out the situation for the viewers/readers. This was done a lot in the beginning of Big Hero 6. I enjoyed the film later on, but at first the contrived dialogue between Hiro and his brother was just killing me.

My Neighbor Totoro didn't do this. In fact, you didn't know completely what was going on until nearly a third of the way into the film. Instead of  taking the easy route, the writers hinted at the characters' situation as the film went, allowing this intrigue of the unknown propel the story. This film isn't intense. In fact, it's pretty mild, but because you didn't know everything from the beginning, you wanted to keep watching.

How this can be applied to writing: Your readers aren't stupid and holding back information isn't a bad thing. Instead of telling your readers about the background of the characters or other details either in a long swath of narration or having your character conveniently feel the need to spiel about their lives, drop small questions in phrases, interior monologue, and even settings and let your reader put it together. It's funner this way and it's just good writing.

2.) The Movie Started in a Great Place - I could see this film starting in many places. One could have been back before Satsuki and her family ever moved and shown their mother sick or another after they moved into the house, but the writers began where they did because it was the closest to the inciting incident while still giving some background to the story. This gave us time to grow attached to Satsuki and Mei and their awesome dad, before the mysterious Totoros came into play.

How this can be applied to writing: Where you start your story is essential to drawing in your readers. I've changed my beginnings so many times to find just the right spot. Choosing the right starting place can make or break a book. Look for a place close to the inciting incident, but far enough so you can learn about the character before throwing them into the action. Before you put your characters in danger whether it be emotionally or physically, your readers must care.

3.) They Captured the Nature of a Child - These screenwriters did their research. I've often observed in movies that children move very similar to adults and sometimes think similarly to adults as well. I like that in Totoro, Mei and Satsuki act like children, simplistic yet natural and it doing so it captures the voice of a child and you feel with them throughout the story not like an overseeing adult. I loved how Mei tripped while she was running and copied Satsuki.

How this can be applied to writing: One extremely important part of writing especially in first person and third person limited is really getting into the head of a character. This is called voice which is making the reader feel like he or she is seeing through the eyes of that character like describing things how the characters would or portraying the character's thoughts and movements accurately. For example the thoughts of a soldier would be very different than the thoughts of a doctor or high school student.


My Neighbor Totoro is an adorable film for adults, teens, and children. I would strongly recommend giving this movie a watch not just for its great writing, but also for this heartwarming story about two sisters and a trio of forest spirits.

Have you seen this movie? Who's your favorite character? Are there any writing learning points I missed?