So Your Character is Homeschooled ... 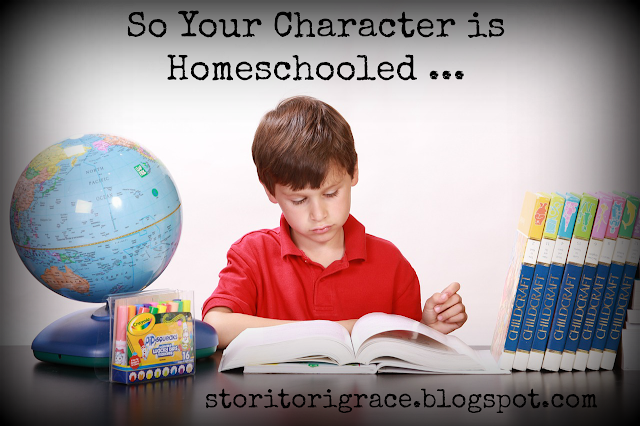 2.) They're Not All Uncultured - Just because a kid is homeschooled doesn't mean they don't listen to current music or watch popular movies. They may watch more lesser known shows because they have more time to, but that doesn't mean they don't watch any current movies at all. Growing up I got the latest Disney animated movie for my birthday every year. In fact, some of my public school friends would come over to watch it with me.

3.) There are Many Reasons Why Homeschoolers Don't Public School - Parents choose to homeschool for many reasons whether it be special needs or they want control of their kids schooling or they travel or move a lot or they don't want their kids exposed to sex, drugs, and alcohol at a young age. I have a friend who moved internationally with her family because of her dad being in the military. It would be really tough to keep changing schools that way, so her parents decided to homeschool her to make it easier.

4.) They're not all Christians - Though I know a lot of homeschoolers who are Christians, many are not.

6.) The Schooling is Similar to Public Schooling but More Flexible - Homeschooling is similar to public schooling as in we had to learn all of the different subjects and do standardized tests every few years so the government knows how we're doing. For us our parents dictated when our school hours are which were usually on the same days as public schoolers but we could do them in much less time. We could double up on school so we could do something special like staying at a friends or going on a vacation in the middle of the school year. This gave me much more time as a kid for art and just playing outside and being a kid.

Some kids do hybrid schooling where they take some classes at a school or co-op and others at home, possibly because the parents are having difficulty getting the kid to learn that particular subject or it's a subject that requires more skill like engineering.

Media that portrayed this right:
There isn't really much media that comes to mind that portrays homeschooling correctly. The only one I can think of is when Billie and Bonnie are homeschooled in the Dragons in Our Midst series so they may keep their powers more easily hidden.

I hope this post helps you better write a homeschooled character and if you're not writing one this may inspire you do so. It can have a lot of advantages and be a nice change to the public school setting. I know I wished there were more books about homeschoolers as a kid.

And if this post didn't convince you about the nature of homeschoolers check out this video:

Are you writing a homeschooled character? Are there any questions I didn't answer? Are you a homeschooler and have a few things to add?