You Deserve to Be Inspired Contest Entry: A Different Journey 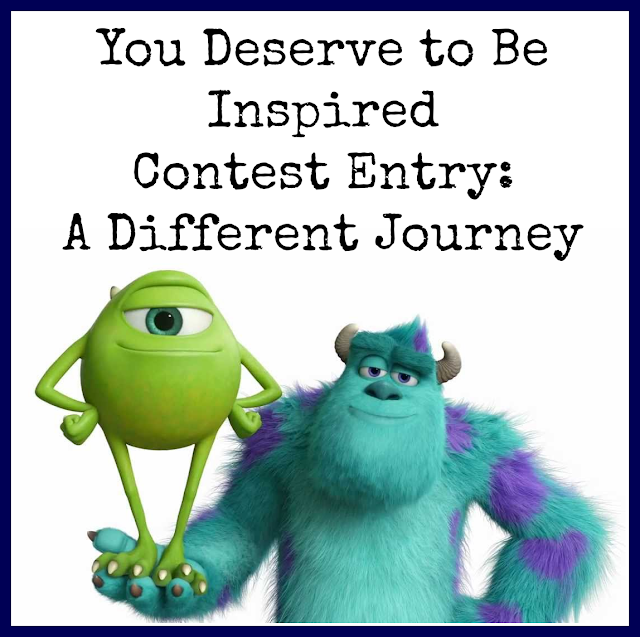 Positive Writer is hosting a new contest called You Deserve to Be Inspired where the participants write a blog post with their inspirational story. For more details you can check out the post since the deadline isn't until March 1st!

Everyone's journey to reach their goals is different, not every path to success has to be the same. When I watched Monsters University, I was surprised that instead of Sully and Mike graduating with bachelor's degrees in scaring, they took a different path and worked their way up to Top Scarers. It really inspired me that hard work paves the way to reaching goals.

From when I dictated my first story when I was a toddler to creating detailed plots in imagination games to writing down stories in my school notes, I've had a passion for stories. When I was eleven I wrote a horribly cliché fantasy manuscript and in my mid-teens my writing wasn't too much better. I only knew what I had learned from curriculum writing books and experience.

After reading a novel by Bryan Davis, I fell in love with his writing style, so much so I knew I had to contact him. He encouraged me to attend the Florida Christian Writer's Conference. After much asking, my parents let me go. I was overwhelmed by more writing craft and industry knowledge than I'd even heard. I found out that I could pitch my work to professionals to actually get published. I knew I wanted to be a published novelist.


For the next four years I typed away at manuscripts and attended this conference yearly, gleaning more knowledge each time and eventually starting to submit to publishers. However, still family and friends jerked me in all directions as to whether this should be my main career. At twenty, a close friend showed me this quote illustrated on Zen Pencils. That’s when I decided that I want to be a fulltime author.

Most people, and particularly kids, don't realize that they are in control of their lives and they're the ones that are going to make the decisions and they're the ones that are going to make it one way or another. Usually adolescence is a time when kids feel that the world is doing it to them. Whether it's their parents doing it to them or their teachers doing it to them or their friends doing it to them and that they are the victim in all of this. Somewhere in here you have to learn that you're not the victim. But instead, you're the one who's doing it. That moment is sometimes a long, slow realization or sometimes it's the turning on a light switch. All of a sudden you realize that you are the person who has control of your life.  ~ Jim Henson

I decided to skip college to focus on writing. I blogged, freelance edited, wrote over a half a million words in my manuscripts, and received rejections for my manuscripts. I followed as much good writing advice as I could. I participated in any writing contest I could find, many of which I got close to winning but eventually lost. I especially entered the writing awards competition for the conference yearly—and each time never made it.

In 2014, I won the Young Writer of the Year Award. I finally started feeling like I was actually starting be a good writer. Later, I got a volunteer editing position on a website.

However, the year went on and, I still hadn't gotten any acceptances for my novels, my true passion. I became discouraged. Days before I would be going to the last Florida Christian Writers Conference I could afford for a while, I got down on my face and prayed to God for Him to somehow give me a sign that I was doing the right thing, that all of these countless hours of dedication weren't for nothing.

At the awards banquet, Rebeca Seitz of Believers Trust, a Christian, non-profit company devoted to helping writers, walked onto the stage to announce the winner of the Beyond the Steeple Award which comes with a $200 prize. I had entered my novel into this contest last minute. Rebeca told herself she'd pick the story for the winner that she couldn't stop thinking about. She said one key factor to the entry she chose was that it reminded her of Once Upon a Time.

My mouth dropped open. My novel Red Hood is a fairy tale retelling, but someone else could have written one.

Then Rebeca said it was based on Little Red Riding Hood.

I froze. That was my book.

Rebeca said, "And the award goes to Victoria Grace Howell for Red Hood!"

I doubled over and covered my mouth. Tears welled up in my eyes, and I hyperventilated. I stumbled onto the stage and Rebeca handed me this giant frame with the award and a check.


After a short acceptance speech, I returned to my seat, getting high-fives from my friends along the way. Someone tapped my shoulder. I turned, and one of the editors I spoke to earlier that day handed me a business card reading, "Congratulations. Consider the award confirmation from God. Go forth and WRITE!" I didn't tell this man about my struggle. I was floored. 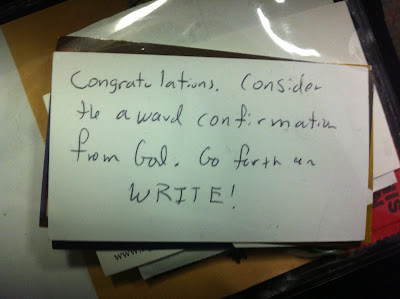 The following year I was published in a flash fiction magazine. A month after that, I got accepted as a paid staff writer for Geekdom House. Later that year, I became a social media manager for Splickety: Havok Magazine. And then at the end of 2016, my article became the featured piece for Area of Effect Magazine.

I'm not there yet in my journey to being a published novelist, but like Mike and Sully I'm working my way up to being one. First a blogger then an editor then a magazine author then a staff writer then a social media manager and I’m determined for the next step to be a novelist.

Email ThisBlogThis!Share to TwitterShare to FacebookShare to Pinterest
Labels: Contest