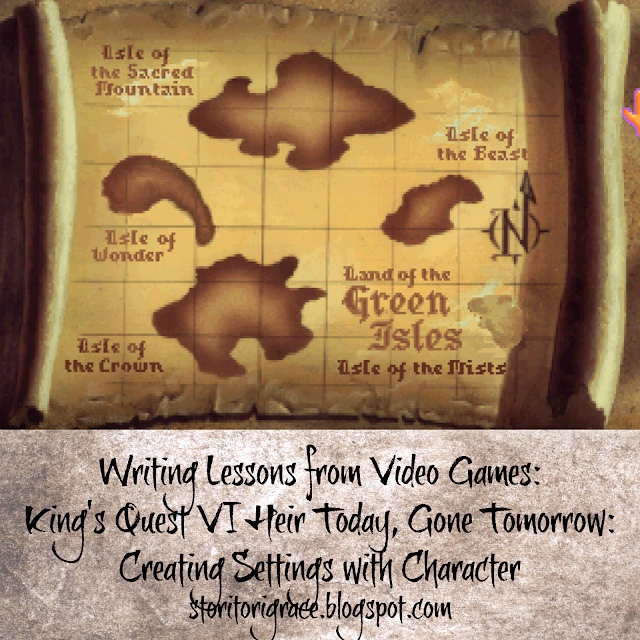 King's Quest VI is my favorite game of the King's Quest series. It has top notch voice actors, an intense plot, and my favorite setting of the games: The Land of the Green Isles. This setting is explored again in King's Quest IX: The Silver Lining as well! It's a realm that features five islands with five distinct personalities: The Isle of the Crown (where the Royal Family and most of the populace live), The Isle of the Beast (an island where a terrifying beast and his castle live), The Isle of the Sacred Mountain (an island where the mysterious Winged Ones live guarding the Oracle), the Isle of Wonder (a quirky island ruled by chess pieces), and the Isle of Mists (an island occupied by druids). I believe this setting has a lot to teach us about making an unique and engaging place for our characters to have their adventures!


1.) A Setting with Mystery -  The Land of the Green Isles is difficult to find. Not many people have heard of it. Strong currents and treacherous reefs make travel difficult between islands. It is also shrouded in mystery because it located near the end of this fantasy world, closest to the world beyond the living. Legend says islands tend to come and go.


How this applies to writing: Settings can have backstory just like characters. Immediately after hearing about all of the mystery about the Isles in the game, I wanted to hear more about this enchanting land. It drew me in. A setting can have its own kind of mystery that can make readers want to know more about it and thus keep turning the pages.


2.) A Mishmash Setting - The funnest island of the game is one loosely based on Alice in Wonderland and that is the Isle of Wonder. This island is ruled by the Red Queen and White Queen in chessboard land, who constantly fight with each other and have a tendency to behead whoever angers them. This island also features a wide variety of flora and fauna, most of which have minds of their own such as a barking Dogwood tree, biting Snap Dragons, bashful Wallflowers, snoring oysters in little beds, a seductive black widow spider, and crying Baby's Tears. If the island wasn't quirky enough, there's a bookworm with mounds of books who hangs out with Dipthong, Oxymoron, and Dangling Participle, personified grammatical principles. 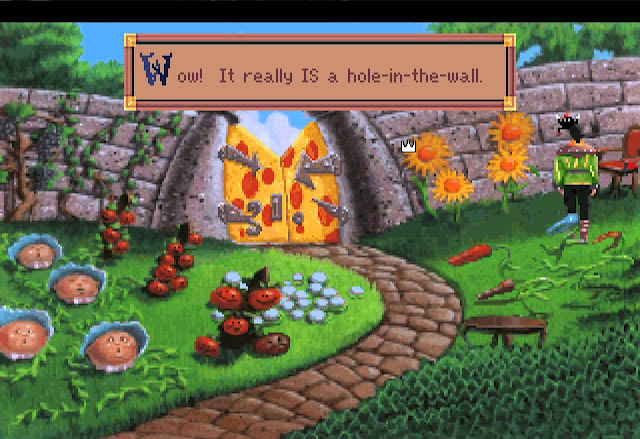 How this applies to writing: The Isle of Wonder is a crazy mishmash of features, but it works so well for the island. It's unforgettable and there's definitely no place like this island. It draws ideas from Alice in Wonderland but it has enough differences to hold its own.

3.) A Twist on a Classic Setting - My favorite setting of King's Quest VI is definitely the Underworld. Why? Because the creators really took creative liberty with it and made it so memorable! This version of the Underworld is a mix of Egyptian, Greek, and Celtic mythologies. In one section of the Underworld, you can see pyramids in the background, you have to cross the River Styx in Charon's boat, and Samhain rules the Underworld. Furthermore, the ground and walls of the underworld are made of jagged rock, but also creepy sinew which really makes you feel like you're in a world very unlike that of the living. Samhain is forever robbed of movement, so in a way the sinew feels like an extension of the cursed king throughout the Underworld. 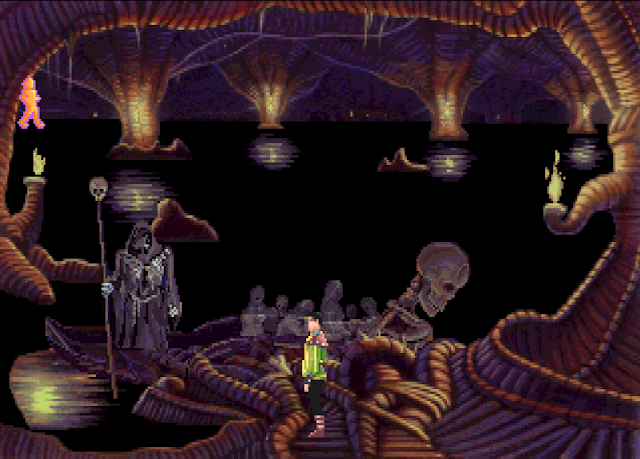 How this applies to writing: There are many settings that I'd consider "classic settings" such as the enchanted forest, the king's castle, the special powers school, the evil dark lord's lair, and the poor main character's village, but there are many ways to take these settings and make them unique. 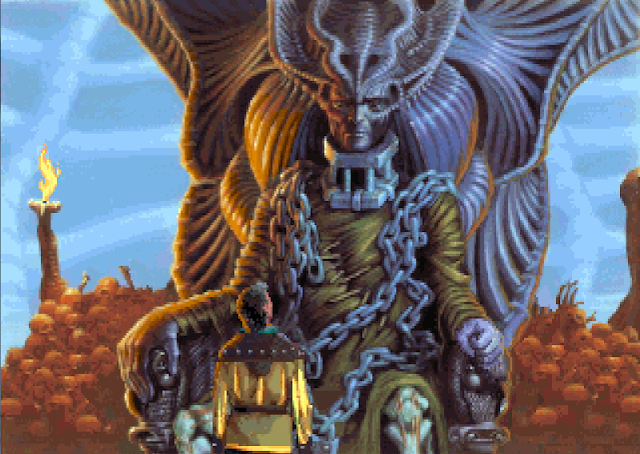 4.) Adapting a Well-Known Story to a Different Cultural Setting - The Isle of the Crown has a culture harkening to Arabian culture and on that island you meet Beauty from Beauty and the Beast and you have to help her find the beast. I love how the manor she lives in has the Arabic architecture and how she wears a veil. The Beast's isle is more traditionally French, but it's cool to see Beauty come from an Arabic setting. 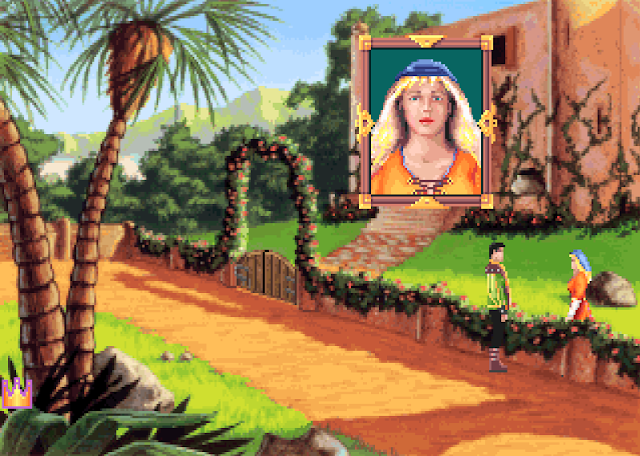 How this applies to writing: Have thought of you thought of taking a fairy tale or another well-known story and changing the setting? There's so many ways that this can take an oft-told story and turn it into something sensational. Take the Lunar Chronicles by Marissa Meyer for example! 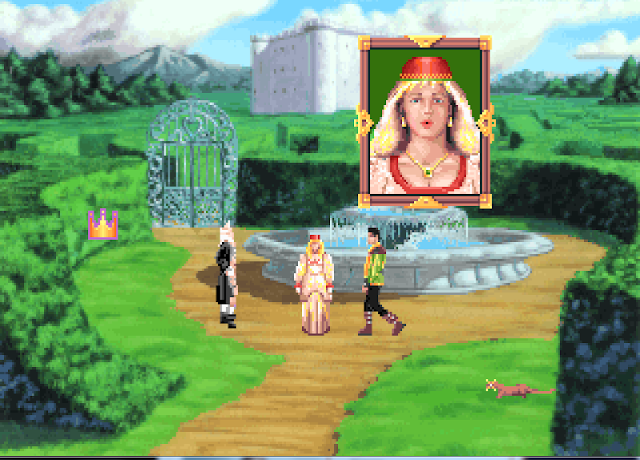 5.) Every Screen is Important to the Game - In this point and click game, you move from screen to screen to play. Each screen is a different setting and each screen has important clues to the game even cutscene screens! Roberta Williams (creator of the King's Quest series) made sure that all of the settings she introduced became important to the game. In past games, some of the screens you went to were just filler screens and you never did anything important in them, but in this game, every screen had something important, some item you needed to complete your quest. 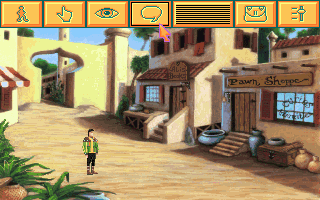 In Ali's Bookshop, you acquire a boring book to read a clam to sleep to get a pearl to get your ring back from the Pawn Shop owner. In the swamp on the Isle of Wonder, you instigate a fight between Bump-on-a-Log and Stick-in-the-Mud with Rotten Tomato to acquire the swamp ooze for a spell. In the cutscenes between Abdul and Shamir you see what Shamir's lamp looks like so you can then find a replica later so you can stop Shamir from killing you. 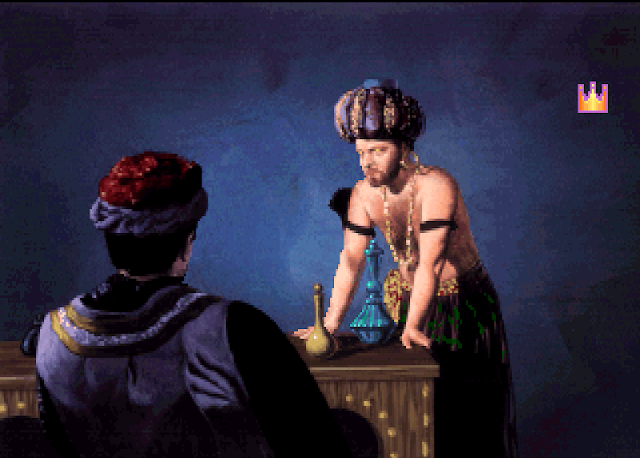 How this applies to writing: A great setting is awesome to have, but you don't want to leave your readers hanging with loose ends or "useless screens." When I was reading the Inkheart series by Cornelia Funke, I was fascinated with all of the different elements of her story. The setting of Inkheart was fantastic, but I felt so disappointed when a lot of these elements weren't explored. I wanted to know more about Night-Mares, glassmen, brownies, and white women, but I never got enough to satisfy. When you introduce a setting element to your story, expand it enough to satisfaction or leave it out. 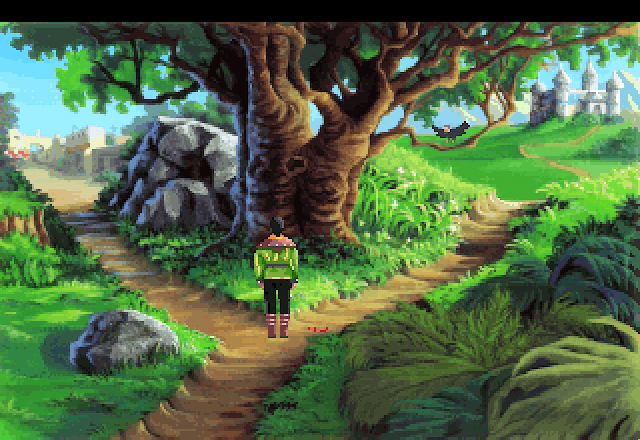 Conclusion - Settings are so fun, so give them personality like Narnia, Middle Earth, and Hyrule. There's a reason that we remember these places and it's because these places are like characters in of themselves. 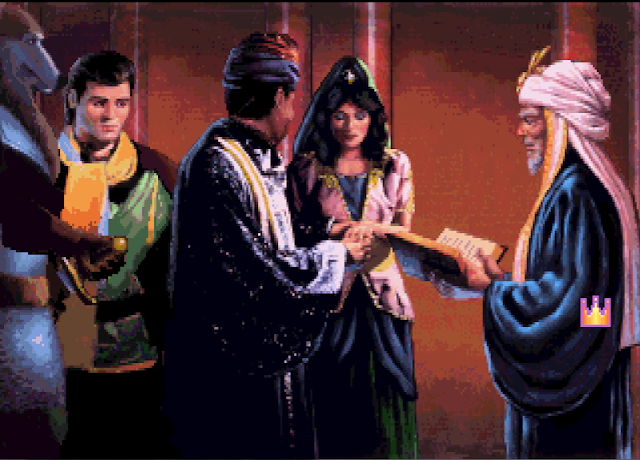 Have you played King's Quest VI: Heir Today Gone Tomorrow? Have you noticed these writing aspects? What video games have you noticed have good writing? Let's geek out together!