A Book Review of Out of the Silent Planet by C.S. Lewis

The first book in C. S. Lewis's acclaimed Space Trilogy, which continues with Perelandra and That Hideous Strength, Out of the Silent Planet begins the adventures of the remarkable Dr. Ransom. Here, that estimable man is abducted by a megalomaniacal physicist and his accomplice and taken via spaceship to the red planet of Malacandra. The two men are in need of a human sacrifice, and Dr. Ransom would seem to fit the bill. Once on the planet, however, Ransom eludes his captors, risking his life and his chances of returning to Earth, becoming a stranger in a land that is enchanting in its difference from Earth and instructive in its similarity. First published in 1943, Out of the Silent Planet remains a mysterious and suspenseful tour de force.

If you've read this blog for any amount of time then you know I'm a C.S. Lewis fan. I've known about his Space Trilogy for years, but hadn't gotten around to it until this year. It felt really nostalgic to read something by this classic author again. ^ ^

The Plot: The plot kinda ambles. This is more of an exploration tale than one that's goal-based, so I did find myself wanting for things to move along already at certain points.

The Characters: The main character Ransom was kind of the average joe blank character that was the way for the readers to experience the adventure. He didn't particularly stand out to me as a character besides his love for languages. That was cool and I liked how he really analyzed the languages spoken by the sorns and hrossa.

Weston and Devine are pretty typical scoundrels. They didn't particularly stand out to me either. My favorite character was Hyoi the Hross. He was sweet and I enjoyed his innocence.

The Setting: Now this book was written in 1938, which was 20 years before the first rocket was launched into space, so Lewis had to theorize how space travel would work. He had a lot of interesting theories such as he believed that a space ship would have to have its own center of gravity like a small planetary core and also he believed that the space ship would be then affected by the planet's gravity when it got close and that this would make you horribly sick. He also didn't know about coolant and air filtration systems, so the characters had to strip down on the ship and try to conserve air. He was almost right when he speculated that our weight changes depending on the gravity. So though he was off, he wasn't too far off.

The planet of Malacandra was very creative. The trees are like giant vegetables, the water is effervescent and warm, and the atmosphere ends very close to the planet. The aliens are also very creative. My favorite have to be the hrossa. An artist on deviantART named Deimos-Remus did some amazing art of them. They're exactly as I pictured them too. 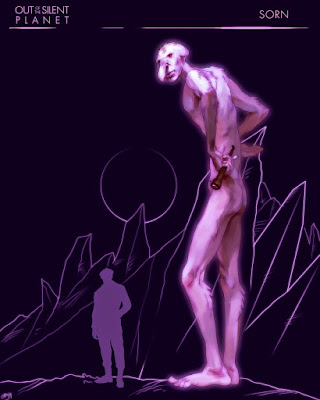 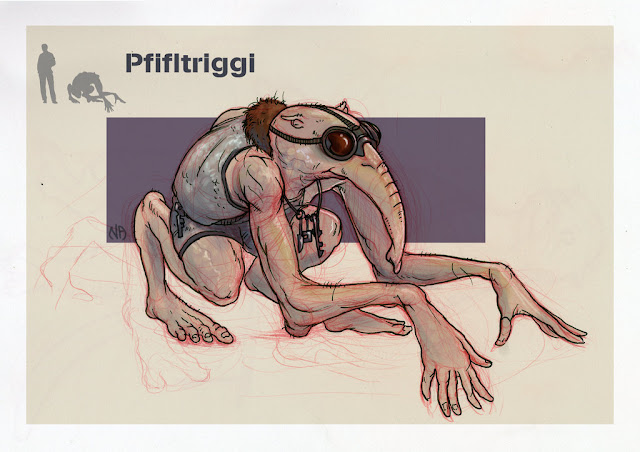 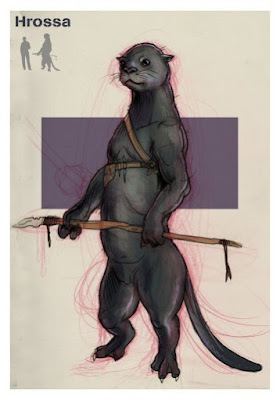 Epic Things: I really love how Lewis described space as "womb of worlds." That gave me such a beautiful picture.

The Theme: Surprisingly the "Silent Planet" is actually Earth. The species of Malacandra are very spiritually connected and they can't comprehend how on earth our species has fallen so out of touch with our creator. These creatures don't even have a word for "bad." The closest they have is "bent." They also don't understand why we would kill one another. It's an interesting exploration of species that have a completely different mindset than humans.

Content Cautions: There actually is a little bit of swearing in this book. D*** is used six times, a** once, and h*** once. There is some drinking and mention of intoxication, talk of sex, and Ransom,Weston, and Devine are naked at one point on the ship because it's very hot. A character is shot.

What We Can Take Away For Our Writing:
1.) Making Aliens Seem Truly Alien - I thought Lewis did a great job of really making me feel like this was a very different planet from earth. From species to vegetation to water to language all of it felt alien as opposed to mostly like earth with a little variation if that makes sense.

How this can be applied to writing: When creating aliens let your creativity go wild. The weirder the better!

Conclusion: I liked it, but it wasn't my favorite C.S. Lewis work. However, I still think it's very creative.

About the Author:
Clive Staples Lewis (1898–1963) was one of the intellectual giants of the twentieth 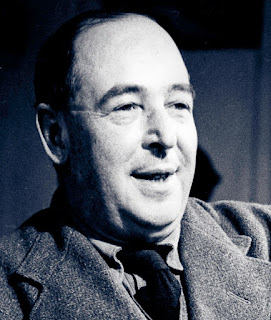 century and arguably one of the most influential writers of his day. He was a Fellow and Tutor in English Literature at Oxford University until 1954, when he was unanimously elected to the Chair of Medieval and Renaissance Literature at Cambridge University, a position he held until his retirement. He wrote more than thirty books, allowing him to reach a vast audience, and his works continue to attract thousands of new readers every year. His most distinguished and popular accomplishments include Mere Christianity, Out of the Silent Planet, The Great Divorce, The Screwtape Letters, and the universally acknowledged classics The Chronicles of Narnia. To date, the Narnia books have sold over 100 million copies and been transformed into three major motion pictures.