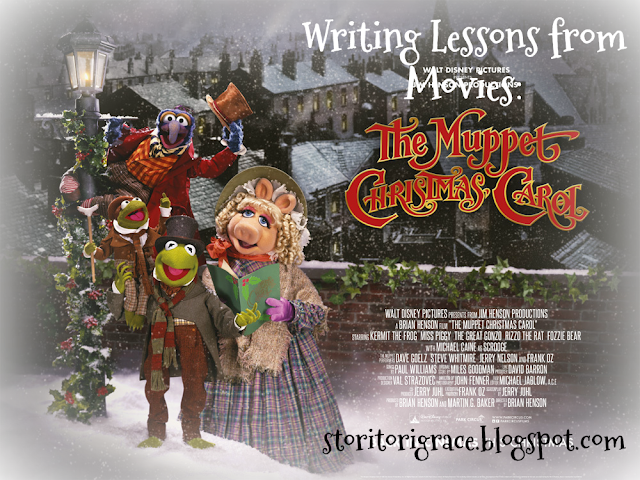 I love the Muppets. I've been watching them for as long as I can remember. I love the characters and I adore their brand of humor. They're done a lot of their versions of previously-told stories, but my favorite one is the Muppet Christmas Carol. They took a famous classic story and gave it a Muppet twist, casting themselves as many of the key characters and Michael Caine as the infamous Ebenezer Scrooge (which is my favorite role he's played in next to Dirty Rotten Scoundrels and the Dark Knight trilogy). A Christmas Carol has been told in many different versions other than the original story (There's versions from 1938, 1951, 1984, 1999, 2009, and the version told in Mickey's Magical Christmas: Snowed in at the House of Mouse) and I'm talking specifically why the Muppets version is my favorite and what makes it stick out, so I'll be critiquing less of the classic storyline and more of why the Muppets version worked so well. Okay? Okay.

1.) Adapting a Mature Story for Kids - The original version included a lot more spook, including the dark side of Ghost of Christmas Present when he reveals two emaciated children named Ignorance and Want. This has been included in some versions and it's always creeped me out. The story could be much more creepy if allowed such as in the 2009 version of A Christmas Carol which bothered me when I watched it as a teen, but The Mupper Christmas Carol does a good job of balancing the more spooky elements with lightheartedness, the creepiest being in the climax with the Ghost of Christmas Yet to Come. Even the characters acknowledge that it's spooky.

How this applies to writing: When adapting a story to a younger audience, it's best to keep in mind a child's sensitivity. I can't tell you how many movies I watched as a kid growing up in the 90's that traumatized me because people didn't understand what scares a child. Keeping a balance between severity and lightheartedness is very important to keep in mind. 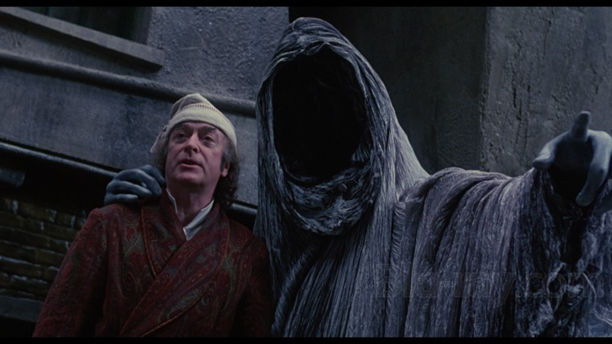 2.) Having a Mean Protagonist - Ebenezer Scrooge is the main character and as the opening number clearly states, he's the meanest man in London.

"Hello. Mr. Humbug. Hello, Mr. Grim. If they gave a prize for being mean the winner would be him."

Scrooge shows cruelty to his employees when he refuses to light a fire for them even though the office is freezing. He even bridges on evil with his famous line, "If they [referring to widows and orphans] are to die they ought to do it and reduce the surplus population." Though one thing I love particularly about Caine's performance is he shows a glimpse of the good man inside when he shares a genuine laugh with his nephew.

As is the focal point of A Christmas Carol, Scrooge changes as he comes to know that the world doesn't revolve around him and how people really think of him. His character arc is drastic and that's what makes Scrooge a compelling character. When we see glimpses of his past we begin to sympathize with him. In this version we see that all the way from when he was a child and how he grew up very lonely but hardworking. We start to see the why about the character and that's when we finally begin to like Scrooge just a little bit. The joy of the movie is watching Scrooge change from a selfish, crotchety, miser to a compassionate and giving man.

How this applies to writing: Having a very mean protagonist can be the downfall of a novel. Dicken's got away with it because the redemption of the protagonist was the point of the story, but in a regular story it's best to make sure there is at least one redeeming factor to this character, so the readers don't shut the book.

3.) Knowing When to Stop the Jokes - The Muppets are famous for their comedy and this film is classified as a comedy. There are many lines in this film that still have me in stitches every time I hear them such as, "Well hoity toity Mr. Godlike Smarty-Pants."

But Director Brian Henson knew when it was time to stop the jokes and let the readers feel emotional tension. I recently encountered in Thor: Ragnarok when a director let the jokes take precendence over the emotional tension of the movie and I greatly disliked it. It was like he cut off the viewers from grieving or empathizing for the characters and it made a huge emotional disconnect for me.

In The Mupper Christmas Carol there are several times where the jokes stop and you can really feel for the characters such as when Tiny Tim dies in the alternate future, when Scrooge sees that he died alone and begs the Ghost of Christmas Yet to Come to give him a second chance, and, the most emotional for me, when Scrooge has to watch his younger self foolishly leave behind the only woman Scrooge really loved. It breaks my heart to watch Scrooge sing with Belle as she can't hear him, overcome with regret for a decision he can no longer take back.


And yes, some dreams fall through.
Yes the time has come for us to say goodbye ..."

How this applies to writing: The reason why I'm very selective with my comedies is that I can't stand the emotional disconnect an ill-placed joke can make. There are some movies that completely don't take themselves seriously that I enjoy such as Clue, but movies such as The Princess Bride could be easily ruined if a joke was put at the wrong time and ruined the emotional connection from the viewers to the characters. So keep in mind, though comic relief is important, comedy can also be an emotion obliterator. The best films don't just make you feel happy, but make you feel sadness, fear, disgust, and anger too.

Conclusion - Knowing how to balance emotions, handle audience, and create a memorable main character despite his or her bad attitude can be tough, but it's what makes movies classic. Merry Christmas and God bless us everyone!

Have you seen The Muppet Christmas Carol? Have you noticed these writing aspects? What movies have you noticed have good writing? Let's geek out together!