Harry Potter and Pacing: Why I Believe the Movies Did a Better Job 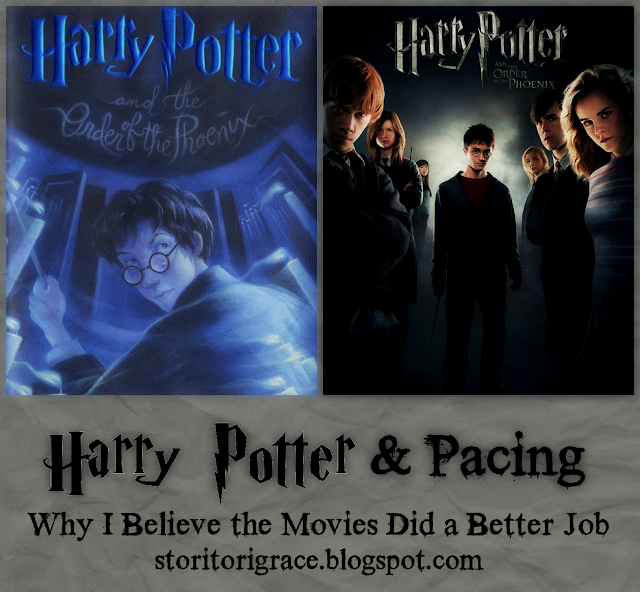 I’ve finally (almost still working on Deathly Hallows) read all the books and seen all the movies so I can finally give my verdict about the series as a whole: I like it but I actually like the movies better. Before throwing pitchforks at me hear me out. From my observation, though the books have a lot of great details and characters that couldn’t make it into the movies (such as Ginny's reason for putting herself so fully into Tom Riddle's diary and Voldemort's love for trophies), the movie cut down on some of those to keep within the optimal runtime and to keep better tabs on the pacing. I believe in especially the case of Order of the Phoenix and the Goblet of Fire this actually improved the stories because they became tighter.

1.) The Trouble with Formulaic Writing That Affects Time - Keeping a story that is supposed to run over the exact course of a school year in several ways was a shot to the foot to Rowling. Many events that could have taken place in just weeks or even days were drawn out to months.

An example is Harry figuring out the secret to the golden egg in the Goblet of Fire taking months. Honestly, I got a bit frustrated with Harry for procrastinating so much considering I figured out what the egg did months before he did. In the movie, the time seemed much shorter.

Another example is the polyjuice potion in the Chamber of Secrets which takes a month to brew. This just seemed a bit like a cheat to stretch out more time in the school year.

In the Order of the Phoenix, the teacher inspections and the ministry decrees happen over a looooooong course of time. In the movie, these events happened in montages so though a lot of time passed the plot didn’t slow down.

How this applies to writing: When you’re writing a first draft keep in mind how long events are taking. An event can take a long time but if it feels like a long time then it can feel like the writer is just drawing the plot out.

Avatar the Last Airbender did a good job at this. When the gang arrives at Ba Sing Se they have to wait a month to see the Earth King. Instead of he writers drawing that out with extra episodes, they did one episode with a motley of stories to show the progression of time without taking away from pacing.

2.) Keeping the Events that are the Most Relevant to the Plot - The Goblet of Fire and the Halfblood Prince had a lot of events that didn’t make it into the movies such as the expanded scenes on the Quidditch World Cup, the Death Eater trials, and more Voldemort flashbacks. I really liked reading about them in the book but I understand why they took them out in the movie.

The Quidditch World Cup made getting to the actual Goblet of Fire a lot slower. And some of Voldemort’s flashbacks, though super interesting, weren’t directly related to building up to the horcruxes so I see why they were left out. It was neat to know that he selected items that were considered trophies but was it absolutely essential for the plot to move forward? No.

How this applies to writing: However much we want to talk about the amazing elaborate details of elements to our stories sometimes we have to let them go to keep the momentum of our stories moving forward.

3.) Moving events to when they are more relevant - In the Order of the Phoenix novel, Ron Weasley gets on the Quidditch team, but in the movie, he doesn’t do this until the Halfblood Prince. This makes a lot more sense since much more of the main plot revolves around Quidditch in the Halfblood Prince such as Harry becoming the team captain and Cormac coming into the story. Extraneous elements that can be moved to a more relevant time can bog down the plot.

How this applies to writing: Are there subplots in your story that would be best moved to a sequel?

4.) Cutting Characters - The Harry Potter novels have A LOT of characters and in a film, it’s hard to do that many characters justice so many of them didn’t make it into the films such as Winky and Ludo Bagman. These characters had interesting subplots of their own but they weren’t essential thus they had to be cut. Too many characters can be millstones to a plot.

How this applies to writing: Sometimes characters have to be cut for a tighter plot. It can hurt sometimes, but there’s always the chance they can be put in another story. 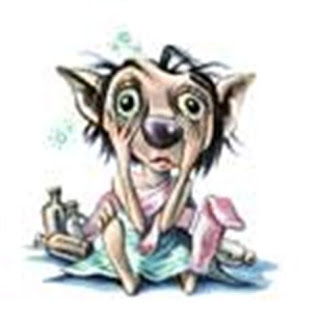 5.) Giving Roles Some Characters Had to Other Characters - Lucius Malfoy and Luna have much bigger parts in the Order of the Phoenix movie than they do the book. In the books, Lucius is in prison but in the movie, he’s more of an activist villain which I personally preferred. Luna is given a bigger part concerning the Thestrals as opposed to Hagrid introducing them in the book. Hagrid already has a large part and giving Luna more screen time with the thestrals defined her more as a character.

How this applies to writing: What characters can you consolidate? What scenes you originally gave one character would be better given to another?

Conclusion - Don’t get me wrong I like the books and they’re the reason the movies were made in the first place but I think they’re one of many cases where a movie can actually be better than a book. It can feel like the book is actually another draft of the story. Other examples of this are the Hunger Games, the 5th Wave, and Attack on Titan. All of these are very loyal to the spirit of the book but many of the changes actually improved on the writing. I believe Harry Potter is the same.

You may also like:
5 Ways Classic PC Adventure Games Trained Me to Be a Writer
Not-As-Much-of-a-Jerk-as-You-Could-Have-Been Award Characters 101
6 Questions to Ask Yourself if a Point of View is Necessary for Your Novel
9 Non-Character-Related Obstacles to Make Your Characters' Lives Harder with Avatar: The Last Airbender
The Psychology of Writing: Villain Motivation and the CANE Model: A Guest Post by Casey Lynn Covel