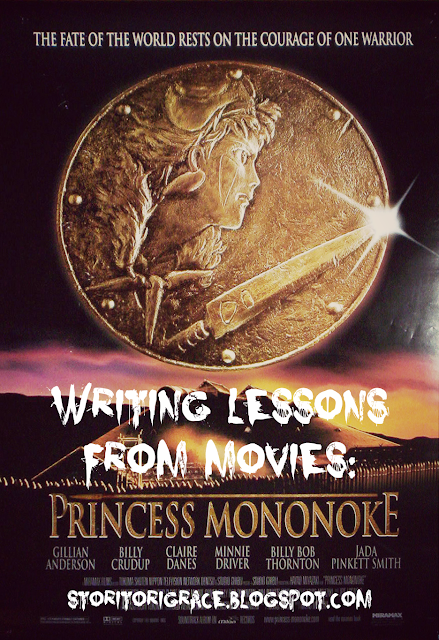 I recently finally watched Nausicaa: Valley of the Wind (I have no idea how this movie evaded me all this time), which made me want to rewatch Studio Ghibli’s other nature-centered film Princess Mononoke. Man, it is such a good movie. This was my third time viewing it and I feel like it’s taken all three watches for me to truly appreciate it.

Princess Mononoke is about Prince Ashitaka who is poisoned by a demon boar and banished from his land to travel to the west to discover the demon’s origin and possibly a cure to his ailment. He encounters a land torn asunder by conflicting ideals of man and beast and must see it through eyes not clouded by hate to bring peace to the two sides before they destroy each other.

Warning: Spoilers. I’m trying to keep them as minimal as possible. The larger ones are in points 2, 4, and 5.

1.) Correct Handling of Bow - I bet most of you don’t know it’s unhealthy for a bow to be strung all the time. It puts strain on the wood. Ashitaka strings and unstrings his bow and it’s refreshing to see that the writers put enough thought into the story to remember to put that detail in.

How this applies to writing: Have characters string and unstring their bows.

2.) Dealing with Multiple Warring Parties - There are four warring parties to deal with in this film, some nobler than others. Asano just wants Irontown for its wealth, Jigo wants the Forest Spirit’s head for wealth, Lady Eboshi wants to create a safe workplace for her people, and the beasts want to defend their home. Asana and Jigo are easy to villainize, but despite Lady Eboshi’s callousness toward the beasts of the forest has bought the contracts of dozens of prostitutes and given them an honest living and she’s bandaged lepers and given them a home.

The beasts have the innocent desire to defend their home but some have become so consumed by hatred toward the humans they’ve become monsters. The main two parties have their good sides and bad sides so this presents a very difficult dilemma for Ashitaka. Who should he side with? Man? Beast? Who’s right? Who’s wrong? Is there a way for both to live together in harmony?

How this applies to writing: Often both sides in a war have lighter and darker sides. For a foreign party coming into the equation, this can create a lot of conflict for them which is great for storytelling. ;) Another great example is in the Hobbit.

3.) Tricking Animals - Beasts are formidable opponents. In a Greek myth, two brothers constructed man and beast out of clay and had a jar of gifts from the gods to give them but one brother gave most of the gifts to the beasts, leaving very few for man. Thus man will always be at a disadvantage physically of beasts and will need to use his wits. When Jigo and Lady Eboshi go up against the beasts they use a lot of trickery like wearing animal skins, painting animal blood on their faces, and burning fires that give off an odor that blocks the beasts’ sense of smell. This levels the playing field for them.

How this applies to writing: If you have characters going up against beasts think of how they’re going to contend with especially beasts’ sense of smell. Sounds gross but hunters will use urine, scent glands, and yes blood to disguise their scents from their quarry.

4.) The Theme of Hatred - Hatred is poison. That’s a huge theme in Princess Mononoke. A boar is so consumed by hate and anger he’s transformed into a demon who is consumed by rage and only cares about destruction. The apes have become so hateful they’ve even stooped to desiring to eat humans with the mad intention of absorbing their strength. The animals are right to be angry about their home but wanting the demise of any race cannot be justified.

How this applies to writing: Princess Mononoke showed a physical representation of hate as boar overcome by it are covered with writhing demonic parasites. Hate can drive so many people to do abominable things. Have you ever thought of writing hatred as a theme for your story?

5.) The Theme of Man Living in Harmony with Nature - Man and nature is a highly discussed topic. I, personally, am back and forth with it, especially because of my faith. I don't think man should completely submit to nature and go back into a simpler way of living that would also bring back higher mortality rates. I don't think we should go so crazy green that we make life for people who can't afford to be green (Yes, this is a thing) difficult. I believe there's a middle ground, which is why I really like Studio Ghibli's portrayal of this theme both in Princess Mononoke and Nausicaa: Valley of the Wind. There are ways for man to live in harmony with nature and still thrive. Princess Mononoke brings out the best and worst of man and of nature. Both are good, but both can conflict.

How this applies to writing: Have you thought of writing a story surrounding man and nature?