Why I Love Writing Second Drafts 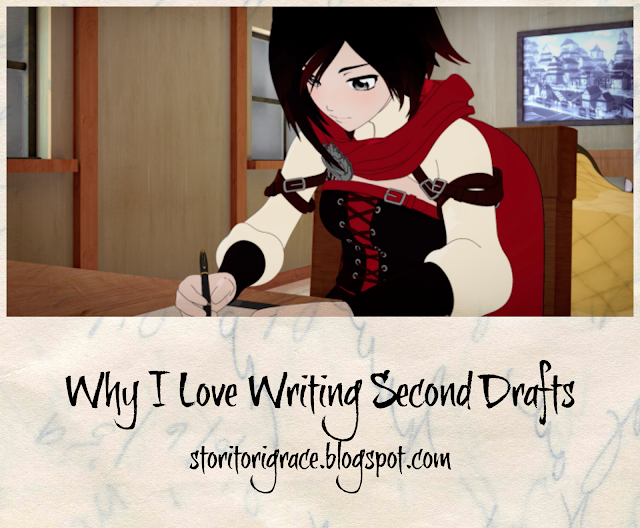 NaNoWriMo is the time of the year when we word vomit our first drafts but I relish the coming time when I can smooth out that rough draft and shape it into something more cohesive. NaNoWriMo helps me speed through the initial messy beginning, but here’s why I love the second draft.

1.) You Already Have Blueprint with the First Draft - In the first draft (at least for me) despite all of my planning and my love for pantsing certain sections of the story there’s a lot of “Uhhhhhh what are the characters supposed to be doing?” moments where promptly afterward I chat up one of my friends go get me out the hole.

In second drafts you’ve already got the main base of story finished, so you have something build off of and writing usually goes faster for me because of that.

2.) You Have the Satisfaction of Smoothing Out that Clunky Prose - My prose is crap in first drafts. I sometimes omit describing things cause I just want to move on or describe for paragraphs. My character movements are often super generic and I have people swallow, shrug, and frown at least fifty times. Though I don’t hone everything in my second drafts, my prose is usually all around way more palatable and I just get a satisfying feeling from doing that.

3.) Elements You Touched on in the First Draft Can Expand - I write short first drafts then expand in my second drafts which I really enjoy because often things that I just brush over really flesh out in the second draft when I slow down and take more time to really ponder them. Like in my second draft for Silver Hood, I expanded way more with little tidbits of backstory in the point of views. It really fleshes out and personalized the POVs.

Which do you like to write more? First drafts or second drafts and why? Have you participated in NaNoWriMo before?

You may also like:
3 Things to Note While Writing First Drafts to Make Editing Easier
Why the Editor Isn't the Bad Guy
Writing vs. Editing: The Different Mindsets
Extending Your Novel: How to Make the Story Longer Without Just Adding Fluff
How I Do Betas: Tips on Efficiently Testing Your Book on Willing Test Subjects