The Plot: The plot is very slow moving and thoughtful and jumps around in several timelines. I felt like the main reason this worked is that the book is written in third person omniscient. When the narrator mentions a person is going to die in a week or a few months into the future it gives you this surreal sense of dread. Unlike other apocalyptic stories, it wasn’t full of gratuitous gore (which I appreciated). Any violence mentioned was tasteful and realistic. This is definitely different than any other apocalyptic story I’ve read or seen.

The Characters: This story has a large cast of seemingly disconnected characters but you slowly see they’re all connected even if they don’t know it. Kirsten is definitely my favorite since I love her passion for acting. All of the characters are complex and fleshed out. From Miranda to Clark to Arthur to Jeevan. All of them have different perspectives on the apocalypse or don’t see it at all. It’s like a tapestry of characters. Definitely made me think of quantum entanglement.

The Setting: The settings are so diverse. Much of it takes place in Toronto, Canada which is why Cassia likes it. ;) But then some also takes place on the Midwest United States or NYC or even Malaysia. Seeing the world before and after the epidemic is chilling but intriguing at the same time.

Epic Things: I love the Star Trek references like the line, “Survival is insufficient.”

The Theme: Butterfly Effect is definitely a big theme in the story as everyone affects everyone. Everyone is important and without everyone the world working together it falls apart. An electrician is just as important as a politician to keep the world running.

Content Cautions: This is definitely an adult book. The content isn’t detailed but it’s there. A character has multiple affairs and characters sleep together off screen and one character is gay. There’s smoking, mention of doing cocaine, and drinking. A character commits suicide, rape is mentioned, and some characters kill others but no excessive gore. There’s some sparse swearing including seven instances of f***, six instances of godd***, seven instances of h***, five of Christ, and one of bulls***, bi***, Jesus, and ba*****.

Excellent Use of Third Person Omniscient - The author really uses this POV to the fullest. I feel like the book wouldn’t be the same if she didn’t. Most of the time when I read a book written in this POV I’m like, you could have just written this as limited and gotten an even better effect. But this is the first book I’ve read where having an overhead view allow you to put together connections the characters can’t or see tidbits into the future that give an overall effect.

How this can be applied to writing: If you’re considering writing in omniscient definitely check out this book.

Conclusion: The plot was a bit too slow moving for my taste and though I really liked the introspection I found myself wondering what the point of all of it. I’m glad I read it. It’s just not my favorite.

About the Author: Emily St. John Mandel was born and raised on the west coast of 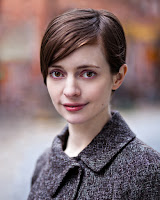 British Columbia, Canada. She studied contemporary dance at the School of Toronto Dance Theatre and lived briefly in Montreal before relocating to New York.

Her fourth novel, Station Eleven, is forthcoming in September 2014. All three of her previous novels—Last Night in Montreal, The Singer's Gun, and The Lola Quartet—were Indie Next Picks, and The Singer's Gun was the 2014 winner of the Prix Mystere de la Critique in France. Her short fiction and essays have been anthologized in numerous collections, including Best American Mystery Stories 2013. She is a staff writer for The Millions. She lives in New York City with her husband.
Website//Facebook//Twitter//Instagram//Goodreads