When Lewis Barnavelt, an orphan. comes to stay with his uncle Jonathan, he expects to meet an ordinary person. But he is wrong. Uncle Jonathan and his next-door neighbor, Mrs. Zimmermann, are both magicians! Lewis is thrilled. At first, watching magic is enough. Then Lewis experiments with magic himself and unknowingly resurrects the former owner of the house: a woman named Serenna Izard. It seems that Serenna and her husband built a timepiece into the walls--a clock that could obliterate humankind. And only the Barnavelts can stop it!

I'm one of those people who likes to read the book before seeing the movie and I did that ... after I finally got a hold of the book in December the movie was out of theaters so I saw it at home. XD Oops. Anyway, this is a cute little middle-grade book, which is definitely in a different tone than the film.


The Plot: This is a really simple middle-grade book. There's an underlying mystery of what the clock does in the house, but the story does tend to amble a bit to appeal to fun little things that children like stars, cookies, and illusions. The book actually glazes over some darker subjects such as necromancy. It features a character performing necromancy, but it isn't portrayed as extremely scary to make it age appropriate.

The Characters: This book has a very small cast: Lewis Barnavelt, Uncle Jonathan, Mrs. Zimmerman, Tarby, and Mrs. Izard. There are a few side characters, but they barely have a page of "screen time." Lewis is an intelligent young boy who's very curious and has a love for history, but he's also mourning over the loss of his parents. I really like Jonathan and Mrs. Zimmerman's best friend relationship and they're both very kind to Lewis. It's cute and refreshing. Mrs. Izard is a formidable villain and Tarby is the kind of friend you look back into childhood and are like, I can't believe I voluntarily tried to be friends with that kid.

The Setting: The setting is in a midwestern fictional city of New Zebedee, Michigan, and since the book elapses at about a year you get to see it in all season, though most of the book is concentrated on the house, which is very fascinating and mysterious for a child. There's also an underlying community of magicians that have studied at schools and such which because of the audience isn't explored too much.

Epic Things: The magic is really cool with Jonathan being a moon wizard and there being an eclipse, the garden with red worms in the glowing grass a night, canes instead of wands, illusions, and moving stained glass. I also like that Jonathan likes to collect foreign coins being a numismatist myself. It's also interesting that the author added the detail of some graves in a graveyard having lambs on top of them. I live next to an old cemetary and those type of graves mark where children have been buried.

The Theme: Courage is definitely the theme. Lewis is curious but hesitant, but he finds his courage as the book goes.

Content Cautions: If you don't like a lot of magic, you're probably not going to like this book, since one of the main characters does perform necromancy at one point. It'scondemnedd but still it's a little dark. There's some religious fanaticism with a character talking about bringing about the Biblical end of the world. One character uses hell as a swear.

The Film: The plot of the movie is pretty similar to the book as are the characters with some slight changes to appearance, though the film is significantly darker than the book. It still has some kiddy humor, but the villain makes a deal with a demon and some of the minions and magic are significantly more creepy. 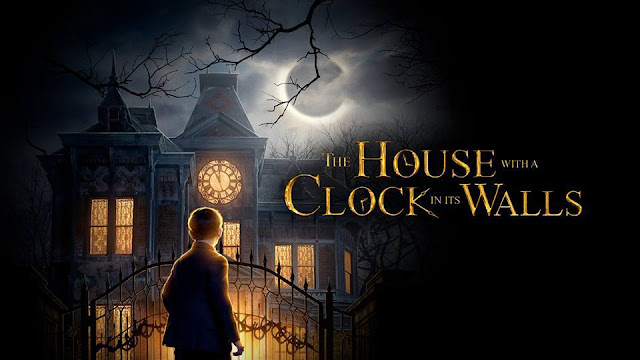 Conclusion: It was a cute book. I wasn't enthralled but it was a fun read. John Bellairs (1938–1991) was an American novelist working primarily in the Gothic genre. He is best-known for the children's classic The House with a Clock in its Walls 1973) and for the pathbreaking fantasy novel The Face in the Frost (1969). Bellairs held a bachelor's degree from Notre Dame University and a master's in English from the University of Chicago. He combined writing and teaching from 1963 to 1971, including a year at Shimer College that coincided with that school's storied Grotesque Internecine Struggle. After 1971, he took up writing as his full-time work. (from Shimer College Wiki)