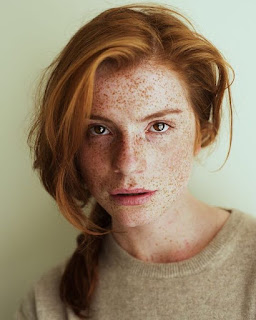 While I was writing Silver Hood and Black Hood the side character Annette grew into a larger and larger character, so I'd like to expand more on her.

Annette Ruacamas is fifteen and the youngest and newest member of Mor Galbraith and Dina Muir's border patrol squad. She is a skilled sharp-shooter with a rifle and she has known Mor and Dina since they were very young. Though she has admired her older peers' skills and looks up to them, she's very mature for her age and she's a calm head in difficult situations.

Instead of growing up in the Western Red Hood Manor all of her life, she was born in a small village where her father was an apple farmer and her mother a scout to keep the village safe from werewolves. It wasn't until Annette was ten that her family moved to the Red Hood Manor so she could begin her mandatory Red Hood training. Her werewolf mimicking abilities enhance her sharpshooting prowess even further and gained her a higher rank in her school sooner than one normally would. When she graduates she hopes to be assigned to the border nests where she can help prevent werewolf attacks from happening before they set foot over the border.

Leave your questions in the comments or in the form if you'd wish to remain anonymous or if you're having trouble with the comments. Annette will answer them next Friday! Thank you!