Writing Lessons from Video Games: The Legend of Zelda Twilight Princess vs. Okami 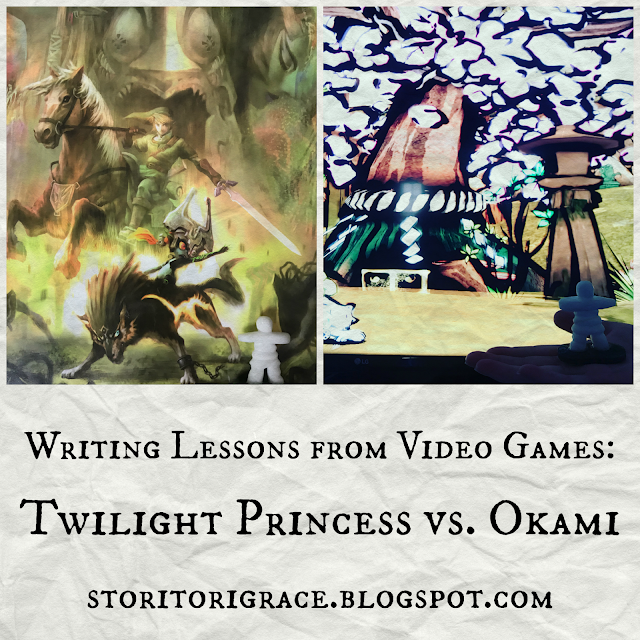 Twilight Princess is my favorite Legend of Zelda game, but one other game that was recommended to me because I like that one is Okami. Both are very similar in concept. They both have wolf protagonists with plucky companions who want to save the world from a great darkness. I've wanted to play Okami for over ten years and then I finally got it on my Nintendo Switch last year. Though it has a lot of interesting elements like fighting with a paintbrush, a unique art style, and Japanese lore, it falls a good deal farther back than Twilight Princess. And I'm going to explain why in this comparison edition of Writing Lessons.

But in case you haven't played both of these Japanese games ...

In Twilight Princess Link is just a simple farm boy with a knack with swordsmanship. When great darkness sweeps over the land and curses him in the form of a wolf, he must travel through Hyrule and beyond to regain his human form and save all he loves from a life of torment. Midna, mysterious imp, accompanies him on this quest, but Link is unsure if she is truly helping him save the world or just using him for her own means.

In Okami, you are Amaterasu the goddess of the sun bound to a wolf form, but you've lost all of your memories and with it your powers. Issun, a tiny "wandering artist," travels with you on a quest to regain your divine abilities of the brush and defeat the eight-headed demon Orochi who wishes the bring the whole world into shadow.

Warning: Spoilers for both games.

1.) Sidekick Comparison - Issun (Okami) and Midna (Twilight Princess) have a lot of similarities and a lot of stark differences.

Issun is tiny, spunky, and a bit of a perv. He got on my nerves with his perviness and he loved to comment on any "hot babe" that they encountered. Sometimes this characteristic can be funny with characters, but with him, it was way too overdone. He starts the game wanting to use Amaterasu to find the celestial brush techniques so he can use them for himself but in the end, he learns to care for Ami as he calls her. Some of the game is devoted to his backstory and finding out where in the world a one-inch person comes from and this adds a little sympathy toward him, but I just could not connect to him because of his pervy and disrespectful personality.

On the other hand, Midna is cunning, shrewd, and a little creepy. She has some comedic traits but at the same time, you're wondering throughout most of the game if you can trust her or if she's going to stab you in the back. In the game, she's far more useful to Link. Her abilities come in handy frequently while Issun doesn't do a whole lot but give you hints. Midna goes through a massive character arc where she goes from using Link to sacrificing her life for him. Especially when you find out her tragic backstory you feel deeply sympathetic to her and she even visually changes in her attitude toward Link as the game goes.

How this can be applied to writing: Sidekicks are a great element for your main character to have but what are they adding to the story? If they're just there for some occasional info and so your MC isn't alone then they honestly don't have much use.

Comedy is a fine line to play with, especially with a character who sticks with your MC throughout the story. Make sure their comedy is well-timed and not overdone or it can quickly go from laughs to groans.

2.) Orochi vs. Ganondorf - Both games have a big bad fella to fight in the end, but both are very different.

Orochi is an eight-headed demon who escaped from its prison and is now terrorizing the world again with his forces and powers. His demonic plagues infect much of the world and make it poisonous to live in. In one instance his powers even make a whole city sick. You encounter this villain multiple times in the game and slay him with your powers and by making him drunk with sake.

Ganondorf is a force that's been around for Link's reincarnations again and again. He is a demon thief who inflicts darkness and terror wherever he goes. Years ago, he was captured and to be executed, but before using a divine force he cheated death and was instead banished to another world. Now someone has brought him back and he's seeking to cover the world in darkness forever, threatening all Link loves. Instead of beating him more than once throughout the game, you only fight him at the very end. This leads up to this big climax that Ganondorf truly is an evil force to be reckoned with.

How this can be applied to writing: The reason why Ganondorf is a better villain because not defeating him means a more personal cost to Link. Yes, Orochi once killed Amaterasu in her past life, but she hardly shows any connection to loved ones unlike Link who has plenty of loved ones to lose and the writers of Twilight Princess exploit that by threatening them at nearly every turn.

If your main character doesn't defeat your villain what will they personally lose?

3.) Comical vs. Serious - Both games have a good bit of humor, but one is better at balancing it than the other.

Okami has a lot of comedy. Even in serious moments Issun often cracks a joke. The characters also have strangely comical designs that throw off some of the seriousness for the story as well.

Twilight Princess is far more serious than comical and doesn't insert humor during serious moments. But there are moments for levity too. I mean the cannon guys. I'll just leave that there. 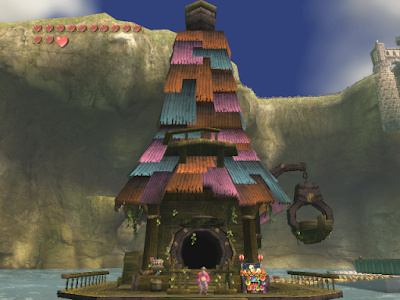 How this can be applied to writing: Comedy is necessary for a good story. If it's serious throughout the whole thing readers can get bored or depressed. But having a balance is really important. The prime reason why I didn't like Thor Ragnorok was that the humor was so imbalanced. Too much comedy. Not enough emotional resonance.

4.) Many Climaxes vs. One Big Climax - Now the biggest difference between the games is story structure.

In Okami, you think you've defeated Orochi for good then PSYCHE his spirit wanders to another land and you've gotta go chase him again and the game goes on for a whole lot longer than expected. Everything seemed to be wrapped up but then it was all uprooted again.

In Twilight Princess, the whole game builds up to defeating Ganondorf. There's one moment where you think the game is finished when you defeat Zant but before it can seem like the end he reveals he's working for someone. So this did something similar as Okami, but instead of tying up the loose ends it flows smoothly into the next phase of the plot.

How this can be applied to writing: Now I've seen the multiple climaxes thing work like in Ni No Kuni: Wrath of the White Witch for instance, but there were loose ends that needed to be tied up in the "fake ending" for Ni No Kuni. You knew there had to be more with Okami there didn't seem like there was more to be done and it was just too jarring and just felt like you had to do a bunch of things all over again.

Conclusion - Both games have their strengths and weaknesses, but there are definite differences that led to better or inferior storytelling.

Have you played Twilight Princess or Okami? Have you noticed these writing aspects? What movies have you noticed have good writing? Let's geek out together!