A Book Review of Mistborn: The Final Empire by Brandon Sanderson 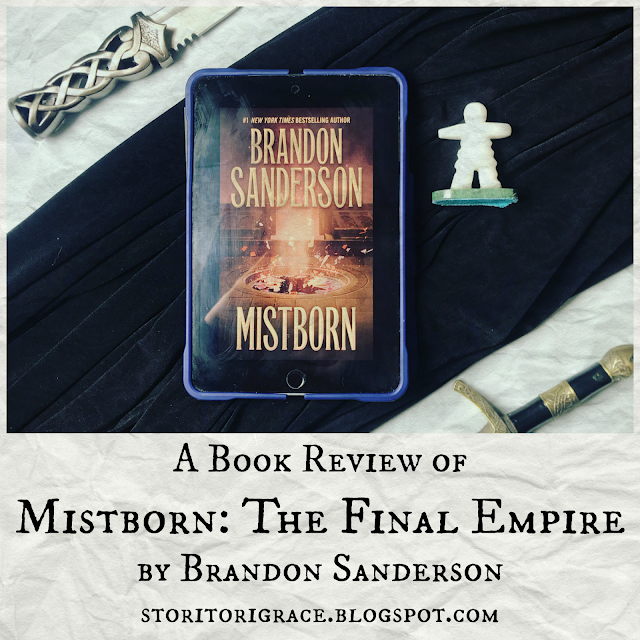 Kelsier recruited the underworld's elite, the smartest and most trustworthy allomancers, each of whom shares one of his many powers, and all of whom relish a high-stakes challenge. Only then does he reveal his ultimate dream, not just the greatest heist in history, but the downfall of the divine despot.

But even with the best criminal crew ever assembled, Kel's plan looks more like the ultimate long shot, until luck brings a ragged girl named Vin into his life. Like him, she's a half-Skaa orphan, but she's lived a much harsher life. Vin has learned to expect betrayal from everyone she meets, and gotten it. She will have to learn to trust if Kel is to help her master powers of which she never dreamed.

This saga dares to ask a simple question: What if the hero of prophecy fails?

I read Steelheart several years ago and I honestly don't remember a ton about it, but I've been wanting to try some Brandon Sanderson again and fans of his that I know have been recommending Mistborn, so I tried it and honestly I'm now a huge fan too.

The Plot: This plot is just great. It’s a long wild ride but it’s a journey worth taking. There are so many emotional ups and downs, awesome, twists, a great ending, and it’s just awesome. The beginning takes a little bit to get into but once you do it’s wonderful.

The Characters: I really empathized with Vin. I know some people didn't connect with her, but I get the self-preserving, distrusting nature she has. I mean when all she knows is abuse what do you expect her to think? I also get her fear of abandonment and being alone. She has a beautiful arc though and it’s wonderful to watch her grow both emotionally and with her powers as she trains with Allomancer specialists.

I love Kelsier. He’s an amazingly written character. He’s so funny, clever, and kickbutt. He also has a really neat backstory that I won’t spoil here. But I like how Sanderson wrote him to be very smart more so than a lot of characters nowadays. He covers all of the bases.

The rest of the characters are just great as well with awesome and believable personalities. Some of my favorites are Elend, Sazed, Spook, and Marsh. I really empathize with a Marsh being the older responsible brother yet his younger brother Kelsier who doesn’t always make the best decisions gets all of the attention.

The Setting: The setting is very unique. It's a world where the hero lost so everything is dark and gray and people don't even think that green plants and flowers exist. Ashes fall from the ashmounts and you just want these people to know a world of happiness and beauty.

The powers are really cool and explained very well so I knew exactly how they worked very quickly. This is a semi-complex magic system, but Sanderson really made it understandable. I've read a book where the author wrote a complex magic system and I was so confused, but that was not the case with Allomancy and Feruchemy. I love how they use metals for power and each metal does something different. And in Feruchemy how metal stores power and memories. It's so cool and unique. I also love the glass daggers, obsidian weapons, and mist cloaks. So cool!

The way the society works is really unique and intriguing with skaa, nobles, and obligators, and the Inquisitors are just terrifying. Even the creepy mistwraiths are so creative and spooky!

Epic Things: It’s really interesting how at the beginning of each chapter we get an excerpt in the Lord Ruler’s POV. I also took so many screenshots because this book is just so darn quotable! It made me laugh and it made me think and those are the best sorts of books.


“If you’re always on time, it implies you have nothing better to be doing.” ~Kelsier


"But learn to take a little pride in yourself, kid! If there's anything I can teach you it's how to be self-confident!" ~ Kelsier


"Belief isn't simply a thing for fair times and bright days, I think. What is belief--what is faith--if you don't continue in it after failure?" ~ Sazed


This last one really hit home for me. During this time of pandemic, my faith has taken a hit. I've never experienced as a tragedy as bad as this one in my lifetime. Why did God let this all happen? But I have to believe he'll carry us through it.

There are multiple mentions of rape. The Lord Ruler is considered to be god by many.

1.)  Nicknames to Show Familiarity - Kelsier and his group of friends like to give each other nicknames like Kelsier is shortened to Kell and Dockson to Dox or Marshall to Marsh or Hammond to Ham. From just the first mentioning of the nicknames it definitely alluded to a close bond between this circle of characters. You don't give someone a nickname unless you know them pretty well.

How this can be applied to writing: Nicknames are great. They show friendship and sometimes they’re just adorable.

2.) Calling a Power Something Different Because the Character Doesn't Know What It is - At the beginning of the book Vin knows she has a special power but she doesn’t know what it is so she just calls it her Luck. It isn’t until later that she finds out what she’s doing is Allomancy.

How this can be applied to writing: When characters don’t know what their power is it masses sense that they give it their own unique name. Be creative!

Conclusion: I really loved this book and I’m definitely reading the sequel! 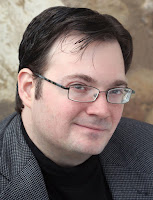 About the Author: Brandon’s major books for the second half of 2016 are The Dark Talent, the final volume in Alcatraz Smedry’s autobiographical account of his battle against the Evil Librarians who secretly rule our world, and Arcanum Unbounded, the collection of short fiction in the Cosmere universe that includes the Mistborn series and the Stormlight
Archive, among others. This collection features The Emperor’s Soul, Mistborn: Secret History, and a brand-new Stormlight Archive novella, Edgedancer.

Earlier this year he released Calamity, the finale of the #1 New York Times bestselling Reckoners trilogy that began with Steelheart .

Brandon Sanderson was born in 1975 in Lincoln, Nebraska. As a child Brandon enjoyed reading, but he lost interest in the types of titles often suggested to him, and by junior high he never cracked a book if he could help it. This changed when an eighth grade teacher gave him Dragonsbane by Barbara Hambly.

Brandon was working on his thirteenth novel when Moshe Feder at Tor Books bought the sixth he had written. Tor has published Elantris, the Mistborn trilogy and its followup The Alloy of Law, Warbreaker, and The Way of Kings and Words of Radiance, the first two in the planned ten-volume series The Stormlight Archive. He was chosen to complete Robert Jordan’s Wheel of Time series; 2009’s The Gathering Storm and 2010’s Towers of Midnight were followed by the final book in the series, A Memory of Light, in January 2013. Four books in his middle-grade Alcatraz vs. the Evil Librarians series have been released in new editions by Starscape, and his novella Infinity Blade Awakening was an ebook bestseller for Epic Games accompanying their acclaimed Infinity Blade iOS video game series. Two more novellas, Legion and The Emperor’s Soul, were released by Subterranean Press and Tachyon Publications in 2012, and 2013 brought two young adult novels, The Rithmatist from Tor and Steelheart from Delacorte.

The only author to make the short list for the David Gemmell Legend Award six times in four years, Brandon won that award in 2011 for The Way of Kings. The Emperor’s Soul won the 2013 Hugo Award for Best Novella. He has appeared on the New York Times Best-Seller List multiple times, with five novels hitting the #1 spot.

Other reviews I've done for books by this author:
A Book Review of Steelheart by Brandon Sanderson