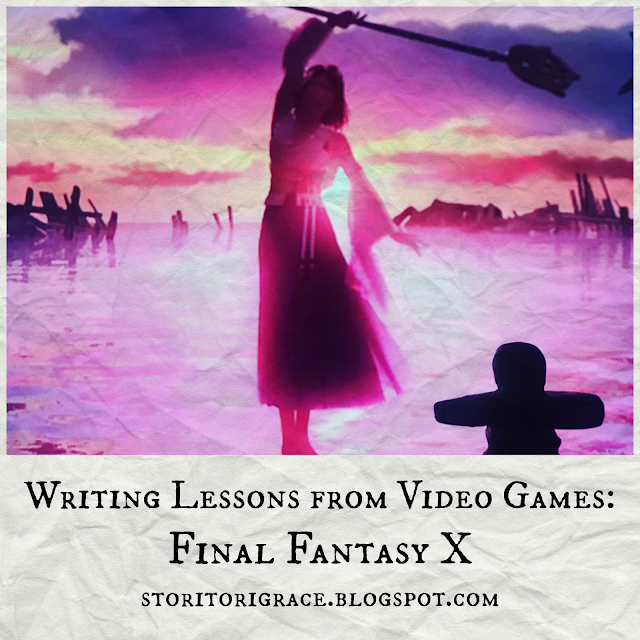 1.) The "Chosen One" isn't the Main Character - Tidus isn't the chosen one to save the world. Instead, he accompanies her on her journey. Instead, Summoner Yuna is the one destined to defeat Sin and possess great power to do so that she must obtain on her sacred pilgrimage. Though Tidus isn't the savior, that doesn't mean his role isn't essential to the story and making sure that peace, at last, comes to the land of Spira.

How this can be applied to writing: The queen, the king, or the savior doesn't have to be the main character. I've seen this work in stories besides this one like The Queen's Resistance and BBC's Merlin. Sometimes the guardian has a more interesting story than the chosen one does.

2.) A Plot Revolving Around a Fictional Religion - Spira has a very prevalent religion surrounding Yevon which is a peaceful religion that involves granting the power of aeons (spiritual fighting beasts) to summoners to defeat Sin and teaches against most machina aka technology. Much of the game involves going to temples to acquire the aeons, discussions about the teachings of Yevon, and people who don't agree with the teachings. Many of the plot twists also revolve around the religion as well.

How this can be applied to writing: Plots that revolve around religion don't just have to be inspirational or Christian fiction. Sky in the Deep by Adrienne Young also had a plot that highly involved religion as the main character feared angering her God. Defy the Stars also has a protagonist where religion played an important part in her life. Religion is integral to how people think and the decisions they make.

3.) A Secret Everyone but the Main Character Knows - Throughout the story, the unreliable narrator that is Tidus's future self implies that there is some secret that the current story self isn't aware of. None of the other characters tell him because they assume he knows and the fellow guardians admit "It was too painful to admit." This puts an air of mystery around the guardians and Summoner Yuna herself and when Tidus finally figures out what it is that they were hiding, he's devastated and it really hit me emotionally.

How this can be applied to writing: Whether the MC is oblivious or searching for answers, a mystery everyone or most knows but him/her can create some really great tension.

4.) The Person Everyone Thinks Is Going to Die Doesn't But Someone Else Does - So the big dark secret that Tidus didn't know was that when Summoners use their powers to defeat Sin they die in the process. About three-quarters into the game you find out about this and no matter what Tidus does there doesn't seem to be a way out of it, until the tables are turned and Tidus does discover a way to save Yuna--at the cost of his own life. In the end, he's the one that has to sacrifice himself for Spira and Yuna can have a life she never thought she could have. FEELS.

How this can be applied to writing: This is a really gut-wrenching turn of events in a story, but if you want a bittersweet ending then this is how to do it.

Conclusion - This game has a rich story and so much to take away from. If you want a story that punches you in the feels then this is definitely one to check out and learn from!