Book Review and Writing Lessons: The Door Within by Wayne Thomas Batson 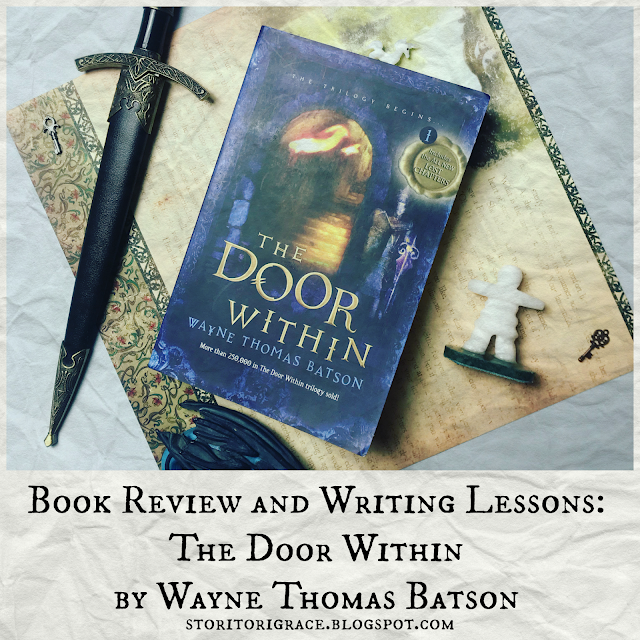 Aidan Thomas is miserable. And it's much more than the strange nightmares he's been having. Just when life seemed to be coming together for Aidan, his parents suddenly move the family across the country to take care of his wheelchair-bound grandfather. When strange events begin to occur, Aidan is drawn into his grandfather's basement where he discovers three ancient scrolls and an invitation to another world.

No longer confined to the realm of his own imagination, Aidan embarks on an adventure where he joins them in the struggle between good and evil. With the fate of two worlds hanging in the balance, Aidan faces Paragory, the eternal enemy. Will Aidan be willing to risk everything and trust the unseen hand of the one true king?

The answer comes from The Door Within.

I’ve heard of this book for years but never got to it until recently. One of my good friends prompted me to get it while at Realm Makers and I even got the book signed by the author, but as much as I wanted to like it the story just didn’t do it for me.


The Plot: It’s a pretty typical fantasy plot with a modern twist. I’d pitch it as The Chronicles of Narnia meets The Wizard of Oz. It has very heavy Christian allegorical themes that have distinctive similarities to Narnia and then there are people there that resemble those in the real world like The Wizard of Oz or Ni No Kuni. The backstory plot read by Aiden in scrolls is basically the story of Christ and Lucifer and one of the main subplots is Aiden leading his dad’s parallel universe twin to Christ. Narnia had more subtly and finesse than this book in my opinion. And though Narnia was obviously omniscient, this book seemed third person limited until all of a sudden there was head-hopping.

I know this book is targeted to Middle Graders but I’ve read books like Percy Jackson and the Olympians as a teen and an adult and the books still have a universal appeal. Some of the kiddy slapstick things that happened to Aiden made me roll my eyes. Even as a kid those weren’t funny to me. Maybe I would like this style of storytelling at that age but now it feels too old hat.

The Characters: None of the characters really latched onto me. The MC Aiden is fine I guess. He has some cute quirky aspects of him like how he wanted to catch bugs from the other world and bring them home but he felt like a character I’ve read a million times. I did really empathize with him about the pain of moving and making new friends and the fascination with a fantasy world but that was the extent of it.

The side characters were alright I guess. Gwenne was kinda sweet. It was obvious the twelve knights represented the twelve disciples though.

I really don’t like anagrams of prevalent names. It’s basically a spoiler in a name and two characters were named Rucifel and Ascriot. Pretty obvious that the latter guy was going to betray everyone and the former was the head of the evil dude’s armies and allying with him is a bad idea.

The Setting: The world was pretty creative. There were some fun creatures like mortiwraiths, blackthornes, lantern spiders, and moonrascals that were fun. The glimpses being like twins from another world reminded me of Ni No Kuni and that’s an interesting concept. Knights riding on unicorns and dragons are pretty cool too. The fact that their eyes glinted different colors depending on their loyalties was cool, except that Ascriot somehow managed to bypass that rule with no explanation.

Epic Things: Most of the epic things I listed above.

The Theme: There were themes of courage that were nice but I wasn’t that crazy about the seemingly anti-science sentiment on page 96.

Content Cautions: There is some violence but that’s the only concern. Some people are stabbed or shot with arrows with some blood mentioned and some people die of poisoned arrows. Any more intense violence is off-screen. There’s a surprising death count of named characters but again most of them die off-screen. Also, a unicorn dies in this thing called “the stilling” and it gave me flashbacks of Artax from the Never Ending Story.

1.) Allegories - The Door Within has a strong allegory about the death and resurrection of Christ and Lucifer’s fall from grace. This is very obviously catered for a Christian audience because of the strength of this allegory.

How this can be applied to writing: Allegories can have powerful storytelling. There are more obvious ones like in The Lion, the Witch, and the Wardrobe, and more subtle ones like the Fellowship of the Ring. The more obviousness of the allegory is really dependent on your audience.

2.) Anagram Names - As I mentioned before there are two obvious anagram names. Ascriot = Iscariot as in Judas Iscariot. Rucifel aka Lucifer.

How this can be applied to writing: If you’re going to do an anagram name and you want the character to be a traitor or something probably should make it less obvious. Personally, I think anagram names should be confined to comedy or satire.

Conclusion: Overall, I could see my younger self liking it but at this age, it wasn’t for me.

About the Author: Wayne Thomas Batson is the Bestselling author of five 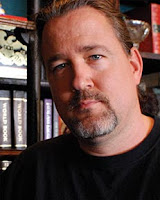 adventure novels including the fantasy epic Door Within Trilogy and the pirate duo Isle of Swords and Isle of Fire. A middle school Reading and English teacher for 18 years, Batson loves to challenge—and be challenged by—his students. So, when he began writing stories to supplement the school district’s curriculum, it was his students who taught their teacher a lesson. Batson’s students were so taken by one of the stories that, over a thirteen-year span, they pushed him to make it into a full-length novel.

That story became The Door Within. Since then, Batson’s students continue to be his frontline editors. Says Batson, “Two things you can count on from middle school students: Intelligence and Honesty. Kids are so much more perceptive than a lot of us ‘Big Folk’ give them credit for. And when something’s not write in the story, they’ll tell you about in very clear terms.” Batson is teaming up with author and friend Christopher Hopper for a new book series, The Berinfell Prophecies. The first book, Curse of the Spider King, hit bookstores in October 2009. It promises to turn the traditional “portal fantasy” on its head, posing the question: What would happen if the fantasy came to us? Batson believes his books appeal to so many kids and adults because, at a deep level, we all long to do something that matters, and we all dream of another world.
Posted by Victoria Grace Howell at 1:00:00 PM