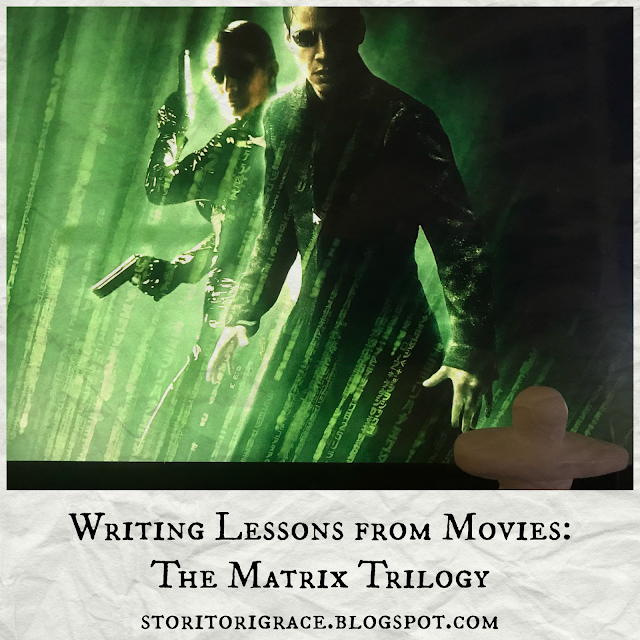 Since I’m at home a lot more than normal I’ve had time to watch movies I’ve been wanting to watch for a long time and the Matrix trilogy was a franchise I’ve wanted to see for I don’t know how long. I watched the first one as a teen but that was like ten years ago and Netflix had all three so I binged them all. Normally I make these posts about movies, shows, and video games I absolutely adore, but this time I’m going to be more critical because this series had such potential then dropped the ball on the second and third movie. Besides the unsatisfying ending that I won’t go into cause spoilers, I’m going to go into some other nitpicks that would have went a long way.

The Matrix is about a man named Neo who discovers that the world he knew was only a computer simulation created by machines to keep the human race pacified as they’re used for batteries for a nightmarish dystopian reality. He journeys with allies Morpheus and Trinity to save humanity for distinction and liberate those trapped in the Matrix.

1.) Using Names from History - Trinity, Morpheus, Zion, Seraph, and the Merovingian are the names of places and characters and all have historical and religious origins. The majority of these are Judeo Christian references but I think Morpheus is my favorite since he named himself after the Greek god of sleep and dreams.

How this can be applied to writing: Naming characters after historical or religious figures or places can add extra depth to your characters. Now this is a concept that works best in science-fiction because in fantasy it can seem a little out of place since that world doesn’t share our history but it can be a fun Easter egg if pulled off well such as how in Falling Skies Tom Mason and his sons were named after a Union soldier and his three sons in the Civil War or Cassiopeia in the 5th Wave was named after the brave Greek mythological figure and constellation.

2.) Weaving in Allegories - Usually religious allegories are more of a fantasy thing but the Matrix trilogy has strong allegorical references. Neo and Agent Smith have very similar interactions and character traits as Jesus and Lucifer. Agent Smith sees himself as a perverse savior. Neo ends up sacrificing his life for humanity and then comes back to life. The two of them have a climactic battle for humanity.

How this can be applied to writing: Allegories are tricky and range from very obvious like Aslan’s sacrifice for Edmund in the Lion the Witch and the Wardrobe or more subtle like Gandalf’s sacrifice and rebirth in the Lord of the Rings. How strong or subtle your allegory really depends on your audience. Take into account things like age and religious affiliation. Allegories don’t have to be limited to religion either. You can do allegories of events that happened in history or myths too!

3.) Take Care Fight Scenes Don’t Go On For Too Long - One of my critiques for the series is that the fight scenes in the second and third films go on for too long. It feels like the story stops to have a fight scene with a lot of kickbutt moves. The worst offender is the car chase in Matrix Reloaded. The fight scenes for the first film were just the right length. Long enough to build suspense but short enough so it doesn't feel like the story is pausing for some punches, swords, and guns.

So what do you do if you just have to have a long battle scene like for a war? The Lord of the Rings: Return of the King has a very very long battle sequence with the Battle of Pelenor fields but this is broken up by intermittent scenes like the plot thread with Aragorn, Gimli, and Legolas getting the Dead Army. In Kingdom of Ash by Sarah J. Maas she uses a similar technique while Aedion is fighting a long battle.

4.) Nicknames for Baddies - In the machine world there are a bunch of bad robots called sentinels that the rebels nickname "squiddies" because of their squidlike appearance.

How this can be applied to writing: I feel like it's a very sci-fi thing to nickname your baddies (such as Skitters and Harnesses in Falling Skies), but this was also done historically like Revolutionary troops calling the British soldiers redcoats, bloody backs, or lobsters (because of their bright red military coats) or Americans calling German troops Heinies (short for Heinrich) in WWI. These nicknames are derived mostly from appearance. These were given to be insults but I also think that these nicknames can help make the enemy feel less scary to the fighters, so it helps them psychologically.

In the case for Falling Skies, the characters didn't know what the Skitters were actually called so they had to come up with their own name. Also remember that nicknames may not be universal. In the case of the Skitters they're also called Cooties, Cockroaches, and Chinchas by other people.

5.) Make Sure Swears Fit Your World - Another critique of the Matrix trilogy is their swears. They use God's name as a base for many of their swears, but it just felt so out of place since the people of the world of the Matrix don't seem to know who God is since they don't practice the Christian religion. Perhaps the natural-born humans found out about it from people who've been in the Matrix, but it still felt awkward to adopt a swear that isn't part of your lifestyle in some way.

How this can be applied to writing: Swears have a base in something usually excrement, sex, someone's intelligence, or genitalia. When your characters use swears they have something to do with daily life. All of the aforementioned things are the more vulgar and crude parts of humanity, so usually, a made-up swear has something to do with that. For example in The Maze Runner the boy's made-up swears mostly have to do with bodily functions like "klunk" or in Firefly they have words like "rutting" or in the Witcher 3: Wild Hunt "plowing." You can figure out what those last two are in reference to.

If it has to do with religion then it's more logical for them to use swears that have something to do with a known religion. If that makes sense. Such as how in The Chronicles of Narnia characters swear by Aslan's mane or in the Witcher Skelligans swear by the goddess Freya.

Conclusion - Though the Matrix trilogy has its flaws it's still worth a watch if anything to get a million cultural references.