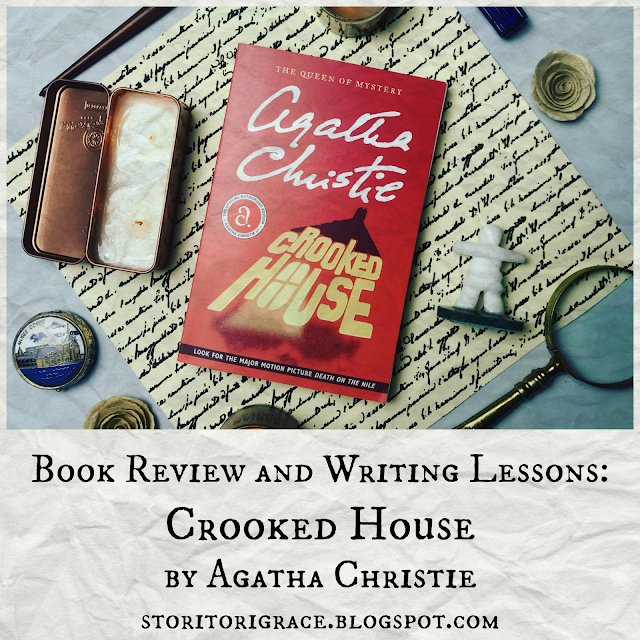 The Leonides are one big happy family living in a sprawling, ramshackle mansion. That is until the head of the household, Aristide, is murdered with a fatal barbiturate injection. Suspicion naturally falls on the old man’s young widow, fifty years his junior. But the murderer has reckoned without the tenacity of Charles Hayward, fiancé of the late millionaire’s granddaughter.
Genre: Adult Mystery
Publisher: William Morrow Paperbacks; Reissue edition (February 1, 2011); Originally Dodd, Mead and Company (March 1949)
Page Count: 256 pages

I've become an Agatha Christie fan in the last year, so I've been itching to get my hands on another one of her mysteries! Crooked House is considered one of her best, so I decided to give it a go!
The Plot: This is a pretty straightforward murder mystery. A man was murdered, someone comes to investigate, a lot of questions are asked, answers are slowly revealed, and then a twist at the end. Though I do have to say the twist for this one was very unexpected. The strongest part of the book is the ending. It had the most emotion to it.
Like And Then There Were None, the title is also based on a poem which gives a sinister nature to the book:

The Characters: This novel has another large cast, but it's all told through the first person point of view of Charles Hayward. He is a layman in mystery business but he's very involved since his fiance is a family member of the victim. He's a bit of a Mary Sue, but he has a good heart and cares for Sophie, Brenda, and Josephine.
The rest of the cast have interesting features, especially with their checkered history and the fact that just about all of the family members had motive to kill Astride Leonides, but Josephine stood out the most. She had the most defined personality and I thought it was kinda cute how she wanted to solve the mystery alongside Charles.
The Setting: The majority of the book is set in the Three Gables or the Crooked House in Swinly Dean. It's an old estate of odd architecture in England.
Epic Things: I thought it was kinda funny how telegrams were used like text messages between Charles and Sophie.

The Theme: What makes a person capable of murder? That's the essential theme of the book.

"Murderers are set apart, they are 'different'--murder is wrong--but not for them--for them it is necessary--the victim has 'asked for it,' or it was 'the only way." Page 113
"I think people most often kill those they love than those they hate. Possibly because only the people you love can really make life unendurable for you." Page 113

Content Cautions: This is a murder mystery so there is some violence: a man and a woman are mentioned to have been poisoned, someone commits suicide, and someone is knocked unconscious with a brick. There's a good bit of smoking cause this is the 40s and there's some mild swearing with a couple usages of hell, d*mn, and a**.
What We Can Take Away For Our Writing:

*POSSIBLE SPOILERS*
1.) The Creepy Kid Trope - Josephine is a very disturbed child. She has very strong likes and dislikes for people and enjoys the macabre like how Jezebel was eaten by dogs in the Bible. But at the same time, she has this innocent air that's endearing.

How this can be applied to writing: I don't know if Agatha Christie made up the creepy child trope, but she did a really good job of it. Disturbed kids can add a really creepy tone to any story. The mix of innocence and sinister behavior is unnerving.
*END OF POSSIBLE SPOILERS*

2.) A Layman's Reason for Having to Solve a Mystery - Charles reason for getting involved is that he's very in love with Sophie and she doesn't want to get married until the mystery of her grandfather's death is solved. So though Charles isn't a detective, he is very emotionally tied to the case.

How this can be applied to writing: When you think of mysteries most of the time you think of Sherlock Holmes, Nancy Drew, Hercule Poirot, or the Hardy Boys. All of these detectives or consultants, but it can be interesting to just have a random person thrown into a mystery and to see how they deal with it.
In Comparison to the Film: Crooked House (2017) was pretty close to the book, but for some reason, the screenwriters changed some random details, like making Charles a private detective and making him and Sophie at odds. The casting was pretty good, but most of the movie seemed to meander until the end where it was pretty much nailed. So overall it was an okay adaption. Not great. Not bad.
Conclusion: And Then There Were None is still my favorite Agatha Christie mystery, but this one is definitely worth a read.

About the Author: Agatha Christie was born in 1890 and created the detective Hercule Poirot in her debut novel, The Mysterious Affair at Styles (1920). She achieved wide popularity with The Murder of Roger Ackroyd (1926) and produced a total of eighty novels and short-story collections over six decades.
Other Books I've reviewed by this author:
A Book Review of And Then There Were None by Agatha Christie