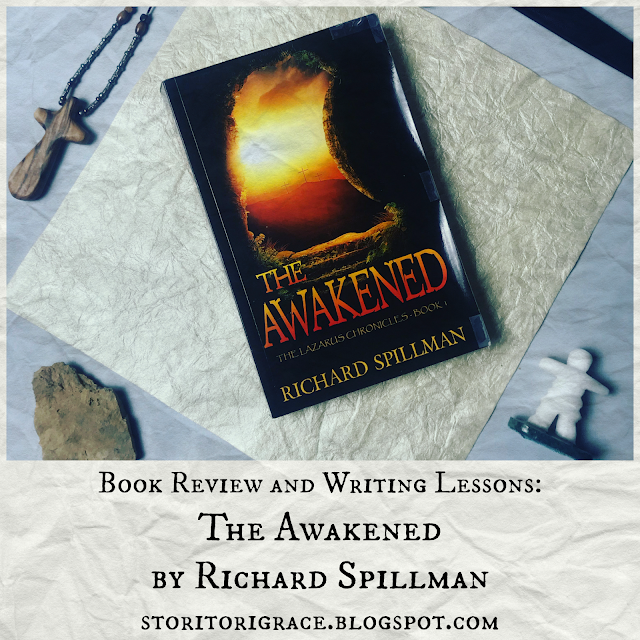 
The Plot: This more of a supernatural thriller because there are some fantastical elements. It’s one of those hidden world type books where a struggle of good and evil hides in plain sight like Mortal Instruments or the Spiderwick Chronicles. Most of the bad guys are demon possessed resurrected people called UnDeads. The book focuses on thwarting terrorist plots around the world, but there are also a lot of subplots that focus on characters. One prominent one is characters reading Lazarus’s diary that focuses on his experiences after being resurrected by Jesus. It was interesting seeing his point of view of the Crucifixion.

The drawback about these Awakened who can’t die or be hurt is there isn’t much of a sense of peril for them. There’s some for the people they’re protecting but I was a little puzzled by some of these Awakened needing to be protected. I mean torture wouldn’t work because they can’t be hurt.

This is heavily CBA. Most of the characters are Christian and this is targeted to a Christian audience because characters frequently pray and some go to church. It’s the exception not the norm in this group to be non-religious. When one character comes back to life some people in the church suspect him of demon possession or that he went to hell when he died and not heaven. It’s hard to believe there’s people still like that anymore.

The Characters: It’s hard to define a main character in this book because the story goes into so many points of views. I thought it was going to be Bobby, a newly resurrected man, but it turned out to be more like Lazarus which I preferred because Lazarus is the most interesting character. I mean there’s so much to unpack about a man who’s lived for over two thousand years and has met famous people of history. He also has a decent character arc.

My other two favorite characters were Ariella and Ricki. Ricki seemed the most human. She deals with a lot of deep issues and I like her little something something with Lazarus. Her dealing with PTSD was really accurate. I liked the detail of her having the aversion to the color yellow.

Ariella has a kind personality and her love for The Wizard of Oz is cute. Matthew, Lazarus’s Polish friend, was cool too. Yay for Polish peeps!

None of the other characters were particularly striking to me. The bad guys were interesting and definitely evil. Their obsession with naming things after their objectives was interesting like “merikh” meaning “death.” I also felt like the portrayal of Middle-Eastern people was fair. I’ve read another book that was just outright racist about middle-eastern terrorism, but this one felt far more realistic. Bad and good characters are shown. A prominent character named Assam is middle-eastern and a young UAE girl pressured into becoming a suicide bomber and a large plot line is trying to save her from it.

The Setting: Most of the book is set in Seattle and The United Arab Emirates which are two interesting places.

Epic Things: The best scene to me was when Lazarus and Ricki went to Washington DC and sat in an orchard of cherry blossoms with one red oak tree. It was a really pretty picture. I also appreciated the brief Lord of the Rings reference.

The Theme: The main theme is that all life is precious (P 295). The members of SOAR, the resurrected people organization, prioritize the lives of Naturals (normal people) at all costs.

Content Cautions: This is an adult thriller so there’s gonna be some violence. This includes suicide bombings, throwing up blood, a detailed account of the Crucifixion, a bad guy threatening to drop a baby of a roof, and then some gun shots and bombs going off. The most severe amount of content is the mention of an incest child rape. Also someone chews tobacco.

What We Can Take Away For Our Writing:
What To Do If Someone’s Heart Stops - In this book someone’s heart stops and immediately the doctors resort to a defibrillator  to shock his heart back into beating. This is incorrect.

How this can be applied to writing: It’s very theatrical in movies, books, and shows to shock someone with a defibrillator or inject them with adrenaline, but to save some from death your best bet is chest compressions to keep blood flowing to the brain. Do your research.
Conclusion: This book was decent. Not bad, not thrilling.

About the Author: Dr. Richard Spillman founded the Kingdom is Near Ministries (KIN). Through KIN he has supported an orphanage in Uganda as well as a church/school for kids from conflict zones in the Philippines. He has small teams on short term missions into slums and jungles around the world. He has also taught in DTS for YWAM in Mali, South Korea, India and the Philippines.