7 Tips on How to Give Your Shorts Stories the Power of a Tornado, A Guest Post by Cassia Taylor 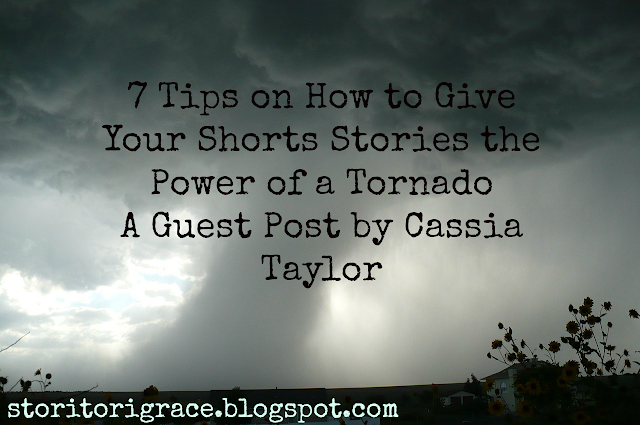 This week is a very special post, because one of my good writing buddies Cassia Taylor is guest posting for us today! I'm so excited! I've been trying to get her here forever. Since I don't specialize in short stories, I've gotten my lovely friend to write on that. I hope you enjoy her tips! On to the post!


Among the writers I’ve met, not many who write short stories. Usually it has something to do with not being able to make a story short. As writers, we’re in love with developing our own unique world and exploring backstories of characters. We love having subplots and battles and confronting side characters that will become important later and it’s hard to cram all of that into a few pages.

It took me a lot of time and effort to get to the point where I could shrink an idea so it didn’t runaway on me and become its own trilogy. Now that I’ve gotten there, I can say with certainty that knowing how to write a great short story will help you with your other writing endeavors.

Before we begin, I’d like to answer the inevitable question: word count. Ideally your short story should be under 7,500 words. Any more and you might as well be writing a novelette. (up to 17,500 words) If you’re writing a short story to get published though, I would recommend capping it at half of that (taking into consideration the magazine limit as well). I’ve learned that most magazines pay per word so the shorter your story, the less they have the pay you and the more likely they are to accept your work. If you’re just writing for fun, go all out!

Now let’s get onto the good stuff!

1.) Short Stories are like Tornadoes, Novels are like Hurricanes - This is my way of seeing the differences and similarities between the two mediums. A short story will roar past you all at once, covering specific thematic areas. It throws you into chaos suddenly but briefly. When it’s over you’re left wondering what in the world that storm was and where it came from. Then you look back on its path and think about the ‘damage’ it’s done.

A novel takes longer to get through—just like a hurricane, it’s quite large. However just like the tornado, you will look back on the storm when it passes and observe the after effects of it.

When you put the two storms side by side, the hurricane covers a much larger area whereas the tornado had one path and did its damage in a more concentrated area.

2.) Know Your Theme Before You Write - What are you going to tell the world? What questions do you want the readers to ask? Like a novel or poetry, this is your chance to express your worldview and opinion on a topic.

In short stories, the theme is incredibly important because every element of the story must surround that one central idea. In a novel you can explore many different themes and sub-themes but not with shorts. You must know what you will focus on while you write.

Once you choose your topic, I suggest you figure out your ending. Your ending will dictate exactly what you’re trying to say about your chosen topic. Since the ending is the reader’s last taste of your opinion, you need to finish the story correctly. If you don’t, the reader may make a conclusion that you didn’t intended for them to make. Think carefully about this one.

3.) Assume Your Readers are Detectives - You don’t have a lot of words to deal with so you can’t afford to space out your backstory like you would in your novel. (And that definitely means no dumping either.)

Instead, drop the slightest hints. You do these things in novels too but in shorts, these things don’t ever need to be explained fully. Based on the other evidence you give, your reader should be able to piece it together without even delving too much into interior monologue. You should know the backstory inside and out but your readers might never get to and that’s okay.

4.) Keep Your Characters and Settings to a Minimum - Too much of either will overwhelm your reader and take away from your message. While I was in Florida for the Florida Christian Writer’s Conference, I attended a workshop where I was told that a good reference is one character for every 300-500 words. I wrote a short that’s 700 words, has one setting and two characters and guess what? A magazine picked it up!

While you want your story to be complex, adding characters and settings isn’t the best way to do that. You want to add depth, not breadth to you story.

5.) You Don't Have to Name Your Characters - Not a lot of people know this one so I want to address it. In our novels, naming characters is important because we have a lot of them and we also spend a lot of time with them so naturally we want to know who they are. When it comes to short stories though, we can afford to leave out names. For one, we don’t have as many of them, and for two, we don’t spend a lot of time with them either so there’s not as much of a urge to know their name.

When I think about the shorts I’ve writing, I think 98% of my protagonists are nameless. Wait, what? Why?

I find this has a very meaningful effect. By leaving your protagonist nameless you give the reader the opportunity to insert himself or herself into the position of the character. Especially when you write in first person, you let them be the protagonist. Your theme suddenly will become more relevant to your reader because the story now seems like it’s about them.

When writing in third person, you can refer to your character as “the man” or “the girl” or “the old lady” and it gives a more distant perspective. Depending on how you write it and what the story is about it can have one of two effects.

1. The character can be paralleled to anyone or even represent humanity as a whole.

2. The character is in the midst of a crisis of some sort and is unsure of who they are, how to move on, what a certain event means for them etc.

If you choose to name your character, keep it simple and be aware of the fact that some names may date your story. I personally try to stay away from alternate spellings or anything that sounds like it could be in a YA dystopia.

6.) You Have the Elements of Surprise So Use It Well! - Unless a friend recommended a short story to you and told you the premise, you probably will pick up a short story not knowing what to expect. There’s no back cover synopsis to tell you anything.

Like a tornado, they come a little more unexpectedly than a hurricane. Hurricanes are forecasted many days before just as novels have a back cover to tell you what they’ll be like. However, use this power wisely. Confusing the reader is not what we want to do but the shock value has the potential to go up.

7.) Short Stories are No Excuse to Be Lazy with Writing - Yes, you have less words but that’s no reason to make your story simple. Before I write a short story, I’ll map out symbols, extended metaphors, archetypal elements, motifs, and setting elements that all relate back to the theme. Your short story should have the capability of delivering the same thematic message as a novel just in a different way.

It’s just like the tornado and hurricane analogy. Both leave an impact, just one covers more ground than other.

So there’s my super short crash course on short stories. I could probably go on for a while but I’ll refrain. If you have any questions though, feel free to ask away in the comments below. I’ll be lurking on Tori’s blog (sorry, Tori, I didn’t ask permission to lurk) so that I can answer anything you want to know.
Have you written any short stories? Do you have further questions about short stories? What is a favorite short story you have read? 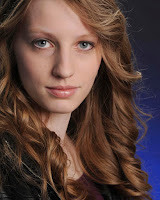 Cassia Taylor is the kind of person who wears jeans and zip-up hoodies in the summer but is stubborn to bring a jacket anywhere in the icy Canadian winters. She’s an aspiring novelist who hopes to use her writing to share God’s truth with the world. In the meantime, she writes for the faith/life blog, “9words”, writes and films visual poetry and takes her camera outside to capture story through everyday life. Soon she is the be published in Imaginate and Splickety magazines for her poetry and short stories. You can find her on her blog Dimensions of My Universe.

Victoria here! Thank you so much to Cassia for guest posting! Be sure to check out her blog and leave her lots of wonderful comments!