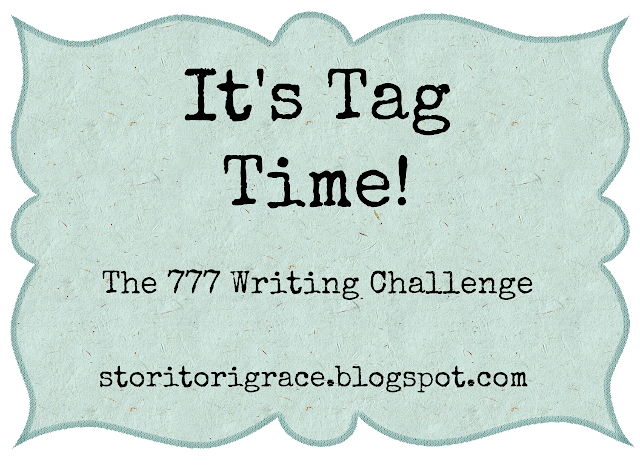 Here is yet another tag Adriana Gabrielle has tagged me I'm finally getting to lol. This is why I needed the Friday posting day.

The 777 challenge requires you go to Page 7 of your work-in-progress(wether writing or editing), scroll down to Line 7 and share the next 7 lines in a blog post. Once you have done this, you can tag 7 other bloggers to do the same with their work-in-progress.

And to double the fun I'm going to take an excerpt from both Red Hood (steampunk fantasy) and Subsapien Biomech (science-fiction). (The italics makes the lines look too long, but I assure you it's seven lines lol.)

Annette sat on the ground, clutching her leg and holding back sobs. Blood poured from the butchered flesh. Suna fought a werewolf with her twin sabers, and the hounds still bit and scratched at the others—but one lay in a pool of its own fluids, motionless. Some of the werewolves tried to reach the log, but Dina and Oske kept firing.

Mor jerked out her blood and ooze-coated axe as Suna finished off the werewolf. They were getting overwhelmed. No. They could handle this. They would keep them back. “Suna, get Annette to safety!”


She nodded and hurried over to them.

If you'd like to know more about Red Hood check out the Beautiful Books link up Part one, two, and, three, and Claes and Mor's interviews!

Soon he could hear footsteps, then five graftings ran into Bryce’s section of the maze. They were as tall as Emil, at least six feet each. All of them had wings and tails and other animals parts from all of the different kinds of graftings. They all only wore hospital pants except the one female who wore a bra too.

Their eyes were either black from their dilated pupils or constricted until their pupils were just a slit. Their teeth were bared, their tails swished, their wings were spread aggressively, claws out and the line of hair going up their backs standing on end. They approached Bryce slowly.


They were going to kill him.

If you'd like to know more about Subsapien Biomech, check out a tag about it as well as Bryce, Caleb, Pro, Cynara, Judah, Able, and Matt's interviews. ^ ^

And that's it! I hope you enjoyed a little sneak peek of my stories and thank you for reading! Have you done this tag before? What are some short excerpts from your stories?