Writing vs. Editing: The Different Mindsets 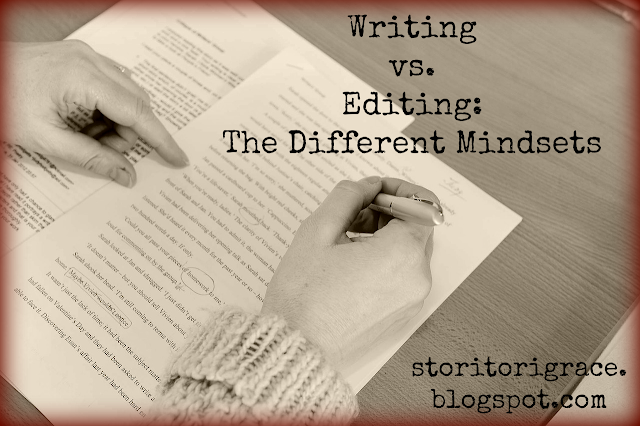 Editing is the hated counterpart of writing. Some people will get as far as writing a full manuscript, but will ditch their story in fear of this difficult but hated stage. I'm once again taking the plunge and editing one of my books. I believe some others are about to work on edited their NaNo novels around this time, so I thought this would be a good time to analyze the differences of editing and writing. Perhaps by understanding the differences this can help with this odious editing dread.

1.) Editing Takes More Concentration Than Writing - When editing, especially line editing, you're combing through every bloody sentence in your entire novels searching for flaws, every typo, every grammatical error, ever little issue. You're squinting at the screen eyeballing every solitary sentence. If you're distracted then you could miss something and the point of editing is to not miss something.

When writing you can just word vomit and you can say you can fix it later.

Since you're editing ... it's later now.

2.) Writing is Faster Than Editing - There are some faaaast writers out there. They can type 800 hundred words in a minute or 60k in four days or one million words in a month. Speed demons and inhuman they are. Editing on the other hands requires you to be turtle slow. It's why I don't get the point of editing wars. If you war with editing then you could miss something in your effort to be speedy. Yes, we want to get it done, but don't we want to get it done right? Editing needs to be slow and steady yet still making progress. It's tough but worth it in the end.

3.) It's Very Difficult and Probably Ill-Advised to Multitask and Edit - I've seen a lot of people who can watch TV or listen to podcasts or be in an area with a lot of people when they write. When you're just typing words to get the bulk of a story down, I suppose that's acceptable, but with all of those distractions I bet in the case of editing a person could miss a bunch of errors. Thus instead of having the freedom of doing more than one thing, you're restricted to just one. Personally I can't even listen to music while editing or I miss stuff.

4.) Editing Can Be More Tedious Than Writing - While writing you're experiencing the story for the first time and maybe you even have that same thrill when you're rewriting for the second or third time because you're discovering even more new stuff. But in editing you usually have to go over something more than once, something you've read over and over, striving to perfect. You have to keep scraping at your manuscript until it's finally finished and believe me, this can get old.

5.) When You Edit You're Discovering All of Your Novel's Flaws - This I believe is the single biggest reason why people hesitate editing their story. It's when you find out where all you messed up. Those plot holes, typos, grammatical errors, cardboard characters, inconsistencies, flat dialogue all slap you in the face. You start to doubt you're a good writer. You headdesk when see all of the obvious mistakes you made. You consume yourself in chocolate to battle the depression.

The purpose of a first draft is just to get the story out, it's to create the clay that's going to be a beautiful work of art. Yes, your work is going to be flawed. It's going to be an mess, but when a miner unearths a hunk of clay it's going to be ugly at first. It's just wad of something that resembles dirt. Don't think of editing as a form of drudgery coated in dread and revulsion, think of it as molding and firing and painting the fine details onto your masterpiece. You're polishing it and making it beautiful.

Conclusion - Editing is a lot of work. Last summer it took me three hours to edit twelve pages of my book and I did that every night for around two months until that baby was finished. And you know what? I still missed stuff. That's why I had amazing betas to sniff out the things I didn't detect. Editing may not be the funnest part of writing, but it's still very important and it'll be worth it in the end.

So shove aside the fear, pull up that document or click that red pen, and get started!


Are you editing your novel? Have you edited a novel? Do you like editing?


You may also like:
Extending Your Novel: How to Make the Story Longer Without Just Adding Fluff
Description: It's Gotta Be Just Right
Writing Lessons from Anime: Interior Monologue and Thoughts
Six Tips For Line Editing
How Sentence & Paragraph Structure Can Boost Your Book