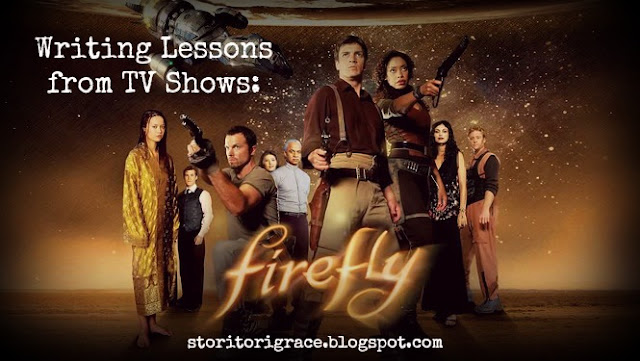 Firefly, one of the biggest television tragedies ever. It's such an amazing show, but because of network flubs, it was cut short. I've rewatched this crazy mash-up of a television program three times and after each watch, I am both happy for the little I have to enjoy and sad that there isn't anymore besides the much-appreciated conclusion that is Serenity. This show grew into popularity after its release and for good reason. Space pirates with Chinese elements and a galactic alliance? How cool is that?

Not only is this show exciting, funny, and it includes Nathan Fillion (squeeeeeeeeeeeee), but it has many aspects we can gather about writing. I've wanted to do a post on this show for a while and it's high time I've done it. In the past, I've done reviews on many Firefly inspired teas from Adagio, including Captain Mal, Zoe, Wash, Kaylee, Jayne, Shephard Book, Inara, Simon Tam, River Tam, and, of course, Serenitea.

If you have one of those, grab a cup, and let's get this boat moving.

1.) Genre Mash-up - Cowboys + Spaceships = Firefly. That alone is simply brilliance from the infamous Joss Whedon (He also directed the Avengers films and created Dollhouse). Combining these two genres is one of the many elements that makes Firefly so unique. It creates an interesting environment and themes the show with a rustic sci-fi air with events like transporting cattle, a train heist, and even riding in a covered wagon, add to that superior technology, spaceships, and creepy science experiments and you have the fantastic world that is Firefly.

How this can be applied to writing: Worldbuilding is so essential for a good speculative story. Have you ever thought of mashing together two genres to create your world? Like 1950's Historical with Fantasy or clockpunk with Romans? Be creative. Combining two genres can make your world unique and stick with your readers. 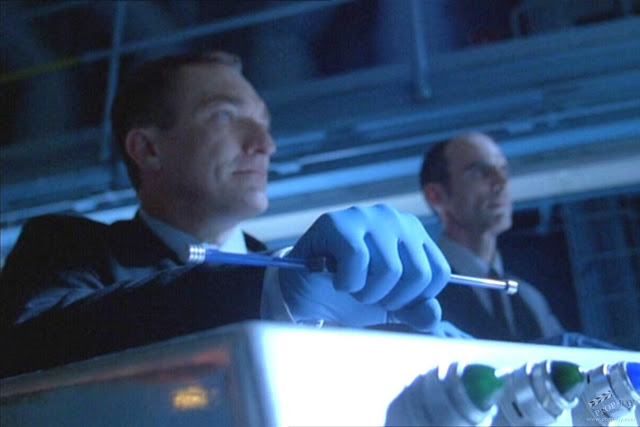 2.) Culture Mash-up - Whedon didn't only make a space western, but he made a space western with Asian elements. He wove together 1850s settlers with Chinese citizens. This further made the world of Firefly stand out. We have the Southern accents of the common folk, the proper accents of the rich folk, and the integration of Chinese for trading and for insults. The people of Firefly have to be bilingual. We also see the culture integration in their clothing, mixing suspenders with paper parasols. And we also see it with cuisine such as noodles and canned beans.

How this can be applied to writing: Can you merge two cultures for your storyworld? African with Scandinavian? Islander with with European? The options are endless! This can add further depth and uniqueness to your world.

3.) Otherworldly Slang - One of the most famous things about sci-fi is the many slang words the show possesses. Gorram, shiny, ruttin', boat, and brown coat are just a few. You also have to figure out what these words mean as the show goes, but this "secret language" of the citizens of the Firefly universe adds even more intricacy.

How this can be applied to writing: Can you add slang to your world? Slang is the natural progression of language. We tend to shorten, abbreviate, and nickname words throughout the years. New slang develops and changes yearly. In the 20s we said "That's a scream!" and now we say "That's the bomb!" 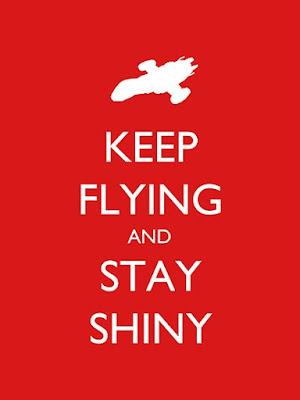 4.) Characters with a Twist - Each Serenity crew member takes an archetype and puts a turn on it. Captain Mal is a smuggler, but he was a member of the Brown Coats Rebellion. Wash is a pilot, but he's an extremely eccentric guy and he's married. Zoe is Captain Mal's army buddy, yet she married Wash. Jayne is a brute, yet he has an inner sensitive side, especially for his mom. Shepherd Book is a preacher, but he has a dark past. Kaylee is a savvy mechanic, yet she's the sweetest, darling thing you've ever met.

Do you see where I'm going with this? The character is a typical type, but ... The "but" is the key.

5.) Characters Possessing Different Worldviews - There are many different worldviews among the Serenity's crew. Shepherd Book is a preacher and the most morally north. Captain Mal has a set of beliefs, but they're also flexible. Inara, as well as many other people in the Firefly universe, believe adultery is acceptable. Each of these worldviews not only adds natural diversity among the characters but creates tension between characters because many of these beliefs conflict. Conflict makes a more interesting story.

How this can be applied to writing: Have you ever read a book where it feels like everyone thinks the same way? I know I have. It's just not realistic for everyone to believe everything exactly the same way. There's always going to be something that's a little different. Like I've mentioned before diversity in opinions will also bring much wanted conflict for your characters. How can you make sure your characters think differently? What are your characters' worldviews?

Conclusion - Though Firefly is such a brief show, it is a gem. It's not only a great watch but can teach us much in the way of writing. Thank you, Joss Whedon, for this incredible program!