So Your Character is From the Philippines ... Featuring Andrea Salvador 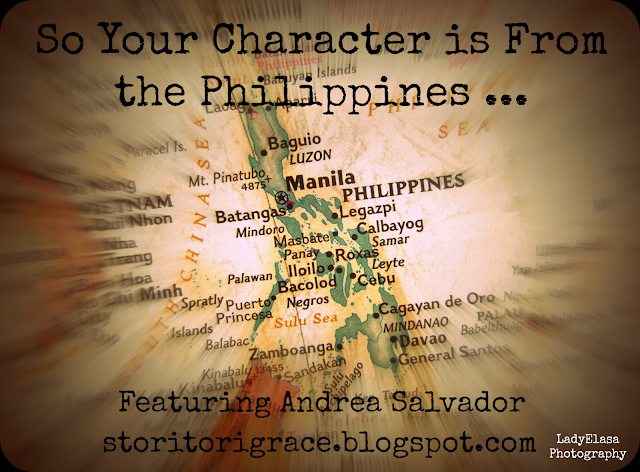 It's time for this month's So Your Character is From Another Country! This is a monthly or bimonthly segment where I interview lovely volunteers from around the world to give you a firsthand account of being a citizen of their respective country. I'm hoping to encourage international diversity, break stereotypes, and give writers a crash course on how to write a character from these different places on our planet. If you haven't checked out last month's So Your Character is From England or Scotland ... be sure to hop on over there and give it a read!

I honestly didn't know much about the Philippines before reading Andrea's answers to these questions. I had seen some movies and shows where the country is mentioned such as Bourne Legacy and Grimm, but her answers have really opened my eyes to this fascinating part of the world.

I am Andrea Salvador, a Filipino who now lives in the capital Manila after recently moving from one of the small provinces in the Philippines. If I’m not in school (which consumes a lot of time), I’m writing Western-influenced stories, reading, and eating taho.
Pinterest//Twitter

In the province I grew up inm we would have an annual festival to honor Sto. Nino, and it is called the Dinagyang Festival, which features street dancing and a beauty pageant. Aside from the Dinagyang, there are also fiestas which occur in every city and ‘barrio’ to celebrate its patron saint.

For those interested in history, some landmarks we have are Fort Santiago-where are national hero Jose Rizal was held waiting for his execution in Rizal Park, the town of Vigan-which has the architecture of the colonial Philippines (Spanish-flavored; their method of transportation around Vigan is drawn carts), and the baroque churches that have been around for hundreds of years.

As for ‘unique’-I would have to say we are very superstitious. Two beliefs that are at the top of my head right now: Black ants in the household mean good luck, and wearing polka-dots on New Year’s Eve brings good luck as well. (Yeah, we kind of have an obsession with luck, good or bad.)

Tell me about your country's environment. What are some of your favorite places?

Our country has 7,107 islands (We have to memorize this in school-I’m serious), and so cities are separated from each other by water-providing a lot of beaches. Growing up, I lived near a place called Boracay, which was known for its white sand beach, and once I went to Palawan, which is known for its’ underground cave. I’m not going to lie and just say I’ve become urbanized and enjoy hanging out in our malls since the weather here is always hot.

Tell me about your country's food. What are some of your favorite dishes?

I think the food all of us Filipinos consider rice as our staple dish plus the main dish, ‘ulam’. Filipino food I enjoy the most is lechon-roasted pig, pork adobo-pork marinated in vinegar and soy sauce, and sinigang-sour Filipino stew. For dessert I enjoy leche flan-our version of crème caramel, and taho-tofu, sago balls, and sweet syrup.

Oh, and we’re also known to love dipping everything in sauce. When I’m in the States the gravy of KFC is just not the same.

Basing this on Filipino, the national language: some of our words stem from Spanish, so ‘book’ is ‘libro’ and ‘school’ is ‘eskwelahan’ (Spanish). Some English words are also changed slightly-like ‘family’ to ‘pamilya’, ‘candle’ to ‘kandila’. We also traditionally use ‘po’ at the end of a sentence when we are talking to an elder person to symbolize respect.

Filipino words I commonly use even when speaking English (it just slips out) are ‘Diba’-which means ‘right’, or ‘isn’t it’, ‘Parang’-which is ‘supposedly’, and ‘Daw’-which means ‘according to’ or ‘it is said’.

For most Filipinos it’s the same while on weekends some of my friends go on road trips to their local province to visit their family members living there. I go out to the mall but as a family we always attend Mass (we’re Roman Catholic like most Filipinos are) in the afternoon, and we take our Mass schedule seriously.

I’d like to think of every day as really simple minus the cold and snow, because forget about wearing jackets and having snow days, because I constantly have to face the truth about our country being tropical and being the home of lots of typhoons. 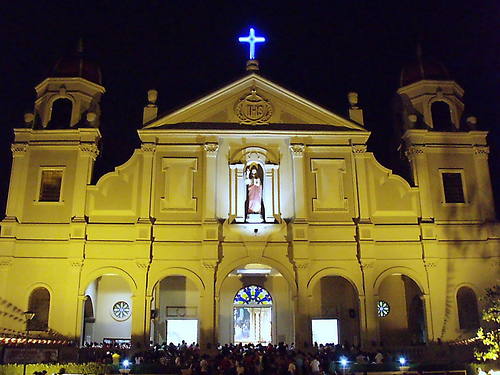 Culturally, I’d say Filipinos are ‘related to anyone and everyone’ and maintain close-knit families. I have people I call my aunts and uncles/titas and titos, even though we aren’t related by blood. In our household, we have lunch and dinner as a family everyday if we can help it.

Aside from that, every province has their own native dialect, and since I lived in a province, I learned not only Filipino, but our dialect as well-but yes, I’m still the most fluent at English.

In environmental terms, one big difference of us Filipinos to Americans is that the farther you go from the capital (which screams urban), you are guaranteed to find farms and forests, and sometimes, not even a single building if you’re really in the outskirts. For transportation we make use of jeeps, cabs, and tricycles as our public services.

Just an addition, for school, we tend to start pretty early and get out late especially if we have extra-curricular like sports, and I’ve learned that while Americans have spring break and we sembreak. Our summers are different as well-we end school on March and get back on June.

… and Netflix isn’t a norm here. 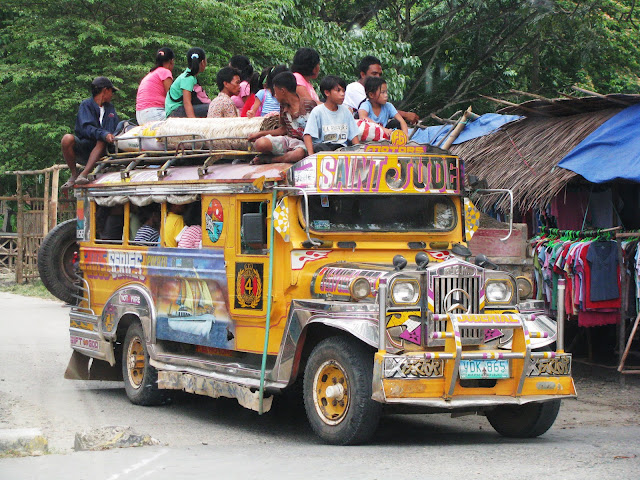 Briefly describe three historical events of your country's that you feel are important.

Rizal is our country's national hero, using the written word as his weapon against the Spaniards who colonized us. He wrote two books, Noli Me Tangere and El Filibusterismo, which gave Filipinos insight of how the Spanish were treating them, and hope to be liberated. Because of his death, the Filipinos became more and more courageous and defiant in the Philippine Revolution.

Desperate to gain freedom from Ferdinand Marcos' dictatorship and power corruption, around two million Filipinos rallied in the street of EDSA to remove Marcos off his position. However, the whole revolution was very peaceful and involved Filipinos praying, singing patriotic songs, and people running to army tanks and vans, kneeling before them and praying. This changed the entire view on revolutions being bloody and violent, and showed that having a peaceful revolution was possible.

This cry is regarded as the start of the Philippine Revolution. May of our Filipino heroes, led by Andres Bonifacio, brought out their cedulas, yelled 'Long live the Philippines!' and ripped their cedulas (residence certificates from the Spaniards). This is still regarded as a symbol of courage, patriotism to our country, and their disregard for Spain to continue oppressing them.
What are some stereotypes about your country that irk you?  What media portrays your country badly be it a movie, a book, or a TV show?

Filipinos have this ‘reputation’ for interchanging their ‘v’s and ‘b’s, and their ‘f’s and ‘p’s-I’m sure there is a decent number of Filipinos with that accent, but not all Filipinos do. There’s also a stereotype which is discussed more in the next question: that all Filipinos working abroad are domestic helpers/call center agents. Another stereotype: the belief that Filipinos eat dogs. I’ve never eaten one nor seen any Filipino eating one. I’m sure there is one Filipino out there who does eat dogs, but we don’t consider it as regular food. Seriously.

I’ve never come across any form of media that has portrayed our country badly personally, but I have heard about a certain Chinese textbook that depicts Filipinos as ‘domestic helpers’. There are a good portion of Filipinos around the world who are domestic helpers, but not all are. 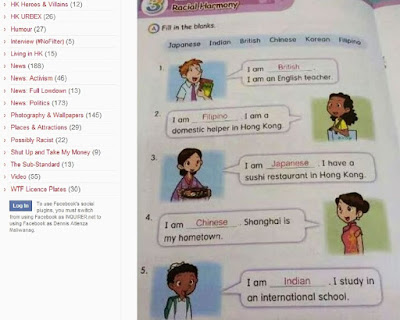 There was one episode of Grimm I really liked, and it featured a Filipino folklore about the ‘aswang’, a mythical creature that feeds on unborn children/pregnant mothers. I feel it was really accurate and on point, and there was even a scene wherein the American characters called the Filipino ones all the way in the Philippines, and you could hear the Filipinos talking and interacting, getting to see the overall environment.

Who are your top three favorite characters native to your country in books, movies, or shows?

I can’t say I have a top three list of Filipino characters since first of all, I read American/European books a lot and don’t get to read much about Filipino characters, so I’ll just have to say if you pick up any ‘alamat’/legend from the Philippines, there’s a great chance the characters are Filipino… if they’re not talking animals.

Also, if you’re looking for information on Philippine writing style, or simply want to learn about our culture and folklore, picking up a Filipino alamat is one of the best options.